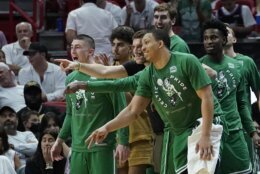 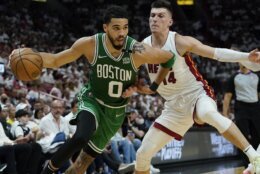 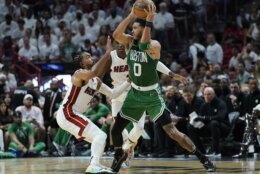 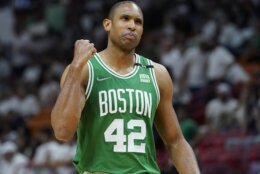 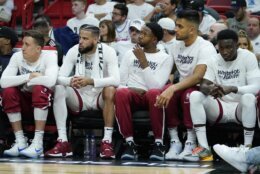 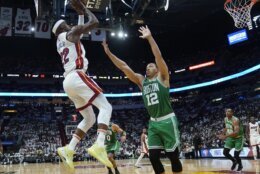 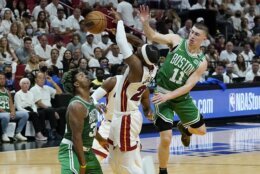 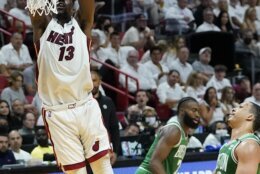 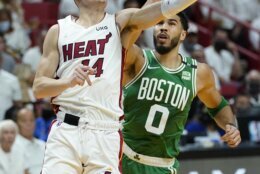 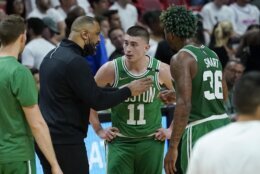 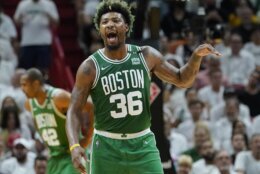 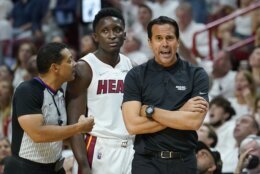 MIAMI (AP) — His team was down by 10 in the opening minutes, and Boston coach Ime Udoka was making no effort to hide his level of disappointment.

His message was simple.

Oh, they listened. And the Eastern Conference finals are all knotted up, the series about to shift to Boston with the Celtics now holding the home-court advantage.

Jayson Tatum scored 27 points, Marcus Smart and Jaylen Brown each had 24 and the Celtics went on a massive first-half run to roll past the Miami Heat 127-102 on Thursday night in Game 2 of the series.

“Guys have pride and looked at a golden opportunity that we kind of lost (in Game 1) and thought we could do much better,” Udoka said. “And we did that tonight.”

Smart was a rebound shy of a triple-double, after adding 12 assists and nine rebounds.

Grant Williams scored 19 points for Boston, which used a 17-0 run late in the first quarter — fueled by five 3-pointers in the span of six possessions — to take control. Payton Pritchard and Al Horford each had 10 for the Celtics.

“We were pretty confident,” Pritchard said.

Jimmy Butler had 29 points in 32 minutes for Miami, which fell to 7-1 at home in these playoffs. Gabe Vincent and Victor Oladipo each scored 14 points, and Tyler Herro added 11 for the Heat.

“This only counts as one,” Heat coach Erik Spoelstra said. “That’s what the experienced players in the locker room and staff understand. We don’t like it. They played extremely well. You have two really good teams and we just have to figure some things out.”

The Celtics — now 4-0 in these playoffs in the game immediately following a loss — made 20 shots from 3-point range to Miami’s 10. Game 3 is Saturday in Boston.

And the margin could have been worse: Boston led by as many as 34 points in the fourth, putting this game on the cusp of really good Celtics history and really bad Heat history. The Celtics’ record for biggest postseason win ever is 40, the Heat record for biggest postseason loss ever is 36, and those numbers were within reach before a meaningless Miami run over the final moments.

Boston trailed by 10 in the first quarter, then outscored Miami 60-21 over the next 18 minutes — a 39-point turnaround that wound up leading to a 70-45 halftime lead.

The 25-point halftime lead was the biggest by the Celtics in any road playoff game, topping a 22-point edge at the break at Chicago in 2009.

“They came out,” Heat center Bam Adebayo said, “and hit us in the mouth.”

Brown had 11 points in the first quarter, when the Celtics went 9 for 11 from 3-point range. Tatum then had 17 points in the second and Boston kept pulling away, on a day where everything went the Celtics’ way. They learned earlier in the day that two starters — Horford (virus-related issues) and Smart (mid-foot sprain) — were cleared to play in Game 2 after missing the series opener.

“I got to get my rest, got to get my health back, got to watch and see some things and come out and execute in this game,” Smart said.

And the good news kept coming well into the night.

Butler did all he could to try and manufacture a comeback, scoring 16 points in the third quarter and getting the Heat within 17. But a 12-2 run late in the quarter by the Celtics restored a 27-point edge. The lead was 96-71 going into the fourth and the outcome was never remotely close to being in question the rest of the way.

Miami didn’t even use its starters in the fourth quarter.

Celtics: Technically, Boston had one other “road” game with a bigger halftime lead. The Celtics were the designated visitor on Sept. 7, 2020 — in the bubble at Walt Disney World — when they led Toronto by 27 at the break. … With Horford back, Grant Williams returned to his off-the-bench role. … Tatum got his second foul with 4:14 left in the first, after charging into Butler. The entirety of the 17-0 run came with him on the bench.

Heat: Kyle Lowry (hamstring) sat for the eighth time in the last 10 games. … It was the first game since Dallas-Atlanta on Feb. 1, 2020 in which both teams had a 10-point lead in the first quarter…. P.J. Tucker had Miami’s first five points, all in the game’s first 51 seconds. It was his 863rd career game, the first in which he had five points in the first minute. Those were his only points of the night, and he left in the third quarter with a left knee contusion.