Coupled with the Los Angeles Lakers’ loss to Denver, San Antonio’s magic number for clinching 10th place in the Western Conference is two games. The Spurs (33-45) also hold the tiebreaker over the Lakers (31-47) with a better conference record.

“If we don’t win, it’s different,” Johnson said. “As long as we just take care of business and not really focus on anybody else, just focus on ourselves each and every game, we’ll be fine.”

San Antonio won a two-game weekend series with Portland to complete a four-game sweep of the Trail Blazers. It was the sixth win in seven games for the resurgent Spurs.

Portland has lost seven straight as it limps to the close of the season.

“Beating someone four times is tough no matter who is out there,” said Spurs forward Keita Bates-Diop, who finished with 12 points. “He obviously got into us at halftime to stay focused and stay to our principles.”

Keon Johnson and Ben McLemore had 19 points each to lead Portland.

Collins finished 5 for 9 from the field while playing a season-high 31 minutes after missing the previous two seasons with ankle and shoulder injuries.

As they did Friday, the Trail Blazers took an early lead as the Spurs struggled to adjust without its missing starters.

The Blazers were 6 for 10 on 3-pointers in the second quarter and shot 52% overall in the period. Portland finished 16 for 44 on 3-pointers and shot 40% overall.

“We came out blazing, we just need to finish it off,” Blazers rookie Greg Brown III said. “I feel like we get better and better with that each game — starting off good. We’ve just got to maintain. We’ve just got to keep the pressure on the opponent so we can go ahead and get that (win).”

San Antonio outscored Portland 34-16 in the third quarter to overcome a 13-point deficit.

“Very good second half,” Spurs coach Gregg Popovich said. “First half, the focus just wasn’t there. I thought the Trail Blazers, they played hard and physical and to win for all 48 minutes. Luckily, we woke up at halftime and came out in the second half and did a good job defensively, board-wise, took care of the ball and ended up with the win. That’s the good part.”

Trail Blazers: Portland has lost four straight to San Antonio. The Trail Blazers’ last victory at the AT&T Center was May 8, 2021. … Portland is 27-51, its first 50-loss season since going 32-50 in 2007. … Brown was assessed a clear path foul with 11:30 remaining in the fourth quarter. After committing a turnover, Brown began attempting to wrap up Tre Jones near midcourt on a fast break. … G Kris Dunn received a flagrant foul 1 after hitting Johnson in the head on a layup attempt with 8 minutes remaining in the fourth. Initially ruled a common foul, the penalty was changed after video review. Johnson had to reinsert a contact lens before shooting free throws.

Spurs: San Antonio star Manu Ginobili received a standing ovation after the Spurs honored the Argentinian for his selection to the Naismith Memorial Basketball Hall of Fame. The Spurs showed a video of Ginobili receiving a call from Hall of Fame president John Doleva informing him of the selection. San Antonio then cut to a live shot of Ginobili, who was in attendance — which drew another huge roar and standing ovation. … Murray and Poeltl were both late scratches from the starting lineup. Murray is still battling a non-COVID upper respiratory illness. Poeltl has a back injury. … Collins was a rebound shy of completing his first career double-double on Friday. … C Jock Landale did not return after spraining his right foot 30 seconds into the second quarter. After writhing in pain on the court for about a minute, Landale walked back to the locker room unassisted.

The Lakers played the Nuggets before the Spurs’ game, but San Antonio didn’t watch what turned out to be Los Angeles’ sixth straight loss.

“I was just kind of locked in,” Johnson said. “I knew we were going to short-handed tonight, so I just tried to focus up, get ready for our game. (The Lakers) are going to do what they’ve got to do and as long as we take care of business, we are going to be fine.”

Spurs: At Denver on Tuesday night. 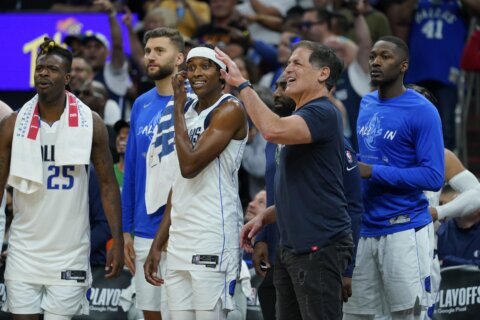