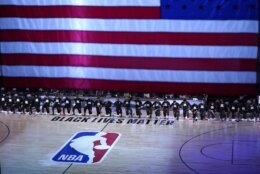 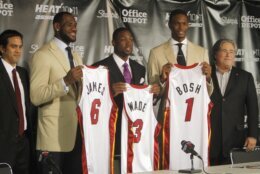 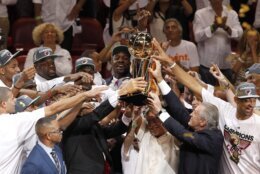 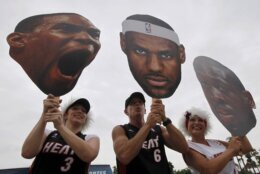 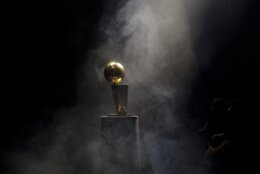 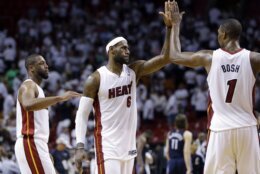 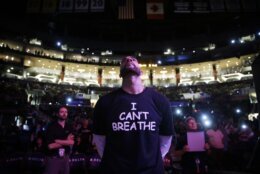 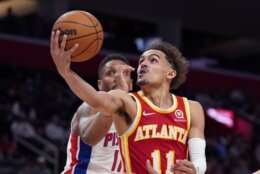 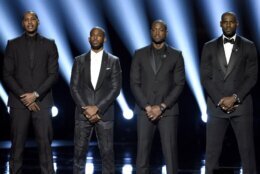 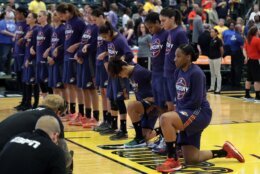 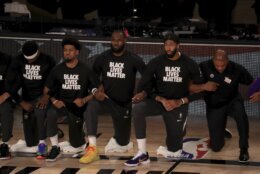 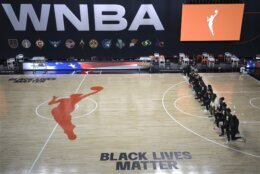 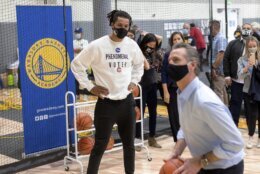 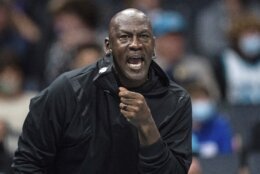 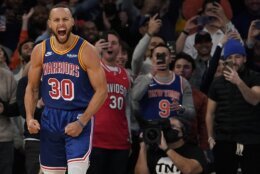 Two of the NBA’s most significant dynasties emerged in the second decade of the 2000s.

Then came the ascension of Steph Curry’s fling-it-up-from anywhere Golden State Warriors, who claimed three titles of their own and shredded all conventional wisdom on how far from the basket constituted a good shot.

There were also significant developments happening away from the court.

With James, Curry and others setting the tone, NBA players increasingly led a clarion call for social justice in the 2010s.

James and Wade posed in hoodies with their Miami teammates for a dramatic picture protesting the shooting death of Florida teenager Trayvon Martin.

Chris Paul and Jamal Crawford staged a silent protest that helped lead the NBA to issue a lifetime ban against Los Angeles Clippers owner Donald Sterling over racist comments that were caught on tape.

Players across the league donned “I Can’t Breathe” T-shirts — the last words of Eric Garner before his death after being placed in a chokehold by a New York City police officer.

The players of the WNBA also stepped up their activism, from wearing shirts that proclaimed “Black Lives Matter” to kneeling during the national anthem to show solidarity with Colin Kaepernick’s NFL campaign against police violence. They even campaigned against one of their owners in a U.S. Senate election.

“I will not just shut up and dribble,” James said, in what could very well be the mantra of the decade. “I mean too much to so many kids that feel like they don’t have a way out and they need someone to help lead them out of the situation they’re in.”

A decade of social activism merged seamlessly into America’s racial reckoning in the summer of 2020, which again found the NBA in the middle of things.

That shouldn’t have been a surprise, given the NBA has generally scored better than North America’s other men’s sports leagues on racial and gender equity issues.

Richard Lapchick, who issues an annual report card through The Institute for Diversity and Ethics in Sport at the University of Central Florida, credits long-time NBA Commissioner David Stern with establishing the culture that led to a decade of activism.

Outside of Pete Rozelle, who oversaw the rise of the NFL, Stern is perhaps the most influential leader in the history of U.S. sports. He guided the NBA for three decades before giving way to Adam Silver in 2014.

Stern died on New Year’s Day 2020 — one day after the end of a decade that might be his most lasting legacy.

“When he took over the league, a lot of critics and people were negative about the NBA. They said it was ‘too Black,’” Lapchick recalled. “But he said, ‘Let’s put the best players on the court and hire the best people to run the organizations.'”

Lapchick said a conversation he had with Stern in the late 1990s was especially profound.

Of course, it’s the players who make the game.

James stood above them all in the 2010s. It didn’t even matter if he had a ball in his hands.

The King was increasingly willing to speak out on divisive issues, and he dipped generously into his ample financial resources to support real change in everything from education to voter registration.

He has inspired countless young players to follow his example.

“He’s just used his platform the best of anybody,” Atlanta Hawks star Trae Young said. ”Certainly any basketball player, maybe any athlete, just because he knows the outreach he has and he uses it to his advantage.”

In a way, James was simply mimicking icons such as Bill Russell and Kareem Abdul-Jabbar, who were outspoken advocates for civil rights through the 1960s and ’70s.

Their influence faded with the ’80s rise of Michael Jordan, who was famously quoted as saying “Republicans buy sneakers, too” — a clear nod to commercialism over activism.

In a compelling twist, Jordan is now the NBA’s sole principal Black owner with the Charlotte Hornets and much more vocal on issues he once shied away from. But he missed a huge opportunity during his playing days.

“His dad was murdered,” Lapchick pointed out. “He could have been talking about gun control. But he chose not to.”

Jordan’s successors turned their energy in a different direction, even when it put them at odds with the highest office in the land.

Former President Donald Trump spoke derisively of athlete activists such as Kaepernick and declined to invite Curry and the Warriors to White House in 2017 after they won the second of their three NBA titles over a five-year run of finals appearances.

While James’ enormous skills made him Jordan’s logical successor on the court, he took a decidedly different tack when it came to politically charged matters.

In almost every way, James is the anti-MJ. It’s impossible to overstate the impact James had on the players around him, teammates and foes alike, and their transformation into a powerful, unified voice for change.

“I would never shut up about things that are wrong,” James said. “There’s no way I would ever just stick to sports, because I understand how powerful this platform is and my voice is.”

Following his lead, other players are capitalizing on their power.

Young, who is only 23, helped eliminate some $1 million in medical debt for struggling Atlanta families. He also signed on to a campaign to halt the execution of Oklahoma death row inmate Julius Jones, whose sentence was commuted by the governor.

“Knowing the platform I have and the outreach I have, if I do certain things it’s going to reach other people and maybe inspire someone else to do something positive, too,” Young said.

Looking back on the past decade, Lapchick believes one of the defining moments came at the start of the 2016 ESPY awards.

Normally a night for light-hearted frivolity, the ceremony began with a sobering charge from four of the NBA’s biggest names: James, Paul, Wade and Carmelo Anthony.

“We cannot ignore the realities of the current state of America,” Anthony said from the stage that night. “The system is broken. The problems are not new. The violence is not new. And the racial divide definitely is not new. But the urgency to create change is at an all-time high.”

Paul pointed to those pioneers who came before them. It was time, he said powerfully, for today’s athletes to worry about more than their scoring average.

“Generations ago, legends like Jesse Owens, Jackie Robinson, Muhammad Ali, John Carlos and Tommie Smith, Kareem Abdul-Jabbar, Jim Brown, Billie Jean King, Arthur Ashe and countless others, they set a model for what athletes should stand for,” Paul said. “So we choose to follow in their footsteps.”

Their words came less than six weeks after Ali’s death. In retrospect, Lapchick says, that was not coincidental.

“I think athletes knew something about Ali, knew that he was somebody who spoke out but maybe weren’t sure about what,” he said. “Then, with all the news stories after his death, pointing out all he did for so many decades and how he went from arguably the most unpopular person in the 1960s to one of the most popular and admired people at time of his death, that made athletes rethink what they should become.”

As the decade ended and the world was struck by a new scourge — the COVID-19 pandemic — the players of the NBA and WNBA only grew louder.

The deaths of George Floyd, Breonna Taylor and Ahmaud Arbery led to massive protests not seen since the 1960s, a cause that both leagues embraced while completing their seasons in a bubble to cope with the deadly virus.

Not even the closed-off world at Disney could stifle the NBA’s rank-and-file.

When Jacob Blake, a Black man, was shot by police in Kenosha, Wisconsin, a Milwaukee Bucks-led protest prompted players to walk off the court in the middle of the playoffs — a movement that sparked similar protests in other sports and received widespread support from the NBA’s largely white coaches and owners.

The players have vowed to turn symbolic gestures of the past decade into real change in the years to come, tackling crucial issues such as voting rights in response to many states changing access to the election booth.

NBA arenas were transformed into massive voting precincts during the 2020 election, allowing citizens to cast their ballots in person while maintaining social distancing guidelines amid a raging pandemic that has killed millions around the globe.

If the players have their way, that’s only the start.

There’s so many things on their to-do list for the next decade.

“We need to back the words up with action,” Young said. “I hope the world feels the same way.”

Curry, Warriors rally past Mavs for 2-0 lead in West finals