NEW ORLEANS (AP) — Dejounte Murray could feel his annoyance building as San Antonio coaches repeatedly went back over video of the Spurs’ blowout loss to New Orleans in the previous meeting between the two Western Conference play-in hopefuls.

Murray had 15 points, 13 assists and 11 rebounds, Keldon Johnson punctuated his 21-point night with a breakaway dunk in the final seconds and the Spurs bolstered their postseason hopes with a 107-103 victory over the Pelicans on Saturday night.

“Our two meetings today, I kind of was mad that we kept watching the film of that last game because they beat us really bad from tip all the way to the end of the game,” Murray said. “We all took that personal.”

The Pelicans nearly wiped out a 10-point deficit in the final 3:43 and had the ball, down 105-103, in the final seconds. But the Spurs sent multiple perimeter defenders at CJ McCollum, who opted to pass to Jose Alvarado on the left wing. Alvarado, an undrafted rookie who scored a career-high 23 points, missed his final shot for the lead from the 3-point line.

Jock Landale rebounded and got to the ball to Murray, who found Johnson with a long cross-court pass for the put-away basket in a victory that pulled San Antonio (30-44) one game behind New Orleans (31-43) for the final Western Conference play-in spot.

Pelicans first-year coach Willie Green said that although Alvarado had “a good look” at his last shot, the coaching in that situation could have been better.

Green also sensed the Spurs were playing with the emotion and purpose of a team seeking redemption.

“They remembered what happened the last time we played them and you could see they came out with a different force,” Green said, calling the Spurs’ 16 offensive rebounds and 22 second-chance points “the biggest factor” in the game.

“Normally teams don’t rebound the ball like that against us,” Green added. “It sort of negates what we do well.”

Josh Richardson scored 18 points for the Spurs, who trailed 92-90 with less than nine minutes to play before stringing together a pivotal 12-0 run during which Landale scored eight on a pair of 3s and a layup set up by Zach Collins’ shot fake and pass from underneath the basket.

“We kind of all understood what this game meant to our record and the chase with those guys,” Landale said. “There was a different level of intensity in the locker room and walking out on the court. … It was just good to see it all come together down the stretch.”

McCollum scored 32 and Jonas Valanciunas had 18 points and 11 rebounds for New Orleans, which led most of the first half. The Pelicans were up by as many as 12 when Larry Nance Jr., in his second game back from arthroscopic surgery on his right knee, tipped in Devonte’ Graham’s missed 3 early in the second quarter to make it 34-22.

The Spurs controlled the rest of the quarter, however, thanks in large part to Richardson, who scored 11 of his points in a four-minute span in the middle of the period.

Richardson’s three free throws after he was fouled on a 3-point attempt gave the Spurs a 50-46 lead with 4:30 left in the half.

New Orleans rallied to briefly take the lead when Herb Jones’ forceful, fast-break two-handed jam and Alvarado’s 3 made it 57-54. But Tre Jones’ driving layup and Johnson’s tip-in in the final seconds gave the Spurs a 58-57 halftime lead.

Spurs: Jakob Poeltl and Jakob Primo each scored 12 points, while Landale and Collins each scored 10. … Poeltl grabbed 11 rebounds. … Made 22 of 25 free throws. … Outrebounded New Orleans 49-42. … Small forward Devin Vassell, who averages 11.9 points per game, was held out with a sore right Achilles tendon.

Pelicans: Brandon Ingram, who leads the Pelicans with 22.8 points per game, missed his 10th straight game with a sore hamstring after being listed as questionable coming in. … Missed six of 19 free throws and missed 22 of 32 3-point shots. … Pelicans forward Naji Marshall was called for a flagrant foul when his hand caught Collins in the face early in the fourth quarter.

Pelicans: Host the Los Angeles Lakers on Sunday night in the last of three straight at home. 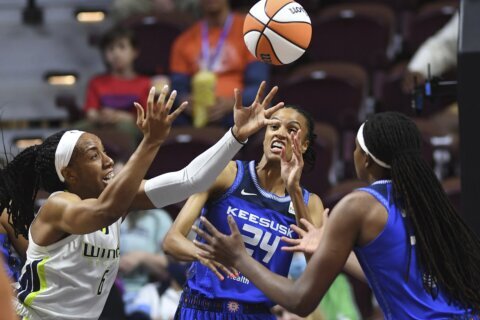 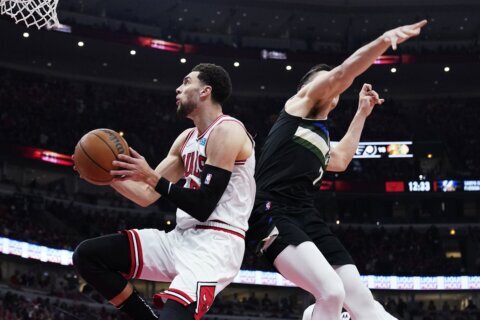 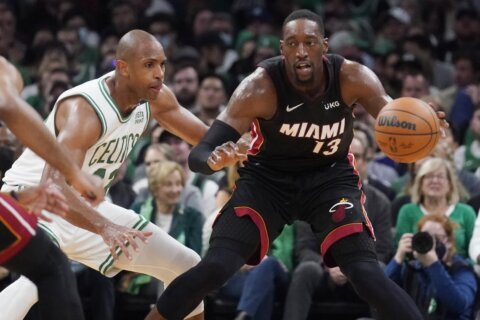