LOS ANGELES (AP) — Joel Embiid had 30 points and 10 rebounds, James Harden added 24 points and the Philadelphia 76ers hung on for a 126-121 victory over the Los Angeles Lakers without LeBron James on Wednesday night.

Two nights after the Sixers surprisingly beat Eastern Conference-leading Miami despite playing without Embiid and Harden, both stars returned for a tougher-than-expected win over the up-and-down Lakers. Tyrese Maxey scored 21 points for Philadelphia, which has won five of seven overall.

“Guys played well,” Harden said. “Obviously, we wanted to play a lot better, especially defensively. But we’ll take the win, and we’ve just got to continue to get better in these last games before the playoffs.”

James sat out to rest his sore knees, scuttling the potential showdown between the NBA’s leading scorer and Embiid, who was a fraction of a point behind him.

Philadelphia coach Doc Rivers saw his team’s second-half play behind its stars as an encouraging sign for the process of building teamwork between Embiid and newcomer Harden before the playoffs.

“Big picture, it’s going great, because they want to do it,” Rivers said. “As far as doing it well, they’re up and down. If you’ve got two guys that want to get it right, they’ll get it right. It’s difficult because it’s being done with 22 games left.”

Dwight Howard scored a season-high 24 points and Malik Monk had 23 for Los Angeles in a spirited effort from the supporting cast, but the Lakers lost for the 11th time in 15 games to fall 11 games below .500 again (31-42).

“Our goal is championships, and it’s still there,” said Stanley Johnson, who scored 13 points. “We’re trying to put the work toward things so when we get to the play-in game and the playoffs that we’re ready, playing our best basketball. There’s no win tonight for us at all, but the effort is something that we can continue, and we can use that later.”

The ninth-place Lakers are still in the expanded playoff picture, but they are now guaranteed to finish with their seventh losing record in nine years. That’s the same number of losing seasons they had in the previous 53 years, starting after they moved from Minneapolis to Los Angeles in 1960.

“We’re making progress,” Lakers coach Frank Vogel said. “We’re building habits that are going to win for us in the postseason, and we’re continuing to grow. We’re disappointed we lost, but without Bron, without AD, the group that played showed everyone we’ve still got a whole lot of fight left in us.”

Philadelphia led by 14 in the second half, but the Lakers got within 93-91 heading to the fourth quarter. Los Angeles focused its defense on Embiid, but Maxey and Tobias Harris hit big shots down the stretch as Philly hung on.

Russell Westbrook finished with 24 points, and he got a steal and a layup with 32 seconds left to trim Philadelphia’s lead to four points before the Sixers hit their free throws to ice it. Harris scored nine of his 20 points in the fourth quarter.

76ers: DeAndre Jordan had nine points and seven rebounds in his return to face the Lakers, who waived the veteran center three weeks ago after he struggled mightily in LA. … Philly’s road trip continues against the Clippers and finishes in a showdown with the NBA-leading Phoenix Suns on Sunday.

Lakers: Talen Horton-Tucker sat out for the third time in four games with a sprained left ankle. … In James’ absence, Johnson became a part of the Lakers’ 35th starting lineup of the season, the franchise’s most since the 2013-14 season. … Super Bowl MVP Cooper Kupp watched the game at courtside with his wife, Anna. Kupp is the latest Rams star to catch the Lakers since their championship season ended — but unlike Aaron Donald and Matthew Stafford, the Lakers didn’t win for Kupp. … Westbrook passed Lakers great Elgin Baylor for 32nd place on the NBA’s career scoring list.

James had played in the Lakers’ last eight games despite the persistent soreness in his knee, averaging 33.1 points, 8.9 rebounds and 7.0 assists during that stretch while trying to carry Los Angeles into the playoffs. James also became the second-leading scorer in NBA history during that span.

And while Vogel said James didn’t sit out strategically, the decision gives him five consecutive days off before Sunday, when the ninth-place Lakers visit the 10th-place New Orleans Pelicans in an improbably massive game for the Lakers’ playoff hopes.

James was honored with a tribute video after the first quarter for passing Karl Malone on the NBA’s career scoring list. James, who watched from the bench in street clothes, acknowledged the ovation with a wave.

76ers: At Clippers on Friday.

Lakers: At Pelicans on Sunday. 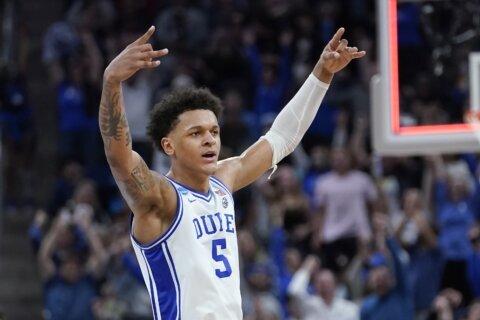 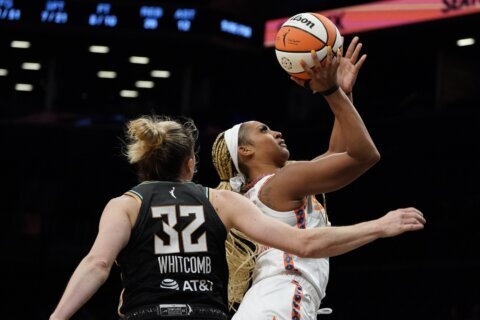