SAN FRANCISCO (AP) — Julius Randle scored 28 points and matched his season high of 16 rebounds, and the New York Knicks earned their first win in four tries during their West Coast trip, holding off the Golden State Warriors 116-114 on Thursday night.

Stephen Curry scored 19 of his 35 points in the first half and dished out 10 assists in Golden State’s second straight loss, just the third time all season the Warriors have dropped consecutive contests.

Golden State got one last chance with 6.2 seconds left and Klay Thompson dribbled into the paint and missed a jumper at the buzzer.

“Oh yeah, did you like it?” Thompson said, when asked if he liked the look he got. “It was a great look. Unfortunately it was long.”

Jonathan Kuminga converted a pair of free throws with 1:07 remaining that got Golden State within 112-110 and the defense drew a traveling turnover on Alec Burks moments later. But Curry missed a potential tying layup and Randle scored on Kuminga’s goaltend.

“Steph had a chance to tie it. I couldn’t believe that shot didn’t go in, it just hung on the rim for a few seconds,” coach Steve Kerr said. “Again, the fact that our guys clawed back to give themselves an opportunity was impressive.”

Evan Fournier connected on a key 3-pointer with 4:14 to play and finished with 22 points, while Burks’ 3 with 10:01 to go put the Knicks ahead 97-84 before Golden State nearly rallied.

Andrew Wiggins made a 3 with 5:04 to play, pulling Golden State within 104-100. Then Jordan Poole delivered the next time down.

Curry, who passed Ray Allen to become the career 3-point leader in December at New York, shot 5 for 16 from deep and 11 of 25 overall.

Thompson finished with 17 points, seven rebounds and five assists after having his minutes limit increased slightly to 30 — and that’s where he wound up.

The Warriors lost a third straight at home to the Knicks, whose 132-115 loss at Denver on Tuesday night put New York at 0-3 this road trip. They snapped a six-game skid away from Madison Square Garden.

“It’s important because of where we are,” Knicks coach Tom Thibodeau said. “I thought we played really well today. Each day we’ve just got to put everything we have into it. We can’t look too far ahead.”

New York received some welcome reinforcements: Center Mitchell Robinson returned after missing Tuesday’s game with a back injury and guard Quentin Grimes was back from a knee issue.

Kuminga scored 17 and Wiggins 15 for Golden State in the second game of a road-home back-to-back after a 111-85 defeat at Utah on Wednesday night that snapped a nine-game winning streak.

Kerr challenged his team to set the tone after he was disappointed with the “lack of pace and urgency” by the offense against the Jazz. Kerr received a technical foul with 3:19 to play.

“Draymond is probably the most unique player in the league.” — Thibodeau said of Draymond Green, still sidelined by a disc injury in his back.

Green continued with strength and balance work for his tender calf that was caused by the low back issue.

Knicks: Robinson had 11 rebounds and Burks finished with 15 points, six rebounds and five assists off the bench. … F Nerlens Noel sat out his second straight game with a sore left foot. … New York is 5-4 on the road vs. the Western Conference.

Warriors: The Warriors had just one turnover at halftime — and Golden State had 18 points in the paint, 11 second-chance points and 23 from the bench for a 62-57 lead on the Knicks at the break. … F Otto Porter Jr. sat out the second game of the back-to-back to manage a left foot injury. … As the Warriors honored late Hall of Famer Wilt Chamberlain during their 75-year celebration, Kerr recalled watching the great play beach volleyball in Pacific Palisades as a boy. “It was quite a scene,” Kerr shared. “You can imagine he was a pretty good middle blocker.”

Knicks: At Portland on Saturday to conclude the West Coast trek.

Warriors: Host LeBron James and the Lakers on Saturday night having lost the last three and four of five to LA at home. 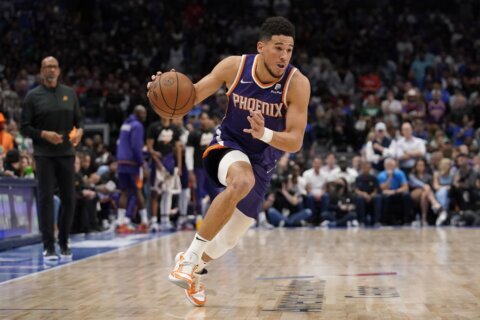 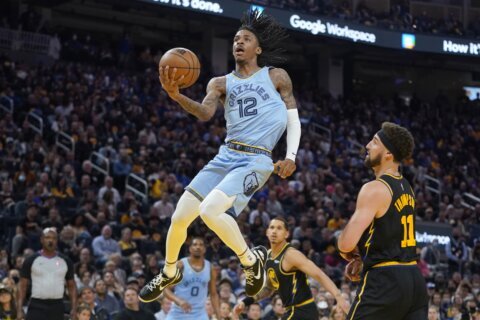