TORONTO (AP) — Justin Holl and Ilya Mikheyev scored on the same first-period penalty kill for their first goals of the season and the Toronto Maple Leafs routed the Ottawa Senators 6-0 on Saturday night at fan-less Scotiabank Arena.

The Maple Leafs and Senators returned to action for the first time since the NHL’s expanded schedule pause over the holidays.

The game was played without fans after the Ontario government capped attendance at indoor events, including arenas, at 1,000 spectators or 50% of capacity, whichever is smaller, because of COVID-19. Maple Leaf Sports & Entertainment, which also owns the NBA’s Raptors, subsequently said it would operate without sold tickets for games, save for league and team requirements, for the next three weeks.

“It’s an adjustment again, for sure,” Maple Leafs coach Sheldon Keefe said. “We’ve been through it, so I don’t think it’s as much of an adjustment for the group, but we missed the fans out here. As much as I was happy with our players’ engagement in the game, I don’t think game itself had a whole lot of emotion or energy or competitiveness, physicality — all those things and that tend to ramp up when the fans are in the building.”

Jack Campbell made 23 saves for Toronto for his fourth shutout of the season and eighth overall.

“We absolutely love our fans,” Campbell said. “(But) we got to play some hockey … everybody was super pumped. It showed.”

Mikheyev added another goal in the the third period, William Nylander also scored twice, and T.J. Brodie had a goal and two assists. Alexander Kerfoot had three assists.

“It was an impressive game by the boys in front of me,” Campbell said. “They were playing super fast and just doing everything coach talked about. Fun time out there and great to be back.”

Maple Leafs captain John Tavares played in his 900th regular-season game, and 231st with Toronto since signing in unrestricted free agency in July 2018.

“I didn’t think we were sharp, obviously,” Ottawa coach D.J. Smith said. “We didn’t create a whole lot. “They took it to us.”

Senators: At Seattle on Thursday night. 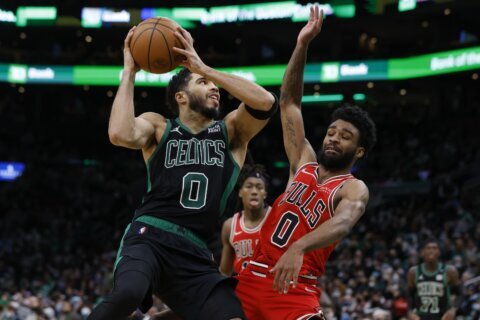