PHILADELPHIA (AP) — Gabe Vincent hit a key 3-pointer in the fourth quarter and scored 26 points, Duncan Robinson had 21 points, and the short-handed Miami Heat built a 23-point lead and held on to beat the Philadelphia 76ers 101-96 on Wednesday night.

Kyle Lowry added 14 points for the Heat, who had only 10 available players — seven of whom were undrafted. Miami shot 40.9% from long distance, hitting 18 3-pointers.

“Everybody is putting their hearts and souls into this,” Miami coach Erik Spoelstra said. “I really appreciate this team and what they put into the process. We knew guys were going to have to step up, and we had that tonight.”

Joel Embiid had 17 points and 14 rebounds in his return from right rib soreness after missing Monday’s 126-91 loss at Memphis. Tyrese Maxey led the 76ers with 27 points, and Tobias Harris added 24.

Both teams — especially the Heat — were ravaged by injury, illness and protocols. Philadelphia’s Georges Niang and Miami’s Caleb Martin sat out because of the NBA’s COVID-19 health and safety protocols. Martin missed his third straight game.

But the lineup the Heat fielded took control in the first half. Miami led by as many as 19 points in the opening 24 minutes and held a 58-49 lead at halftime.

“We couldn’t get stops,” 76ers coach Doc Rivers said of the first half. “I thought we were bad offensively and defensively.”

The 76ers, behind the strong play of Maxey, started chipping away at the lead. The Sixers finally tied it on a 3-pointer by Harris that made it 96-all with 1:24 remaining. Then, Danny Green stripped Lowry in the backcourt, but Harris was called for a charge. After Lowry misfired on a 3-point try, Vincent grabbed the long rebound and drained a 3 to put the Heat ahead 99-96 with 39.4 seconds left.

“We had the tip-out, I had a look a the rim for a brief second and I tried not to hesitate,” said Vincent, who shot 7 for 12 from long range. “I’m just trying to win a game. I knew we needed a bucket.”

After each team failed to convert, Embiid missed a 3-point try that would’ve tied it before Lowry closed it with a pair of free throws.

“It’s a resilient win,” said Robinson, who had four 3-pointers.

Niang became the fifth member of the 76ers to miss time this season due to the protocols, which sidelined Embiid for nine games earlier this season. Niang is part of an increasingly high list of players in the NBA, and sports in general of late, to have to miss time due to protocols.

The Chicago Bulls were forced to postpone two games this week, and the NFL’s COVID-19 list grows daily as cases continue to spike.

“Yeah, I’m worried,” Rivers said. “You see football and hockey and us. It’s just a lot of it right now. It clearly is a concern, for sure.”

The Philadelphia coach is concerned that if the trend continues, there may be a reversion to the strict protocols from last season when many games were played without fans, or with limited fans in attendance. Already, the Toronto Raptors have announced 50% capacity for fans beginning on Saturday. The city of Philadelphia said earlier this week that any fans attending 76ers games would need to show proof of vaccination starting on Jan. 3.

Heat: In addition to Herro (right quad contusion), the Heat continued to be without Butler (back), who has missed four in a row; Markieff Morris (neck), out since Nov. 8; Adebayo (right thumb), sidelined for eight straight; and Victor Oladipo (right knee recovery), who hasn’t played yet this season. Oladipo is traveling with the team, but there is no timetable for his return.

76ers: G Furkan Korkmaz (non-COVID illness) didn’t play, and Ben Simmons (personal reasons) continues to sit out. … Embiid said he rolled his ankle near the end of the contest.

Heat: Miami started Robinson, P.J. Tucker, Dewayne Dedmon, Vincent, and Lowry. … Improved to 9-8 on the road. … Play the third contest of a four-game trip on Friday in Orlando. … Tucker had 12 points and Dedmon scored 10.

76ers: Recalled Paul Reed and Aaron Henry from Delaware of the G League. … Seth Curry wore a hat before the game embroidered with “2,974 & Counting” in honor of his brother Steph’s NBA record for 3-pointers made.

Heat: At Orlando on Friday night.

76ers: At Brooklyn on Thursday night. 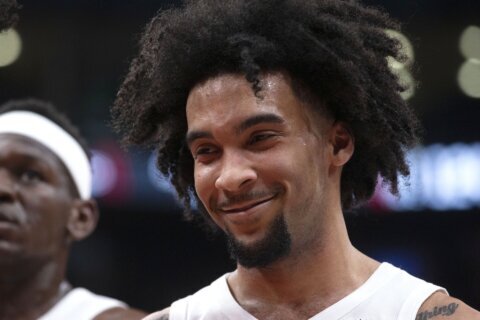 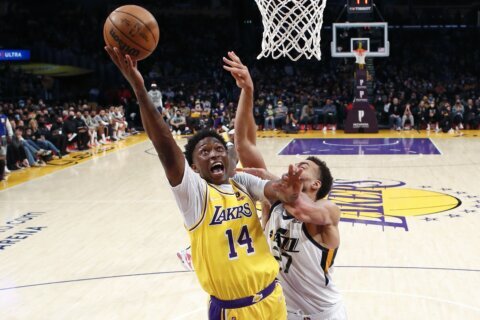