BOSTON (AP) — Jayson Tatum had made just one of his first six shots against Philadelphia when Celtics coach Ime Udoka came to him with a sort of a pep talk.

“I told him it would be nice to make a shot,” Udoka said. “He looked up at me and said: ‘I’ve got nine rebounds.’”

Tatum scored 26 points with a career-high 16 rebounds on Wednesday night, shaking off a slow start and a hard fourth-quarter fall to lead Boston to an 88-87 victory over the 76ers.

Tatum scored 11 points in the fourth, and Robert Williams III blocked Georges Niang’s shot at the buzzer to give the Celtics a victory in their first game this season against their longtime Eastern Conference rivals and former coach Doc Rivers.

It was Boston’s lowest scoring total for a win in almost four years.

“I’m not really going to apologize for an ugly win,” Udoka said. “It happens.”

Al Horford, who left Boston to sign with the Sixers in 2019 and had the worst season of his career, had 10 points, eight rebounds and five blocked shots. Getting shipped out from Philadelphia to Oklahoma City the following year was “a very low point for me,” he said.

“I was written off. I’m just glad I got another opportunity in a place I want to be,” he said. “There’s a lot of satisfaction being back here and playing at a high level.”

“We challenged him to take pride in that matchup. He’s a guy he knows well, playing with him, playing against him,” Udoka said. “Al did have some excitement. … He’s a prideful guy. One stop, one blip on the radar doesn’t define his entire career and I think he’s shown who he really is.”

Embiid had 18 rebounds and 13 points. Seth Curry scored 17 points and Shake Milton came off the bench to add 16.

Boston took an 88-84 lead with 38 seconds left when Dennis Schröder drove to the basket. Danny Green answered with a 31-footer from the top of the key to cut the lead to one point.

Schröder again drove, but this time missed everything, and the Sixers got the rebound and called timeout with 6.1 seconds to play. The ball came in to Tobias Harris, who found Niang in the left corner.

But Williams — who missed the previous three games with a non-COVID illness — got a piece of the shot and it fell far short of the rim.

Tatum was raked across the shoulder by Matisse Tybulle going to the basket with 4:18 left — a common foul — but one that sent the Celtics star slamming to the floor on his arm. After less than a minute, he was up and ready to shoot the free throws, waving off the training staff.

Enes Kanter Freedom played his first game since becoming a U.S. citizen and adding a new surname to celebrate. The Celtics center received a cheer when he checked in in the first quarter and was introduced as “Enes Freedom.”

His jersey also bore his new last name, and he was identified that way in the lineup and box score. A native of Turkey, Freedom has been outspoken in his opposition to Turkish President Recep Tayyip Erdoğan and other governments he deems oppressive.

There was a problem that required the net on the basket at the Celtics’ end of the court to be replaced at halftime. The start of the third quarter was delayed approximately five minutes. The net was replaced again with 2:22 left in the third, causing another delay.

A Celtics spokesman said the problem was “a recurring problem with the net attachment” but no more information was immediately available.

Josh Richardson went to the locker room in the third quarter with a towel over his left eye. He returned early in the fourth with a bandage over the eye after receiving four stitches. … Brown went to the locker room early in the fourth and returned a few minutes later. … The Celtics improved to 5-37 in the past nine seasons when scoring 88 or fewer points.

Sixers: At Atlanta on Friday. 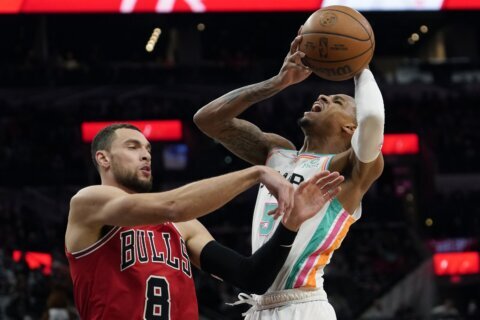 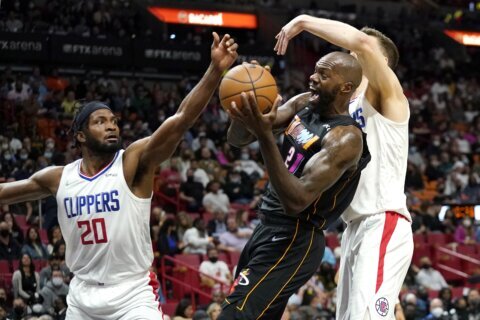