SALT LAKE CITY (AP) — Donovan Mitchell had a big third quarter and then turned to Mike Conley. He didn’t need to say a thing.

“Don and I kind of have a nonverbal communication. He looks up at me with his hands on his knees and I’m like, ‘I’ll take the ball for a few possessions,‘” Conley said.

Mitchell scored a season-high 36 points and Mike Conley add a season-best 30 points, lifting the Utah Jazz to a 119-113 win over the Sacramento Kings on Tuesday night.

“To be able to play off each other and be in close games like this one where shots may stop falling but fortunately I’ve got a 15-year veteran there and can say, “You got it and I’ll stay out of the way,” Mitchell said of his backcourt mate.

Conley scored 13, including three 3s, in the fourth quarter, and Rudy Gobert made six clutch free throws down the stretch to move Utah to 7-1 on the season.

“It was one of those games where me and Don had it going and the rest of the team was missing shots they usually make, so in those moments you go with what’s working,” Conley said.

This win wasn’t easy for Utah. The Kings kept hanging around and cut the lead to 115-113 on Harrison Barnes’s 3-pointer with 23 seconds remaining.

Mitchell made two free throws while Buddy Hield jawed with him. Gobert forced Barnes into a tough shot on a drive and then blocked Davion Mitchell’s shot on the next possession to seal the win, Utah’s sixth straight over the Kings.

The game was tight throughout with neither team leading by more than single digits. Sacramento (3-3) took its final lead of the game on Richaun Holmes’s tip-in with 5:02 remaining to make it 102-101.

Barnes led the Kings with 23 points and Hield had 19. Seven Sacramento players scored in double figures.

The Jazz have been struggling from the 3-point arc and went 4 of 25 in first half, missing 10 in a row at one point. But the Jazz used the long ball to gain advantage in the second half, especially behind Mitchell and Conley. The pair combined to go 11 for 21 from beyond the arc.

Mitchell scored 17 points in the third quarter, but it wasn’t enough to shake Sacramento, which trailed 90-87 entering the final period.

“He was hot tonight. He hit shots. He hit tough shots. You can’t really do anything about that,” Davion Mitchell said.

However, Utah’s Mitchell had one play that deflated Kings’ spirit. Mitchell missed a 3-pointer, ran to grab the rebound and then made a layup as the Kings stood and watched. Sacramento coach Luke Walton was visibly upset and called a quick timeout.

“I love the fight of our team. It’s really fun coaching these guys. We’re learning these hard lessons. I hope we figure it out soon, but the details of the game is what’s costing us right now. Tonight, it was defensive rebounding,” Walton said of Utah’s 15 offensive rebounds.

Fox was shooting just 37.7% overall and 17.1% from 3-point range and struggled again versus Utah. He had eight fourth-quarter points to keep the Kings close. The Sacramento point guard is now 9 of 34 in two games against the Jazz.

“He’s fine. Yeah, he’s missing some shots, but that’s part of it. We all go through these little slumps. It happens to everybody. I think it’s being made a bigger deal than it is,” Tyrese Haliburton said of Fox.

WHAT CAN’T CONLEY DO?

When asked if he gets surprised about what Conley is showing as a 34-year-old point guard, Utah coach Quin Snyder said, “I think he’d be a great quarterback. I think he’d probably be a heck of a tennis player. I’m sure he’s a good bowler. You go down the line. We all know he can golf. I bet he can pick any position on the baseball field.”

As far as basketball, Hassan Whiteside added, “If you’re a casual basketball fan, you might not know who Mike is, but people who really know basketball believe he’s one of the most underrated players of all time.”

Kings: Holmes limped off the court with an apparent left knee injury with 8:04 left in the second quarter but returned a few minutes later. … Sacramento reserves outscored Utah’s bench 41-19. … Hield got two technical fouls with 0.4 seconds remaining in the game and was ejected.

Jazz: Utah’s first 20 points of the game were in the paint. … Jordan Clarkson, who saw his 99-game streak with at least one 3-pointer end last game, went 0 for 11 from deep and had two points. … With 3:10 left to play, the Jazz successfully challenged a foul on Gobert and then got the ball due to a “stolen tip” on the ensuing jump ball.

Kings: Host the New Orleans Pelicans on Wednesday, the start of a four-game homestand.

Jazz: Visit the Atlanta Hawks for the first of three straight road games. 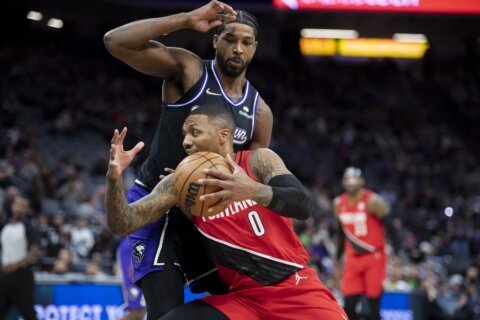 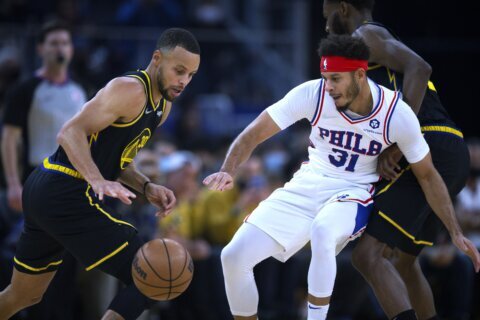