DENVER (AP) — Nikola Jokic blocked Jae’Sean Tate’s drive to the basket as time ran out and the short-handed Denver Nuggets escaped with a 95-94 victory over the Houston Rockets on Saturday.

Jokic finished with 28 points and 14 rebounds as the Nuggets won despite the absence of forward Michael Porter Jr.

Porter left the game with 4:50 remaining in the first quarter and didn’t return because of what the team called lower back soreness. Porter missed a fast-break layup early in the game and came up the court gingerly. He stayed in the game for more than four minutes before leaving.

Coach Michael Malone did not have an update on Porter following the game.

Aaron Gordon had nine points, including a pair of corner 3-pointers, his last one with 51 seconds left that gave Denver the lead.

The Nuggets had a chance to go up by three but P.J. Dozier missed a shot with 12.8 left. The Rockets raced down the court and Eric Gordon went into the lane and passed the ball to Tate, who drove baseline and went up for a possible winning basket but Jokic blocked it.

Jokic was mobbed on the court by his teammates after the block.

Tate finished with 10 points for Houston, which has lost seven straight.

After talking to reporters, Tate wrote on Twitter: “I take it back that was a good block.”

Jokic also had a block in the final seconds at Minnesota to preserve a win against the Timberwolves on Oct. 30.

Christian Wood had 12 points and 17 rebounds and Daniel Theis scored 18 points in his return to the lineup. Theis’ 3-pointer from the top of the circle had given the Rockets the 94-89 lead with 2:44 left.

“This one stings because we were up most of the game and we were up five with 2 1/2 minutes to go and they hit the two 3s,” coach Stephen Silas said.

The Rockets led by as many as eight in the first half and 47-46 at the break. The Nuggets went ahead on Will Barton’s dunk and stretched the lead to six midway through the third quarter. Despite 12 points and seven rebounds from Jokic in the third, Houston trailed just 72-71 heading into the fourth.

Denver led by seven early in the fourth but couldn’t put Houston away.

“There’s no easy game for us,” Jokic said.

Rockets: Silas said Danuel House Jr. could return to the lineup Sunday night against Golden State. He has missed the last five games with a right foot sprain. … Theis had missed two games with soreness in his right big toe.

Nuggets: Barton had 15 points, the only other Denver player in double figures. The Nuggets have won six straight home games against Houston and five straight overall.

Denver’s bench has struggled this season but one bright spot is the play of rookie guard Bones Hyland. Hyland, the 26th pick of the 2021 draft, has played his way into the rotation after sitting the first three games. He made an impression on Malone, who is willing to stick with him through growing pains.

Hyland was 1-for-7 shooting Saturday and had a couple of turnovers, including one when he dribbled the ball off of his leg and out of bounds.

“Bones is being afforded an opportunity to play and play some meaningful minutes,” Malone said. “The only way he’s going to learn and get better is to play through those mistakes. The minutes that he’s had not once have I said, ‘Wow, he’s completely out of his element.’” 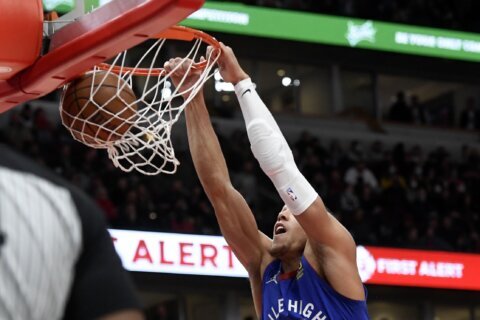 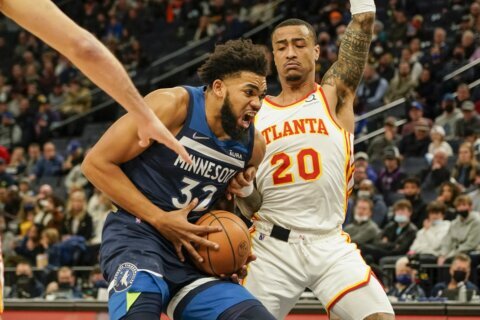 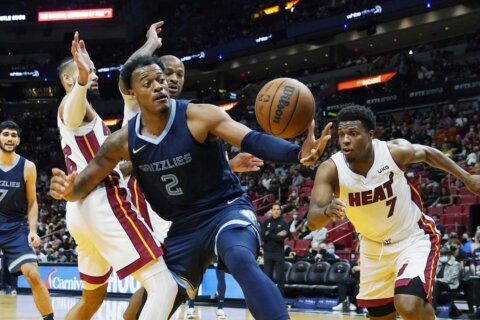