MIAMI (AP) — Udonis Haslem has been telling anyone who will listen the same thing for years, that if given…
Listen now to WTOP News WTOP.com | Alexa | Google Home | WTOP App | 103.5 FM

MIAMI (AP) — Udonis Haslem has been telling anyone who will listen the same thing for years, that if given a chance he can still impact winning.

In a 90-second span Wednesday night, Haslem committed a foul, got a rebound, scored on a layup, blocked a shot, picked up another foul and grabbed another rebound. That’s a hectic minute and a half for anyone in the NBA — and when considering that Haslem is 41, it looks even better.

The Heat outscored New Orleans by 12 points in Haslem’s 7-1/2 minutes of work, and his two stints off the bench were a major spark in Miami’s 113-98 win.

“We have a lot of guys that are ignitable and then UD gives you that emotional ignitability,” Heat coach Erik Spoelstra said. “And that’s tangible, but you can’t put an analytic to it. It gave us a great emotional spark. … I’ve seen that so many times, that emotional lift, but that’s ignitability as well.”

Haslem’s final line: two points, three rebounds, one assist, one block. He became the sixth-oldest player in NBA history to have at least one of all those in the same game, joining Kareem Abdul-Jabbar, Vince Carter, Robert Parish, Dikembe Mutumbo and Kevin Willis.

He played the last minute of the first half, then the final 6:21 of the third quarter and immediately made an impact by taking an offensive foul in what was then a one-point game. The Heat wouldn’t trail again.

“I preach ‘stay ready so you don’t have to get ready’ to these guys, and obviously, when I get an opportunity to go out there and play I can’t just talk about it — I’ve got to be about it,” Haslem said. “For me, I try to preach to my guys that I am who I really say I am and I want those guys to be who they say they are every night we step on the floor.”

Even players from other sports in Miami rave about what Haslem brings. Miami Marlins infielder Miguel Rojas was at the game Wednesday night, and left with a couple souvenirs — Haslem’s sneakers.

“Ever since I got here, UD’s always been able to run up and down and impact the game, whether it’s in practice or whatever it is,” Heat guard Tyler Herro said. “He makes people better.”

Haslem is in his 19th season, his stint Wednesday night was his longest in a game since August 2020, and he’s already made four appearances this season after making just one last year. Spoelstra said the Heat evaluated everything over the summer and one of the things he thought about was finding situations where he could use Haslem more.

“I don’t trust anybody more than UD,” Spoelstra said. 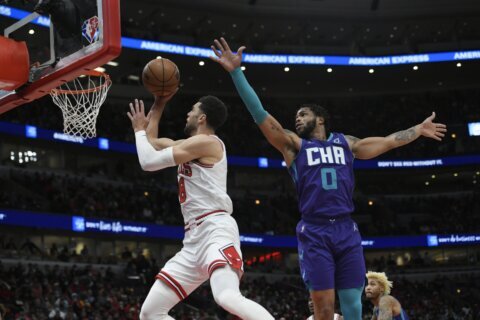 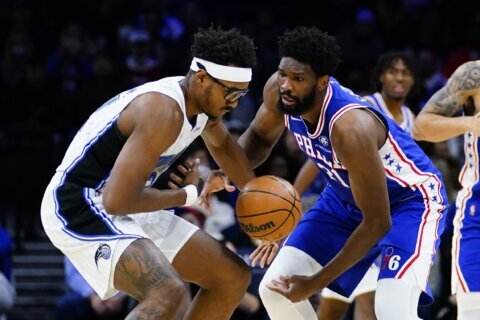 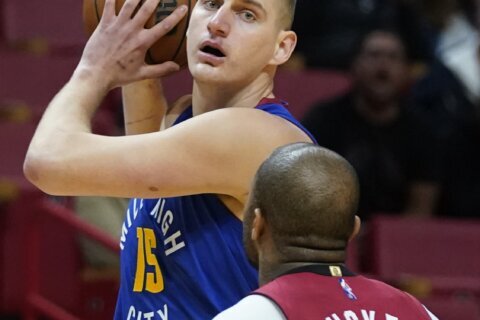