Tony Brown usually isn’t that excited about being assigned a shift as one of the referees working in the NBA’s…
Listen now to WTOP News WTOP.com | Alexa | Google Home | WTOP App | 103.5 FM

Tony Brown usually isn’t that excited about being assigned a shift as one of the referees working in the NBA’s replay center.

That is, until now.

The longtime NBA ref — diagnosed earlier this year with Stage 4 pancreatic cancer — is going back to work Monday for the first time in eight months. He’s been cleared to work in the replay center for two nights, after his family, his doctors and the league agreed that his treatment has gone well enough to allow for him to start a comeback.

“I haven’t had time to sit around and be like ‘Why me?’ or ‘What am I going to do?’” Brown said in an interview with The Associated Press. “Me not fighting would have made me feel like I was letting people down. What kind of example was I going to be to my kids if I just laid in this bed and let it overtake me? I had to show my kids that there’s nothing in life that you can’t challenge and overcome if you have a positive mindset.”

Brown’s fight is a long way from over. The American Cancer Society estimates 3% of patients with Stage 4 pancreatic cancer are alive five years after being diagnosed.

He’s undergone 14 rounds of chemotherapy — each involving seven hours of getting infused with three different drugs at a hospital, followed by two more days of treatment at home through a port in his chest. Brown still has two more rounds of chemo left, but doctors are encouraged by scans that show his tumors have been steadily shrinking.

His friends in the NBA referee community have checked in constantly. Rodney Mott, one of his closest allies, helped introduce Brown to certain shakes and supplements that Brown believes has helped him throughout the process. Even some current players have sent well-wishes.

“This is something you cannot face alone,” Brown said.

It all started with what was initially believed to just be food poisoning from a bad batch of sushi that he had during a work trip to Miami. That led to tests, which led to more tests, which finally led to the cancer diagnosis. Within a week, he was undergoing aggressive treatment and has been seeing highly regarded doctors from Emory University in Atlanta and the MD Anderson Cancer Center in Houston since.

Turns out, the food poisoning was a very lucky break.

“I hope it just sends a clear message: just go and get some type of early detection,” Brown said. “It’s worth it, because you just never know. And time is of the essence.”

Brown has officiated 1,109 regular-season games, two NBA All-Star games and made his NBA Finals debut in 2020. He was going to return to the replay center earlier this month, but the schedule couldn’t be worked out around his chemo regimen at that time.

Monty McCutchen, who oversees the NBA referees, told Brown that when he was ready, the league would be ready for him. Brown’s doctors then signed off, and that left Brown with just one more necessary clearance.

“I started talking to my family about it, and before I could even get the words out, they were like ‘Absolutely, you should do it,'” Brown said. “I thought about it for about a week, then I contacted Monty and said I was ready to contribute and do my part.”

Brown’s goal is to get back on the court this season, possibly not long after the All-Star break. He’s been immersed in the game during his absence, saying watching and studying has been a big part of his therapy.

He’s also been able to keep in shape, another obvious help.

“I haven’t just been fighting for just me,” Brown said. “I’ve felt like I’m fighting for everybody that has love and respect for me. And that’s just makes you fight even harder.” 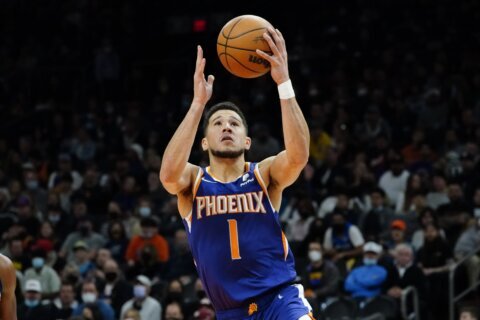