PHOENIX (AP) — Postseason or preseason, the Phoenix Suns keep getting the best of the Los Angeles Lakers.

The Western Conference champions got their first exhibition victory with a 117-105 victory Wednesday in a rare weekday matinee start.

The start time for the game in Phoenix was moved up so the Mercury could host their WNBA semifinal game on their home court late that night. The court was decorated with the Mercury’s logos.

Deandre Ayton had 14 points and 11 rebounds to help the Suns even their exhibition record at 1-1. Mikal Bridges scored 15 points and Jae Crowder had 13 points and nine rebounds.

Devin Booker rested for Phoenix. Chris Paul had eight points and 11 assists in his preseason debut and the Suns got a strong effort from their bench. Cam Johnson scored 13 points and newcomer JaVale McGee provided 12 points in 14 minutes. Cameron Payne had 11 points and five assists.

The Suns beat the Lakers in the first round of last season’s playoffs, winning three straight games after falling into a 2-1 deficit. LeBron James and Anthony Davis were battling injuries in that series and Los Angeles still wasn’t at full strength Wednesday.

James and Russell Westbrook sat out their second straight game, though Carmelo Anthony made his Lakers debut and scored eight points in 17 minutes. Davis had 14 points and eight rebounds in 25 minutes.

Malik Monk scored 18 points off the bench for the Lakers (0-2). Talen Horton-Tucker and Kendrick Nunn each added 11.

Trevor Ariza also sat out again and the Lakers announced after the game the veteran forward had an arthroscopic procedure on his right ankle and will be evaluated in about eight weeks.

Boban Marjanovic added 14 points, hitting a pair of 3-pointers later in the third quarter, and Jalen Brunson had 10 points and eight assists for the Mavericks.

Rookie Jared Butler scored 22 points for the Jazz, who rested Donovan Mitchell, Rudy Gobert and most of their regulars while falling to 0-2.

Curry made a 3-pointer to spark a 13-0 run over the final 2 minutes of the second quarter that was capped when Curry pump-faked as Denver’s PJ Dozier flew by, took a dribble and hit another 3 to give Golden State (2-0) a 63-62 halftime lead.

Michael Porter Jr. (knee) did not play for the Nuggets.

Murphy, the No. 17 pick in the draft, has made six 3s in both games for the Pelicans (1-1). Nickeil Alexander-Walker added five and finished with 19 points, while Jonas Valanciunas had 13 points and nine rebounds.

Kelly Olynyk and Cory Joseph each had 14 points and six assists, while Saddiq Bey scored 13 points for the Pistons.

Trey Lyles hit two of his three 3-pointers in a 14-2 run in the third quarter that gave Detroit (1-0) the lead for good. Lyles, who finished with nine points, played the past two seasons with San Antonio (1-1).

Bryn Forbes, who made 6 of 8 from the 3-point line and 7 of 11 from the field, led the Spurs with 20 points. Keldon Johnson added 18 points and Lonnie Walker IV scored 13.

Detroit’s top selections in the past two drafts, Cade Cunningham — the No. 1 overall pick in 2021 — and Killian Hayes did not play due to ankle injuries.

Trae Young (quad), Danilo Gallinari (rest) and Bogdan Bogdanovic (rest) did not play for the Hawks.

LOS ANGELES (AP) — De’Aaron Fox scored 23 points on 7-of-11 shooting and Terence Davis scored all his 15 points in the second half for Sacramento.

The teams were tied at 51-all at halftime, but Buddy Hield, who finished with 11 points, hit two 3-pointers in a 13-0 run in the third quarter that blew it open. 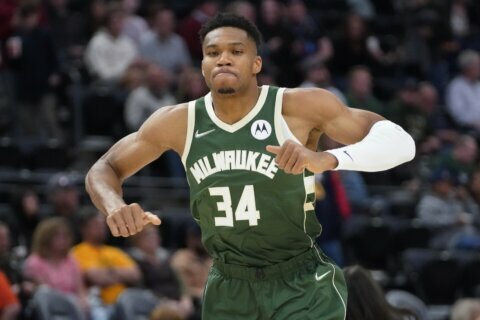