The Latest: Leonard tries to stay ‘relevant’ during rehab

The latest from NBA media day on Monday (All times EDT)

Kawhi Leonard is heading into his third season with the Los Angeles Clippers just trying to get healthy.

He’s two months into rehab after undergoing surgery to repair a partial tear of the ACL in his right knee on July 13.

Leonard describes his status as day-to-day with no estimated timetable for his return. He says it was “very challenging” being injured during the playoffs last season when he didn’t really even feel hurt.

Although Leonard won’t be on the court when the Clippers open the season next month, he plans to make his presence felt in other ways.

He’ll watch games and film with his teammates, sit in on coaches’ meetings and know the nightly game plan to make sure his teammates follow it.

Leonard says he’ll “try to make myself as relevant as possible” while being confined to the sideline.

New Dallas coach Jason Kidd is already thinking of ways to tell Luka Doncic he has help on the roster.

Kidd told reporters during his media day session that he looks at the 22-year-old Doncic as “a young Picasso.” Kidd adds he didn’t know “if anybody coached Picasso” but that he “used all the paints.” The championship-winning point guard with the Mavericks in 2011 says he wants to remind Doncic “that he can rely on his teammates.”

Doncic averaged 35.7 points, 10.3 assists and 7.9 rebounds in a seven-game loss to the Los Angeles Clippers in the first round of the NBA playoffs. Dallas hasn’t won a postseason series since Kidd and the Mavericks won the franchise’s first championship a decade ago.

When asked about the Picasso thing, Doncic said about trusting his teammates: “Not just that, I think there’s a lot I can improve on, off the court, on the court. Obviously this is one of them. I think he’s right.”

Kidd is replacing Rick Carlisle, the coach for the title team. Carlisle resigned a day after the Mavericks announced the departure of longtime president of basketball operations Donnie Nelson. Nico Harrison replaced Nelson.

As the Houston Rockets attempt to find a trade destination for John Wall, he’s focused on helping the team any way he can.

My job here is to be a mentor,” Wall said.

The veteran isn’t expected to play for the Rockets while they search for a trade for the guard. General manager Rafael Stone said they aren’t looking to buy out Wall’s contract but want to find a suitable trade.

“We’re looking at what can we find that works for everybody… for the long term,” Stone said.

Wall said it will be “very tough” not to play while the Rockets find him a new team, but he knows that this plan is what’s best for him.

Payton was a holdout until recently when it comes to getting the COVID-19 vaccination The seven-year veteran – who signed with Phoenix during the offseason – just received his second shot on Sunday.

“I definitely had to change my mind,” Payton said. “It wasn’t something I wanted to do.”

Payton didn’t say exactly what changed his mind, just that he made the decision after understanding “how the league was handling it.”

Adams says he didn’t go home to New Zealand this offseason due to protocols.

“There’s a two-week quarantine at a hotel, so logistically it didn’t make sense because I still needed to work out and (I) can’t be locked up that long.”

Adams called the NBA’s goal of getting to 100% without a mandate a “pretty good goal.” The newly acquired Grizzlies center is vaccinated and says he’s part of the majority.

Told the league has at least 90% of players vaccinated, Adams said, “Pretty low goal I guess.”

Grizzlies Ja Morant hasn’t paid any attention to the NBA’s push to get everyone vaccinated because he has been vaccinated for a while with plenty of motivation to take extra precautions.

“I know a lot of people who had COVID and passed away,” Morant said. “Me, I just wanted to protect myself. Me and my family got it. I have a baby girl. I travel a lot. So can’t bring COVID back to her.”

Nate McMillan has a familiar face on his coaching staff as he heads into his first full season as the Atlanta Hawks coach.

Jamelle McMillan joins the Hawks staff this season after serving previously as an assistant with the New Orleans Pelicans.

Asked if he’s worked with his 32-year-old son professionaly, Nate McMillan jokes, “No. Well, in the house, yeah.”

The elder McMillan took over the Hawks on an interim basis midway through last season and guided the team on a surprising run to the Eastern Conference final. He quickly reached agreement after the playoffs to take the job on a full-time basis, leading to some changes on the coaching staff.

Chris Jent returns as the lead assistant and will be joined by newcomers Jamelle McMillan, longtime NBA assistant Joe Prunty, and Nick Van Exel, who will work exclusively with the guards.

Nate McMillan says his son is “a young buck and can hustle. Myself and Gent and Prunty can’t move like we used to. We needed a young guy. I think he will do a great job helping develop our young players.”

NBA Rookie of the Year LaMelo Ball is pushing the NBA to allow him to switch his jersey number, but he’s not had any success.

The Hornets point guard missed the deadline last year to submit a number change request to the league that would allow him to switch from the No. 2 that he currently wears to the No. 1 that prefers. Malik Monk wore No. 1 last year for the Hornets.

Because of New York coronavirus regulations, all Nets players must be vaccinated in order to play in home games.

Irving says his status will be cleared up at the appropriate time.

Kevin Durant says he trusts in his friend and says he “expects us to have our whole team at some point.”

New Celtics coach Ime Udoka also had to participate in his team’s media day interviews via Zoom on Monday due to a breakthrough case of COVID-19.

New Orleans Pelicans basketball operations chief David Griffin says Zion Williamson is recovering from offseason surgery to repair a broken metatarsal in his right foot but could be available for the start of the regular season.

Griffin says the injury occurred on a basketball court while Williamson was working out on his own this summer.

The forward’s “rehab has been done totally in lockstep with the organization, and we’re happy with that,” Griffin says.

Williamson was not with the club during recent voluntary workouts in Nashville, Tennessee, where the Pelicans chose to temporarily relocate after Hurricane Ida. But he has joined the team in New Orleans.

Coach Willie Green says Williamson is working out primarily in swimming pools for the time being to minimize stress on his healing foot, but he should be back on the court during the preseason.

“The timeline is that we’re hopeful he can start the season,” Green said. “Until then, it’s just a progression with him and the medical team.”

As expected, Ben Simmons will not report to the Philadelphia 76ers when they open training camp on Tuesday.

Team President Daryl Morey said there’s still hope Simmons will return at some point to the Sixers. Coach Doc Rivers said no one has defended Simmons more than he has and will enter camp “with hopes that we do have Ben at some point.”

Simmons, the No. 1 pick of the 2016 draft and a three-time All-Star, requested a trade in the offseason. He took the brunt of the blame for the top-seeded Sixers’ second-round exit in last season’s playoffs. He shot 34% from the free-throw line in the postseason and was reluctant to attempt a shot from anywhere on the floor late in games. That led to him spending critical minutes on the bench.

Simmons has $147 million and four years left on his contract. Simmons could be suspended or fined each day he misses camp.

New Celtics coach Ime Udoka has a breakthrough case of COVID-19 and participated in the team’s media day on Monday through Zoom.

Celtics spokesman Christian Megliola said the coach, who is vaccinated, was asymptomatic and in the last day of his 10-day quarantine. Udoka is expected to be in person with the team when training camp starts on Tuesday, Megliola said.

Pacers coach Rick Carlisle says his new team has a “very high” vaccination rate but declined to give a specific number because of privacy concerns.

He did say Monday that all members of the coaching staff are fully vaccinated.

Training camps open Tuesday and the pandemic will affect a third NBA season and already means some players will be missing on media day.

The Pacers already have lost backup guard Edmond Sumner, who had surgery last week to repair a torn Achilles tendon and will likely open the season without starting forward T.J. Warren who continues to recover from a stress fracture in his left foot that cost him most of last season.

“Hopefully, it will be weeks, not months,” Carlisle said. “It won’t be days.” 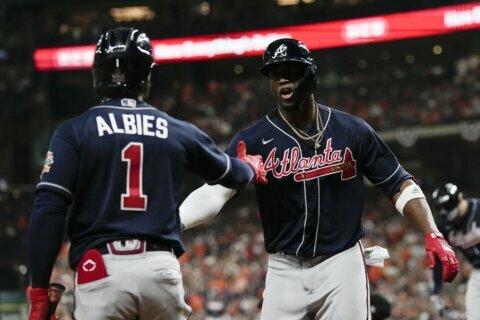 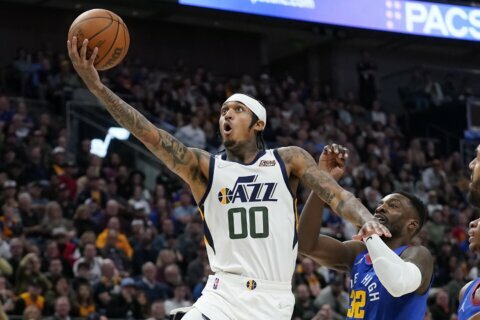 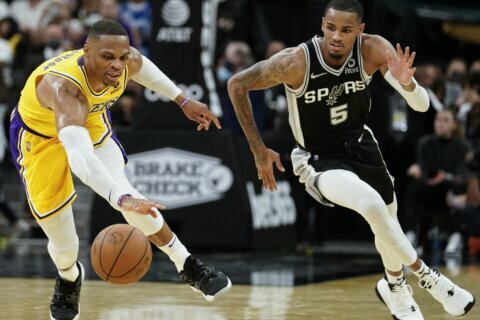