CLEVELAND (AP) — Kevin Love is ready to put a difficult season for himself and the Cleveland Cavaliers behind him.…
Listen now to WTOP News WTOP.com | Alexa | Google Home | WTOP App | 103.5 FM

CLEVELAND (AP) — Kevin Love is ready to put a difficult season for himself and the Cleveland Cavaliers behind him.

The Cavaliers finished with a 22-50 record last season and are attempting to build around a group of young players acquired in the draft or trades.

Love played in only 25 games last season because of a calf injury. He is entering his 14th season and turned 33 this month. The power forward was a key member of Cleveland’s championship team in 2016 during a stretch that saw the Cavaliers advance to the NBA Finals four straight seasons.

Love is optimistic about the role he’ll play this season as training camp opens Tuesday.

“It’s a young team,” he said Monday at the team’s media day. “Obviously, where this is headed and where this is going, but what I’m going to try to be is a positive force. I want to make sure it’s going to be positive, so long as I’m donning a Cavs jersey.”

Love has two years and $60 million remaining on his contract. His agent has said he isn’t interested in a buyout from the Cavaliers.

“The buyout had never even come up,” Love said. “That’s speculation. Sometimes (stuff) is thrown against the wall and people are seeing who’s going to read it and who’s going to see it. For me, that’s never been a thing.”

The Cavaliers strengthened their frontcourt in the offseason, taking center Evan Mobley with the third pick in the draft and acquiring forward Lauri Markkanen from Chicago. Cleveland also signed center Jarrett Allen, picked up in a trade last season, to a $100 million contract extension.

Those moves will likely cut into Love’s playing time and could lead to him coming off the bench. Love said he expects to have a conversation with coach J.B. Bickerstaff in the next week or two about his role.

“If a guy is playing great and affecting the team in the right way, he’s going to play, as he should,” Love said. “Just being the best version of myself and playing as many minutes as I earn, or J.B. sees fit. I trust J.B.”

“For us, our biggest priority is keeping him healthy and on the floor,” general manager Koby Altman said. “Let’s keep him in a range of minutes that will have him available and be super-efficient within those minutes. He can really shoot. He can pass and he knows how to play.”

He withdrew from the U.S. men’s basketball team before the Tokyo Olympics as he continued his recovery from the calf injury. The five-time All-Star believes the time between the Olympics and training camp has been productive.

“The last 10 weeks of taking care of my body, making sure my feet are underneath me as well as mentally preparing for season 14 of something I’ve really been focused on,” Love said. “Just putting my head down, keeping quiet and going about my business.”

Former Team USA basketball director Jerry Colangelo had criticized Love, saying he was out of shape and that it was a mistake to ask him to be on the team.

Love responded on a cable television show last week by using an obscenity to describe his reaction to Colangelo’s comments. Asked about the situation Monday, Love said: “That’s something that I’ve already answered, I’ve already spoken about. I mentioned it to the team. We’ve moved on from there.” 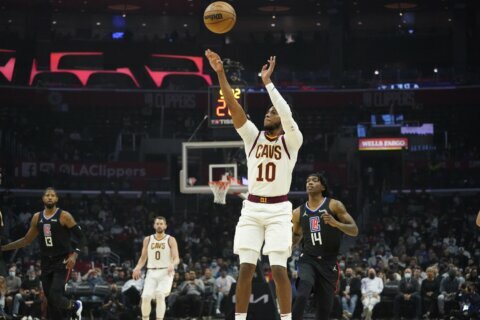 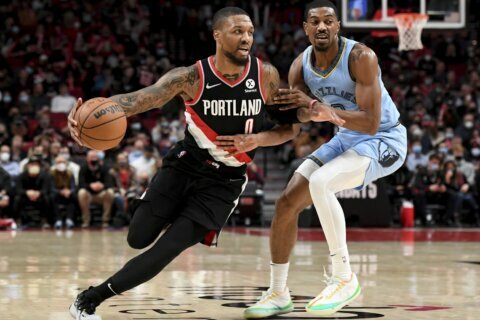 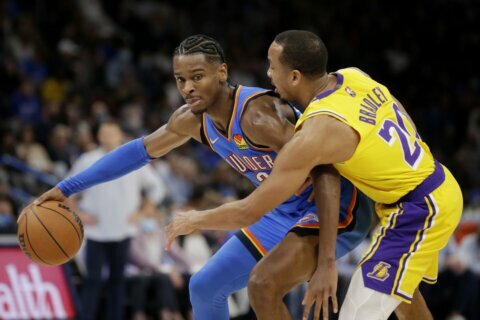 Gilgeous-Alexander, Thunder rally from 26 down to top Lakers