Bullock is getting a $30.5 million, three-year contract after averaging 10.9 points in his second season with the New York Knicks. The 30-year-old is averaging 7.6 points for his career.

Hardaway has agreed to a $74 million, four-year deal after two full seasons as a consistent scorer behind Doncic. Already a two-time All-Star at 22, Doncic is on the verge of signing a five-year supermax extension worth slightly more than $200 million.

The backcourt has been the focus in free agency for the Mavericks, who are sticking with the same frontcourt led by 7-foot-3 Kristaps Porzingis.

New coach Jason Kidd has said he believes Doncic and Porzingis can be the duo the Mavericks envisioned when former general manager Donnie Nelson acquired Porzingis and Hardaway in a blockbuster deal with New York in 2019.

Porzingis was little more than a decoy late in a playoff loss to the Los Angeles Clippers, the second straight year Doncic and Porzingis lost to LA in the first round. Owner Mark Cuban fired Nelson in June, and coach Rick Carlisle resigned the next day.

Nico Harrison replaced Nelson. His biggest move so far was trading Josh Richardson to Boston. The Mavericks hoped for a defensive boost from Richardson, but he was benched late in the season as Hardaway became a starter again.

Dallas wants to improve at the 3-point line, believing that will help Doncic’s playmaking ability. Bullock shot 41% from deep last season and is at 39% for his eight-year career. 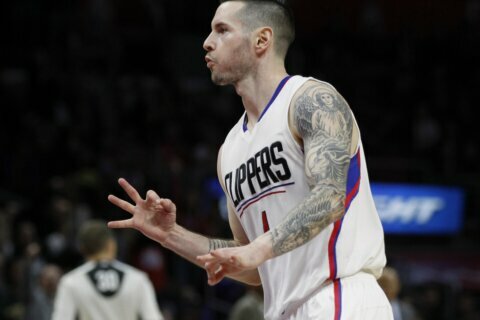