LOS ANGELES (AP) — Kawhi Leonard will re-sign with the Los Angeles Clippers, even though he might miss most of…
Listen now to WTOP News WTOP.com | Alexa | Google Home | WTOP App | 103.5 FM

LOS ANGELES (AP) — Kawhi Leonard will re-sign with the Los Angeles Clippers, even though he might miss most of the upcoming season due to a knee injury.

A person with knowledge of the deal told The Associated Press on Friday that the two sides are still finalizing terms of the contract. The person spoke on condition of anonymity because the deal has not been officially announced.

The Clippers, who reached the Western Conference finals last season, have also agreed to re-sign guard Reggie Jackson and have signed Justise Winslow.

Despite declining his player option for next season last week, Leonard was expected to remain with the Clippers because he could sign a maximum contract worth 35% of the team’s salary cap and would be able to earn upwards of $3 million more for the upcoming season.

Leonard averaged 24.8 points and 6.5 rebounds last season but he was even more dominant in the playoffs. He averaged 30.3 points and 7.7 rebounds before partially tearing the ACL in his right knee during a win over the Utah Jazz in Game 4 of the Western Conference semifinals on June 14.

Jackson averaged 17.8 points during the playoffs last season. Winslow has been plagued by injuries the past two seasons. He averaged 6.8 points in 26 games with Memphis last season. 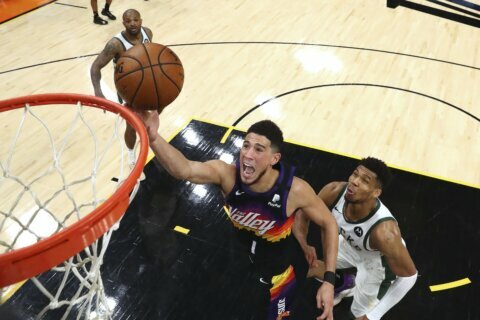