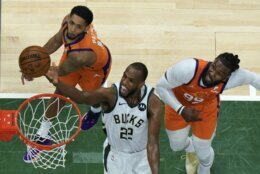 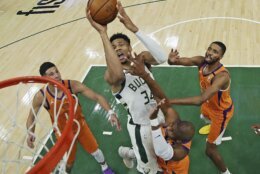 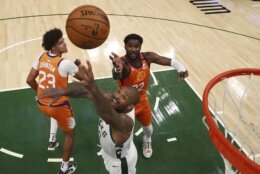 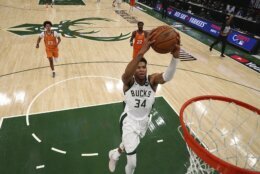 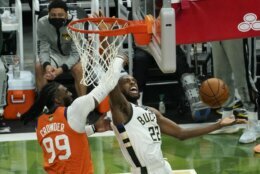 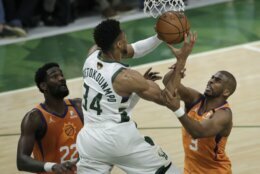 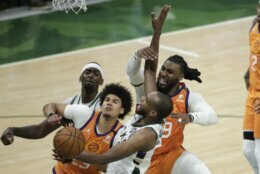 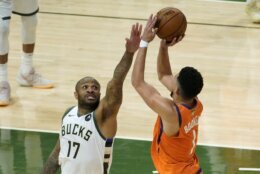 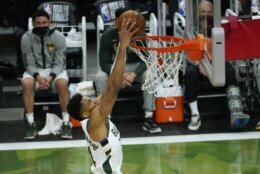 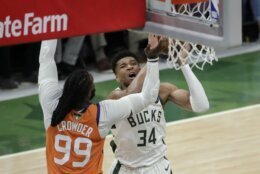 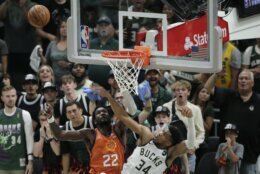 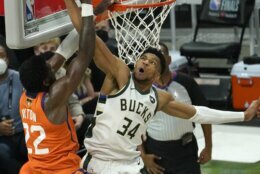 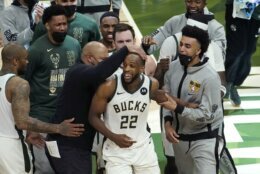 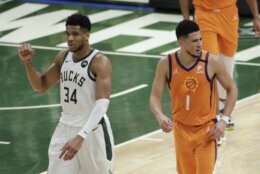 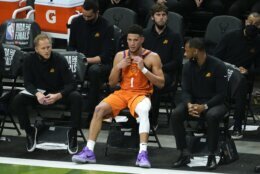 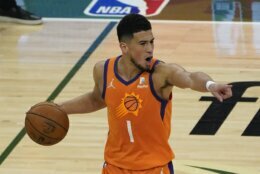 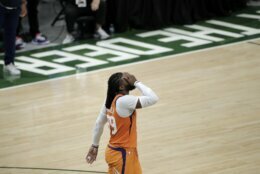 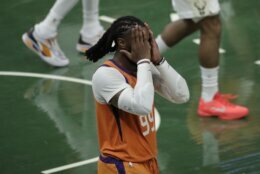 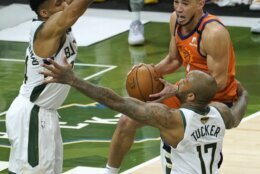 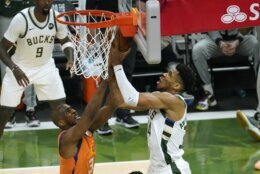 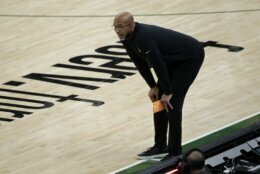 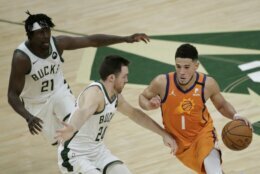 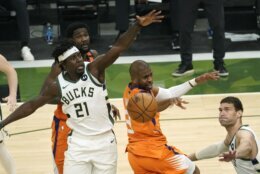 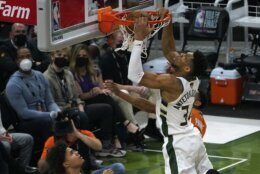 MILWAUKEE (AP) — Khris Middleton is an All-Star with unwavering confidence in his shot, always believing that no matter how poorly he starts that he can turn things around.

“Khris has no fear and he never has,” Milwaukee guard Jrue Holiday said.

Middleton’s big shots — and throw in Giannis Antetokounmpo’s big block — may have turned around the course of these NBA Finals.

Middleton scored 40 points, including 10 straight for the Bucks down the stretch to send them past the Phoenix Suns, 109-103 on Wednesday night to tie the series 2-2.

“We wanted this bad and the team showed it tonight,” Antetokounmpo said.

Middleton’s hot hand and a big block from Antetokounmpo gave the Bucks their second straight victory in the first close game of the series.

Antetokounmpo had 26 points, 14 rebounds and eight assists. His streak of 40-point games ended at two but the only number that matters for the Bucks is on the series scoreboard.

Devin Booker scored 42 points for the Suns, but his foul trouble cost them a chance to build a big lead in the second half. Chris Paul struggled through a 5-for-13 night, finishing with 10 points and five turnovers.

Game 5 is Saturday night in Phoenix.

“This is a tough one but we’ve got to bounce back,” Paul said. “That’s why we fought all season to get home court.”

Phoenix led by two with 2 1/2 minutes left before Middleton made the next two baskets to give Milwaukee a 101-99 edge with 1:28 to play. It appeared the Suns would tie it with a lob pass to center Deandre Ayton but Antetokounmpo swooped in to block it, flexing his muscles to the crowd behind the basket as the Bucks broke the other way on the fast break.

Middleton missed a couple of jumpers but Paul lost the ball after the second one when he slipped and fell down while dribbling. That sent Middleton off for a layup and he followed with four free throws to make it 107-101.

“Nobody caved,” Middleton said. “We stayed with it.”

Brook Lopez had 14 points for the Bucks and Holiday added 13 points, seven rebounds and seven assists. He shot only 4 for 20, but his defense helped knock Paul off his game.

Before Middleton’s run, it appeared it was going to be Booker’s night. He bounced back in a big way from a 3-for-14 night in Game 3 with his third 40-point game of this postseason.

But he had to spend portions of the third and fourth quarters on the bench after picking up fouls and his teammates couldn’t handle things without him.

With the leaders of their only title team in the arena, the Bucks improved to 9-1 at home in the playoffs. They are trying to overcome a 2-0 deficit for the second time in this postseason.

The Suns never got more than two wins in their two previous trips to the NBA Finals but it seemed they were finally headed there Wednesday. Booker had a big finish to the third quarter to send them to the fourth leading 82-76, but he picked up his fifth foul barely a minute into the period and sat for about five minutes.

The Bucks trimmed only three points off the lead before he returned midway through the fourth, but Middleton made sure they surged ahead when it mattered.

“When you have that kind of lead in the fourth, if we can just hold on to the ball and get good possessions, you feel like you can at least hold it there,” Suns coach Monty Williams said.

Antetokounmpo had dominated the previous game with his offense, but the 2020 Defensive Player of the Year made his biggest mark on this game on the other end of the floor.

Perhaps sensing the pressure, both teams fumbled the ball around in the early going, diving on the floor in desperate attempts to save it. The Bucks turned what looked like lost possessions into baskets that way in the first quarter, giving them a boost while their outside shooting was off.

The Bucks, who had a big second quarter in Game 3, had another nice stretch midway through this one with an 8-0 run. That gave them a four-point lead and the margin stayed right around there, with the teams trading the lead, until Middleton’s 3-pointer made it 52-all at the break.

BEST OF THE BUCKS

Kareem Abdul-Jabbar and Oscar Robertson sat next to each other and were given a loud ovation when shown during the first half. Bob Dandridge and Jon McGlocklin were the other members of the Bucks’ only NBA championship team who were at the game.