ATLANTA (AP) — The Atlanta Hawks had top scorer Trae Young back in their starting lineup for Game 6 of the Eastern Conference finals on Saturday night, when Milwaukee’s Giannis Antetokounmpo sat out again.

Antetokounmpo, the two-time MVP, missed his second straight game in the series, which the Bucks were leading 3-2.

Antetokounmpo hyperextended his left knee in Game 4 after landing awkwardly trying to contest a dunk by Clint Capela.

Young was cleared about an hour before the game after being listed as questionable on the NBA’s Saturday injury report.

Coach Nate McMillan said Young would be a game-time decision. Young missed the two previous games with a bone bruise in his right foot after inadvertently stepping on an official’s foot and twisting his ankle in Game 3.

The Hawks proclaimed Young’s return by announcing “He’s back” on the team’s Twitter feed. He showed no sign of favoring the injured foot when he led the team out of the tunnel for pregame warmups and was greeting by a loud ovation from Atlanta fans.

Milwaukee can advance to the NBA Finals for the first time since 1974 with one more victory over the Hawks, who haven’t reached the championship round since moving to Atlanta in 1968.

The East winner will face the Phoenix Suns in the finals. 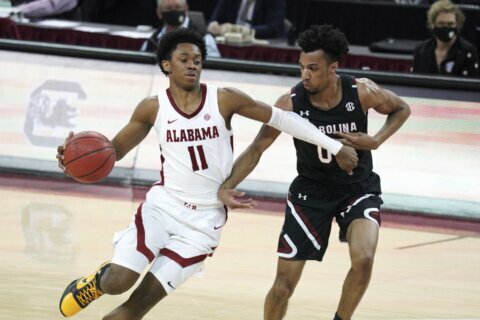