Story line: The Jazz are bidding for what would be their second trip to the Western Conference finals in the last 23 years, while the Clippers are still aiming for their first-ever trip to that round.

Injury watch: Jazz guard Mike Conley has dealt with hamstring issues at least three times this season, and he left Utah’s Round 1 clincher over Memphis with a recurrence. Serge Ibaka (back) was limited to two games in the Clippers’ Round 1 win over Dallas.

Numbers of note: Utah gave up the third-fewest points per game this season (107.2), the Clippers the fourth-fewest (107.8). … The defenses made the other team’s star work for his points this season. Donovan Mitchell shot 43% (yet still averaged 24.7 points) in three games against the Clippers, while Kawhi Leonard shot 42% (yet still averaged 24.5 points) in two games against the Jazz. … The Clippers have held 3-1 leads in each of their last two second-round series (vs. Houston in 2015, vs. Denver in 2020) and lost Game 7s each time. … Utah is 3-0 vs. the Clippers in past playoff series, all of them being first-rounders. … Jazz were the NBA’s best home team this season, and the Clippers went 3-0 on the road in Round 1 vs. Dallas.

Prediction: The Clippers should have plenty of momentum after their Game 7 win Sunday to oust Dallas, while the Jazz got a few days of rest following their win over Memphis. Expect Mitchell and Leonard to rise to the moment, because that’s what elite players do, so this one may hinge on how players like Paul George and Rudy Gobert produce. Jazz in 7. 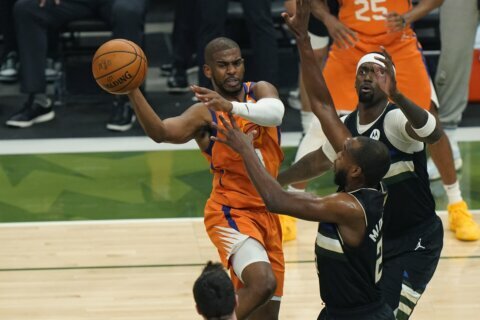 Paul gets more chances to bring Suns, and himself, a title