SAN FRANCISCO (AP) — Emerging from a challenging East Oakland youth when he cheered for the Golden State Warriors from a cramped house, Juan Toscano-Anderson now has that coveted contract from his hometown team.

He is inspiring millions in Mexico where he played and has heritage, too.

The Warriors signed the former two-way forward to a multiyear deal Thursday, also bringing back forward Jordan Bell for the remainder of the season. Toscano-Anderson has long been determined to prove he’s in the NBA for the long haul, talented enough to stay put.

“This is where my heart is. I’m an East Oakland kid, I’m a Warrior,” Toscano-Anderson said. “The Warriors mean everything to me and now I’m on this team, it’s a storybook, it’s a movie, I don’t know, whatever you want to call it.”

It was 20 years ago when teacher Wilhelmina Attles, wife of former Warriors star player and coach Al Attles, encouraged Toscano-Anderson to play basketball. This happened once he transferred schools after having a knife pulled on him in second grade.

And now at age 28 for the first time in his career, he has stability — knowing where he will be next season. He’s planning his first vacation with family, ready to take his mother anywhere she wants to go.

Earlier Thursday, Toscano-Anderson tweeted: “Been up since 530am. Too excited to sleep.” The Warriors later shared a video of him calling his proud mother with the great news.

“It’s just a life-changing contract, a life-changing signature,” Toscano-Anderson said of putting the pen on his contract. “I grew up going to games, so it gave me dreams. From a very young kid, I always wanted to walk into Oracle (Arena) onto that court donning an NBA jersey. I never imagined it would be wearing a Warrior jersey.”

He had 15 people living in a three-bedroom house and didn’t buy his first car since he was 26 — and now Toscano-Anderson plans to help his little brother purchase a first car.

Toscano-Anderson originally signed a two-way contact with the Warriors in December and has provided a big boost off the bench, especially the past couple of weeks with the Warriors down to eight healthy players. He is averaging 5.5 points, 4.3 rebounds and 2.7 assists in 55 games this season. The Oakland native has scored in double figures 10 times, including a career-high 20-point performance on April 15 at Cleveland.

“It feels great for me, I can only imagine how great it feels for Juan and his family,” coach Steve Kerr said Thursday night. “But he’s earned this. He’s done everything we’ve asked and more. He just brings energy and juice to every moment that he comes into the game. … It’s great to see Juan rewarded, and I think he’s got a long career ahead of him. His story’s amazing, and you love stories like this.”

Bell is back for a second stint after spending the 2017-18 and 2018-19 seasons with Golden State. He most recently signed a 10-day contract with the Washington Wizards at the end of April and appeared in five games, scoring 14 points and grabbing 19 rebounds.

“’I’m really excited to have Jordan back. He knows our team, he knows how we play, he understands how to play with Steph (Curry) and Draymond (Green) and the guys,” Kerr said. “He was really productive for us. Started playoff games and gave us big performances in big games. The opportunity to add someone who has all that in the last two games is really important. Normally in this case you get a guy who doesn’t know any of your terminology or style, your philosophy.”

Bell is averaging 3.7 points and 3.1 rebounds in 159 career games with the Warriors, Minnesota, Memphis and Washington.

He is expected to play against New Orleans on Friday night, when the Warriors also are set to have forward Eric Paschall back from a 21-game absence with a strained left hip flexor.

Kerr also hoped to get Andrew Wiggins a break given he has played every game.

Bell is ready to help in any way as Golden State pushes toward the playoffs.

“It’s winning time,” he said. “I can’t feel anything but grateful for an opportunity.” 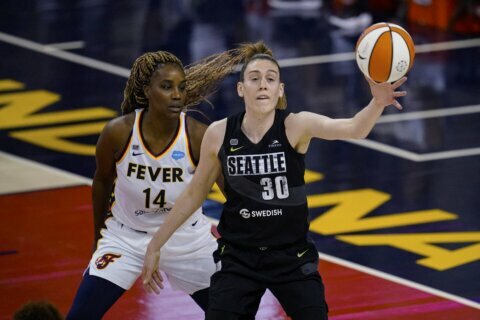 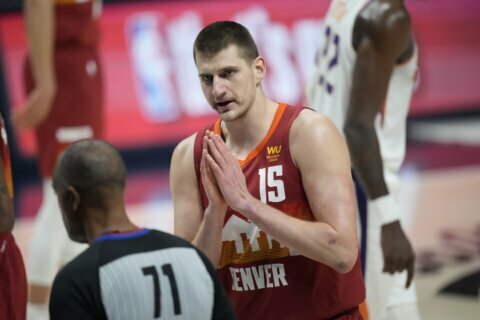