SACRAMENTO, Calif. (AP) — Rudy Gobert wasn’t about to stop his Utah teammates from celebrating after securing the No. 1 spot for the NBA playoffs. He just wants the Jazz to keep focus on the bigger picture.

A year after blowing a 3-1 lead and getting bounced in the first round of the playoffs, the Jazz are headed back to the postseason — and they’re going in with the league’s best record.

“Going through what we went through last year, I learned to enjoy every moment,” Gobert said following Utah’s 121-99 victory over the Sacramento Kings on Sunday night. “That doesnt mean you don’t prepare for what’s coming. Just enjoy the mmoment.”

Jordan Clarkson scored 33 points and Gobert added 13 points and 16 rebounds for the Jazz.

Utah (52-20) won its final two to edge Western Conference-rival Phoenix for the top spot. It’s the first time in franchise history that the Jazz have finished with sole possession of the best record in the NBA.

“As much as the accomplishment, for me you appreciate this group of men and appreciate the opportunity to coach them,” coach Quin Snyder said. “That feeling about our team, I want all of them, all of us, to enjoy this moment because I feel like if we do that, appreciate the regular season, I think that transitions us to the mindset we need to have to try to play well in the playoffs.”

Mike Conley had 11 points, nine assists and six rebounds in his second game back after missing two weeks because of a right hamstring injury. Bojan Bogdanovic had 18 points.

Now comes the waiting game for Snyder’s team. Utah awaits one of the surviving teams from the play-in games that begin Tuesday and end Friday.

“In the Western Conference there’s not going to be anybody you want to play,” Conley said. “Everybody’s capable. We’ll just have to see how it goes.”

Terence Davis had 20 points for Sacramento. The Kings, who started four reserves, finished the season with a three-game losing streak.

“They’ve been one of the best teams, if not the best team, for most of the season,” Kings coach Luke Walton said. “I thought our guys played hard. We just got outmatched.”

A loss to Sacramento in the final regular-season game would have dropped Utah into a tie with Phoenix, and the Suns held the tiebreaker after sweeping the three-game series with the Jazz.

Instead, the Jazz shook off a slow start and thumped the Kings for the second time in three weeks.

Utah led by 15 at halftime and continued to pull away in the second half. Bogdanovich scored nine points and dunked off a bounce pass from Royce O’Neal, while Clarkson added a pair of 3s as part of a 20-4 run in the third quarter. O’Neal’s 3-pointer later pushed Utah’s lead to 90-61.

Clarkson sank three free throws midway through the fourth to make it 113-87.

“It’s definitely a great feeling because we know we put a lot into it,” Clarkson said. “It started in the bubble (last year) and then through this year with guys going out, guys coming back, everybody staying tough and going through it. We’ve got bigger goals. We’re trying to play big-time in the playoffs and do something special.”

Conley, limited to 16 minutes against Oklahoma City on Friday in his return from a right hamstring injury, got the Jazz going after they sputtered early. He had 11 points with three 3s and seven assists to help Utah to a 64-49 lead.

The week off will give Donovan Mitchell extra time to heal his sprained right ankle. Mitchell hasn’t played since April 16 but is expected back in time for the playoffs.

Jazz: Utah had twice previously tied for the best record in 1998 and in the lockout-shortened season in 1999. … The Jazz finished with a franchise-record 1,205 3-pointers. … Utah set franchise records for scoring (154) and margin of victory (49) when the two teams played on April 28 at Golden 1 Center.

Jazz: Utah will get a week of rest before facing the No. 8 seed in the playoffs. The play-in rounds wrap up Friday.

Kings: Sacramento heads into the offseason facing questions about Walton’s future with the team and a roster that underachieved for much of the season. Holmes is the only player of significance who will be a free agent. 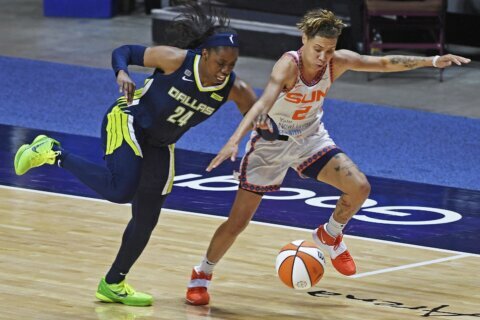 Bonner, Charles each get double-doubles in Connecticut’s win