Anthony Edwards had 19 points and nine rebounds, and D’Angelo Russell added 15 points and seven assists for the Timberwolves, who have won three in a row for the first time since starting 3-0 in the 2019-20 season.

Minnesota won in Houston for the first time since Feb. 17, 2012, snapping a 14-game losing streak.

“It was a game that was going to come down to effort, getting an extra possession, good defense and getting your hand on a ball somehow,” Timberwolves coach Chris Finch said.

Houston tied the game at 102 with 2:38 remaining. On the following play, Towns fouled out of the game with an offensive foul. He added seven rebounds and five assists.

Without Towns, Minnesota closed out the game on a 12-5 run.

“We just wanted to turn up the physicality on defense,” Minnesota’s Jarred Vanderbilt said. “Offensively, we wanted to get our shot, and I felt like we did that down the stretch.”

The game matched the teams at the bottom of the Western Conference standings. Minnesota improved to 19-44, going 3 1/2 games up on Houston (15-47).

Finch said before the game that he told the team’s core players that there won’t be unnecessary rest days down the stretch as the team prioritizes building chemistry and an identity to take into the offseason.

“They’re putting their bodies out there, and they’re trying to hit first, whether it’s offense or defense,” Finch said. “We grow into the game. We just need to start the game with that kind of physicality, and we’re getting better at that.”

Houston was playing its first game since Monday’s news that John Wall would likely miss the remainder of the season with a right hamstring strain. Wall has averaged 20.6 points and 6.9 assists in his first season in Houston.

The Timberwolves led 28-23 at the end of the first quarter and 59-50 at halftime. Houston outscored Minnesota 29-19 in the third quarter to enter the fourth with a 79-78 lead.

“It tells you a lot about this season,” Rockets coach Stephen Silas said. “If you have rest and you have practice, then you can play well.”

Timberwolves: Juancho Hernangomez scored in double figures for the third time in the past four games. He had 16 points in the first half and finished with 22, just shy of his season-high 25 points on Jan. 5 against Denver. … Minnesota’s reserves outscored Houston’s 54-23.

Silas spoke highly of the way Wall played in his first season in Houston, despite the adversity and struggles.

“When we needed him the most in certain games, he’s come out and given us 30, played 40 minutes, and all of those things show the heart and character that he has,” Silas said.

Tate was sharing the floor with Rookie of the Year contender Edwards and was asked about growing conversations that he should also be part of the conversation. Entering Tuesday, Tate totaled 672 points, 324 rebounds, 141 assists, 78 steals, 34 blocks and 48 3s, joining only LeBron James in 2003-04 as the only rookies to have those numbers through 61 games.

“It’s humbling, it’s great that people are starting to see the work I’ve put in,” Tate said. “But I’m just trying to stay here as long as I can. The awards and recognition, it’ll come. I’m just trying to be consistent and don’t cheat the game. It’s been a crazy year, we’ve been through a lot, but I’m excited to see what we can build in the future.” 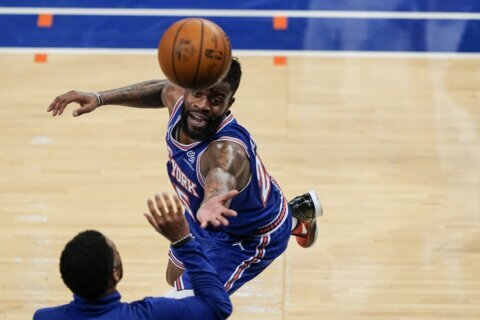 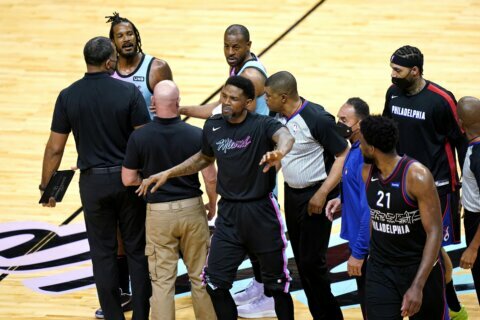