CLEVELAND (AP) — They’ve been teammates on a historic championship team and counted on to lead some really bad ones. Kevin Love and Matthew Dellavedova were also linked this season by injuries that kept them off the court for months.

They came back Thursday night — together.

And, just maybe, in time to save the Cavaliers’ season.

Love and Dellavedova made their long-delayed returns in Cleveland’s 114-94 loss to the Philadelphia 76ers. Although it was the Cavs’ fourth straight loss, fifth in six games and dropped them to 17-31, the game also felt something like a restart for a young team ravaged by injuries.

With Love spacing the floor, Cleveland’s offense looked more in sync, even dangerous. He scored 13 points in the first quarter and played 20 minutes in just his fifth game this season.

And with Dellavedova diving for loose balls in his season debut and first game in more than a year, there was a level of needed toughness. Of course, there were some of the same usual problems — turnovers, forced shots and a third-quarter meltdown — that have plagued the Cavs.

But with Love and Dellavedova out there, they looked better.

“Obviously, we’ve got to get there, get their minutes up a little bit so they can play more in the third and fourth quarter, which will be helpful. But our guys are learning to play with them and watching two pros, two high-level pros at that.”

Love’s return ended one of the most frustrating junctures of the five-time All-Star’s career.

He severely strained his calf in late December, missed 33 games and returned in March only to suffer a setback, the result of scar tissue breaking down. Love could have stopped there, but he was determined to salvage his season.

He drained a 3-pointer on his first shot and made his next two. On each trip down the court, the 32-year-old rediscovered some of old joy.

“It just made me so happy to go out there and just play basketball,” he said. “That was the first thing I said, after my first blow was just man, I just missed the game so much.”

His minutes are expected to increase in coming games.

“I felt a lot more like myself,” he said. “I’m obviously not there yet, but I knew that I was coming into this game. I felt confident that I could get in some sort of a rhythm.

Love will likely play more on Saturday night in Miami, where the Cavs have lost 19 straight. Now that he’s back, Love insists he never lost confidence that he’d be able to return and contribute at a high level.

“I’m not gonna let that doubt creep into my head,” he said. “Adversity makes us stronger. Like, I truly believe that.”

His hard-nosed play has resulted in a history of head injuries. And in December he sustained a concussion in Cleveland’s exhibition opener. The 30-year-old’s symptoms were so severe he was unable to attend games. His wife, Anna, had to put away some of their baby boy’s noisy toys so as not to bother Dellavedova.

Once around his teammates again, Dellavedova became an extension of the coaching staff and helped young guards Collin Sexton and Darius Garland. He also underwent an appendectomy, further delaying his comeback.

As always, many of Dellavedova’s contributions — zero points, five assists in 16 minutes — on Thursday didn’t show up in the box score. He buckled down on defense, threw himself into a pile to force a jump ball and jawed at a couple of the Sixers.

“It just goes to show you his commitment, his dedication, but what intelligence can bring to the game,” Bickerstaff said. “His mind wasn’t off for 13 months. When you play the way that he plays and you think the game that way that he thinks it, you can have an impact. Toughness on the defensive end, leadership, he’s always a bonus.

Love called Dellavedova “the lifeblood of this team,” and now that the two remaining members from Cleveland’s 2016 championship team are back, the Cavs — just three games behind Chicago for the final play-in spot — are feeling a little feisty.

“The East is pretty tight and we should have goals to at least get into the play-in games, get into the playoffs,” Dellavedova said. “That’s the biggest thing we have to talk about now. There’s 24 games left, let’s make a run and have something to compete for.” 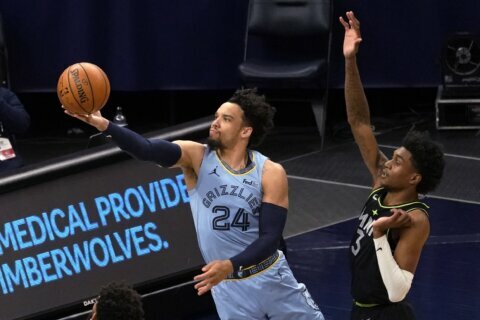