LOS ANGELES (AP) — When Anthony Davis’ right leg became too painful to play on two months ago, the big man and the Los Angeles Lakers decided he wouldn’t return until he was completely ready to be himself again.

More than two months later, Davis is confident that time has arrived with 14 regular-season games left in the Lakers’ push to defend their NBA title.

Davis intends to play Thursday night when the Lakers open a four-game road trip at Dallas, he said after a workout at the team’s training complex. He hasn’t suited up since Feb. 14, missing Los Angeles’ last 30 games in the longest injury absence of his nine-year NBA career.

“I wanted to make sure I was coming back 100%, because it wouldn’t be fair to myself, wouldn’t be fair to my team,” Davis said Wednesday. “I feel great. These last games leading to the playoffs, a lot of teams aren’t healthy, a lot of players aren’t healthy. I’m 100%, and we’ve got Bron coming back as well who’s going to be 100% healthy. I think we’ve put ourselves in a good position.”

Indeed, the Lakers (35-23) have managed to stay in the No. 5 spot in the Western Conference standings despite playing without Davis for nine weeks and without LeBron James since March 20. The Lakers went 14-16 without Davis, and they’re 7-9 since both Davis and James went down.

Coach Frank Vogel said James is still “probably a couple of weeks or so” away from returning from his sprained ankle.

Davis will start when he returns, but will only play about 15 minutes in his first game back. Vogel intends to monitor his superstar’s acclimation closely, and his return could be pushed back another game if Davis feels sore on Thursday morning.

“Honestly, if you’re out for this long, it usually takes a couple of weeks to feel like you really have your legs under you, and your rhythm and timing is back,” Vogel said. “It’s going to take some time, and as far as the minutes restriction, it’s really going to be evaluated on a day-by-day basis.”

The absences of Davis and James potentially were a huge setback for the Lakers’ repeat hopes. But now that the Lakers’ supporting cast has made it nearly certain the team is still playoff-bound, the Lakers are about to have two rested, hungry superstars when the postseason begins in a month.

Davis’ injury left him in serious pain in his right heel and calf during his final game at Denver on Valentine’s Day. The big man had already skipped a handful of games early in the regular season after the short turnaround from the Lakers’ playoff run in the Florida bubble, but the shock of that last escalation in his leg woes caught Davis’ full attention.

“It was something I’ve never felt before as far as pain,” Davis said. “I didn’t want to have to go through that again. … I’ve felt pain there before, just going through the process the first time I injured it, but the second time — knock on wood, I never tore an Achilles, but I kind of felt like sharp pain, like it was ripping, which I never felt before. It was tough to flex my foot. I knew it was something serious. It wasn’t as serious as it could have been, but it was still a pretty significant injury.”

So the Lakers shut down Davis near the midpoint of this unusual NBA season. Los Angeles scuffled through the next five weeks, going 7-7 until James also went down with his sprained ankle.

And yet the absence of their two roster cornerstones still hasn’t sunk the Lakers. With Dennis Schröder, Montrezl Harrell and Kyle Kuzma leading a team effort, Los Angeles has played roughly .500 ball and dropped only from second to fifth in the conference standings, staying right behind Denver.

Davis and James have been with the team at nearly every game, and Davis sees benefits beyond rest from his time on the sidelines.

“I think that’s how I stayed engaged and got my fix not being able to play, just being in the gym with the guys and breaking down the games for the guys and helping them learn,” Davis said. “It kind of helped me become a better leader as well. It was good for me, but I think it was also good for them to hear my voice.” 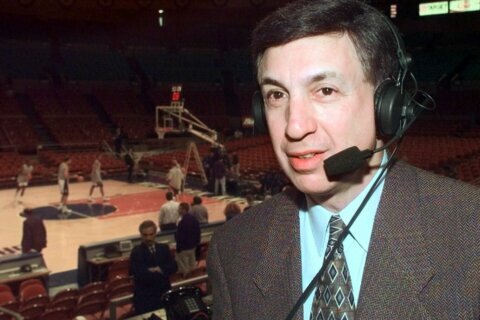 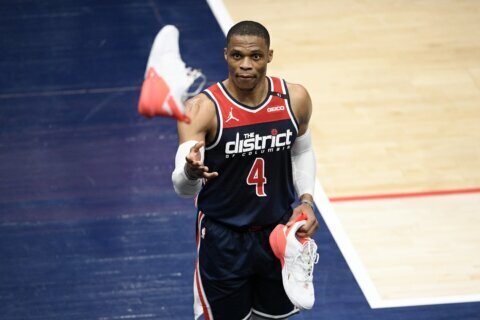 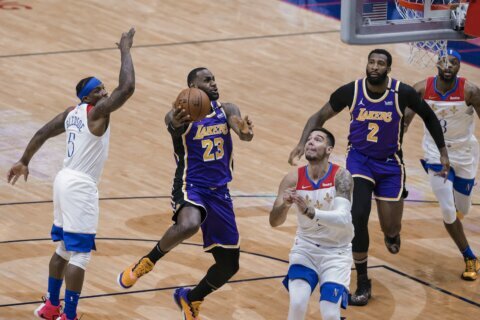