MINNEAPOLIS (AP) — Karl-Anthony Towns had 29 points and 16 rebounds, and Juancho Hernangomez had 19 points off the bench as the Minnesota Timberwolves came back to beat the Houston Rockets 107-101 on Friday night.

Minnesota trailed by as many as 19 in the second half, but closed with a 22-0 run to stop a four-game losing streak a day after standing pat at the trade deadline. Towns had 14 points during the final stretch as the Timberwolves won for the fourth time in 15 games under new coach Chris Finch.

“We won the game. It’s great, but we didn’t deserve it,” Towns said. “I can tell you right now there was no cheering or jubilation in that locker room. That was a very disappointing night for all of us.”

John Wall had 14 points and a season-high 15 assists for Houston. Christian Wood scored 24 and Ben McLemore added a season-high 21 points on a season-best seven 3-pointers for the rebuilding Rockets.

Houston went scoreless the final 7:31 of the game and shot 3 of 22 in the fourth quarter.

“We had a good recipe as to how to attack this team and we went away from it,” Rockets coach Stephen Silas said. “We started trying to do it on our own. … We were a little stagnant, a little disjointed. Yeah, disappointing.”

The teams continue a back-to-back set in Minnesota on Saturday.

Houston’s transformation took another turn Wednesday when it traded Victor Oladipo to the Miami Heat for Kelly Olynyk, Avery Bradley and the right to exchange first-round draft picks in 2022. Olynyk and Bradley were held out Friday with the trade still pending.

Short-handed, the Rockets wouldn’t be able to make their big lead hold.

After being held to three points in the second and third quarters, Towns came back to pull Minnesota ahead. He added eight assists.

“I thought a great job of just kind of putting away all his frustrations,” Finch said of Towns. “There were many frustrations throughout the game and he just kind of came in, he hit those two 3s early, sparked the run back for us and just really did a good job of playing tough, playing through all the hits and rebounding. He really got some big rebounds for us.”

The Timberwolves led for much of the first half while taking care of the ball. Minnesota’s first turnover came with 5:16 left in the half. Carelessness crept in and Houston took advantage.

The Rockets went on a 22-7 run to close the half, while the Wolves had five turnovers. Meanwhile, McLemore made his first six 3-point attempts in the half.

Wall took over in the third quarter. He had seven points and three assists to open the third, accounting for 100% of the team’s points during the stretch.

“Our drive-and-kick game was great,” Silas said. “We were getting the ball up the court quickly in the first half and, shoot, all the way up to the fourth quarter and it just stopped. It just slowed down. We can’t play that way. We have to have an energy in our offensive game.”

Rockets: Aside from Olynyk and Bradley, Houston was also without Danuel House Jr. for personal reasons and Kevin Porter Jr. due to right quad soreness. Eric Gordon, David Nwaba and Dante Exum are still absent with injuries. … House didn’t make the trip to Minnesota due to deaths in his family, the Houston Chronicle reported.

Timberwolves: Towns pulled 13 ahead of Kevin Love for second in rebounds in team history with 4,465. Kevin Garnett has the franchise mark with 10,718. … Rookie Anthony Edwards struggled, shooting 4 of 17 and scoring 12 points. … Hernangomez had 10 of his points in the third.

Finch said he expects Malik Beasley, the team’s second-leading scorer with 20.5 points per game, to return from his 12-game suspension Saturday.

“It will just be a matter of getting with the performance team and seeing what his minutes and rotations and duration and all that kind of stuff will look like,” Finch said. 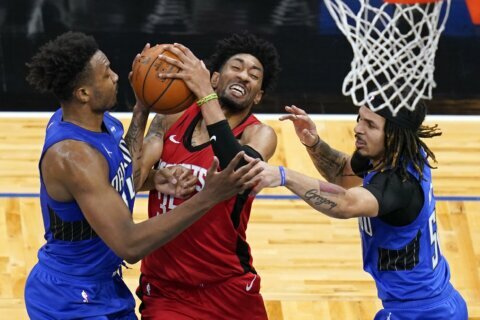