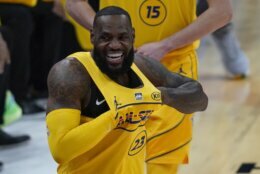 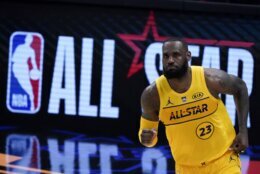 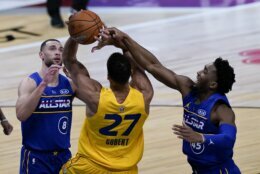 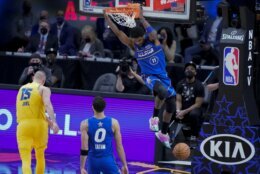 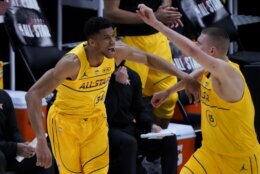 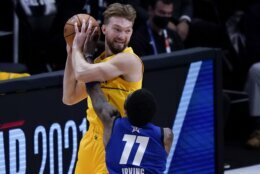 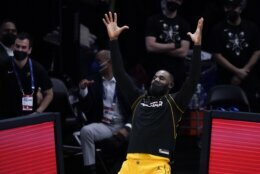 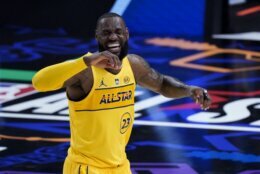 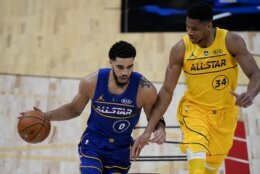 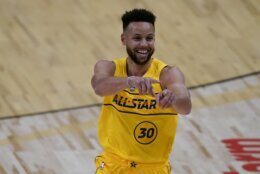 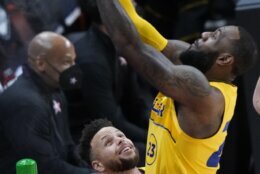 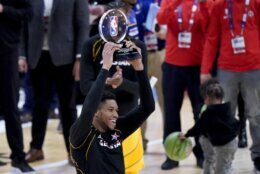 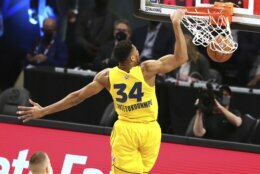 ATLANTA (AP) — In the midst of a pandemic, this was assured of being an NBA All-Star Game like no other.

The stands were mostly empty. The crowd noise was largely piped in. There were no A-list celebrities sitting courtside. Two players had to sit out after getting haircuts.

But in the end, it had a familiar feel.

Knocking down shots from all over the court, LeBron James’ powerhouse squad closed the first half with a dominating run to set up a 170-150 romp over Team Durant in the league’s 70th midseason showcase Sunday night.

The top vote-getters in each conference have picked the teams the last four years, a duty that James has earned every season.

“I think he’s got a future as a GM,” said Damian Lillard, another of James’ inspired selections. “He always gets it right.”

Antetokounmpo was the game’s MVP after shooting 16 of 16 for 35 points, even making all three of his attempts beyond the 3-point stripe. It was the most baskets without a miss in All-Star Game history.

“I’m just having fun,” the Greek star said. “Sometimes when you’re having fun and not thinking about the outcome, you just let your instincts take over.”

Curry chipped in with 28 points, while Lillard had 32.

James spent most of the night admiring his drafting skill from the bench. He played less than 13 minutes, scored just four points, and didn’t return to the court in the second half.

Instead, he munched a snack on the bench.

“I know he was managing his minutes tonight,” Curry said. “We had a great time, representing him as captain. It was a memorable night for sure.”

It sure was for Curry, who won the 3-point competition beforehand, then went 8 of 16 from beyond the arc in the game.

Lillard matched him, also making 8 of 16 from 3-point range.

This All-Star Game sure was different than the previous 69.

Determined to pull off an exhibition that is huge for TV revenue and the league’s worldwide brand, the NBA staged the game in a mostly empty downtown arena, a made-for-TV extravaganza that was symbolic of the coronavirus era.

Despite extensive safety protocols in place, two players didn’t even make it to tipoff. Philadelphia stars Joel Embiid and Ben Simmons were ruled out because they got haircuts from a barber who tested positive for COVID-19.

The only good thing for Durant: He didn’t have to participate in this shellacking, sitting out the game with an ailing hamstring.

On a night highlighting Historically Black Colleges and Universities, Team LeBron swept the first three quarters and cruised to the final target score, earning a total of $750,000 for its charity, the Thurgood Marshall College Fund.

The game got out of hand late in the second quarter.

With scant defense being played, Team LeBron took turns dunking off alley-oop passes. Chris Paul delivered back-to-back lobs that Lillard and Curry slammed through. Then, it was Paul on the receiving end of a payback pass from Curry.

After showing it could handle shots up close, Team LeBron headed outside in the final seconds of the half.

Lillard pulled up for a 3-pointer from the half-court line. Not to be outdone, Curry knocked down one from virtually the same spot.

Amid the joyful moments, the atmosphere at State Farm Arena was downright eerie compared to a normal All-Star Game.

Instead of a packed house, with A-list celebrities crammed into prime courtside seats, this game was attended by a smattering of hand-picked guests. They had plenty of room to spread out in a 17,000-seat venue that was essentially transformed into a giant television studio, with socially distanced spectators kept far from the court.

Towering video screens were set up behind the benches. Vegas-style lights flashed around the arena. Recorded crowd noise blared over the sound system. The entertainment was provided by the host Atlanta Hawks, who didn’t have any players in the game but were represented by their cheerleaders, drum line and DJ.

To address fears that one of its biggest events would become a super-spreader for a virus that has killed more than a half-million Americans, the NBA pared down its usual weekend-long ritual of extravagant parties, gridlocked streets and people watching

This All-Star Game was a one-night-only event, with a pair of skill competitions held shortly before the game and the Dunk Contest squeezed into the halftime break. The players flew in Saturday afternoon and were largely confined to a nearby hotel except for their time on the court.

“This is when everyone in basketball all over the world comes to one city,” James said before the game. “We’re able to sit back and go, ‘Wow, this is the game we have built.’ It’s a beautiful weekend for all walks of life, on the floor and off the floor.

“But I’m sitting here in my hotel room, isolated. My family’s not here. I’m by myself. It’s just different, to say the least, compared to previous years.”

All-Star Weekend was crammed into a few hours.

During the pregame, Indiana forward Domantas Sabonis defeated Orlando center Nikola Vucevic in the Skills Challenge, redeeming last year’s finals loss to Bam Adebayo. That was followed by Curry knocking off Utah’s Mike Conley to capture the 3-Point Contest for the second time. The Warriors star added to the long-range title he won in 2015.

At halftime, Portland’s Anfernee Simons defeated New York Knicks rookie Obi Toppin in the Slam Dunk Contest, nearly kissing the rim with his winning throw-down. Cassius Stanley of the Indiana Pacers was eliminated in the opening round.

Team Durant: Zion Williamson of New Orleans started the game in place of Embiid. The Pelicans forward had 10 points. … Durant’s team heaved up 72 3-pointers, but made only 27 (37.5%).

Team LeBron: Paul had 16 assists, passing Magic Johnson’s record for most career All-Star assists with 128. … Lillard ended the game with another long 3-pointer. Curry was waiving to the spectators before it even went in. … James’ team shot 63.6% from the field, including 31 of 61 from 3-point range. 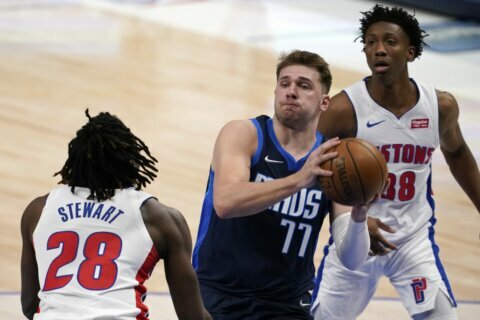