Spurs, short-handed and reeling, get back on practice floor

The San Antonio Spurs are still dealing with a coronavirus outbreak, their state is reeling from the aftereffects of a…
Listen now to WTOP News WTOP.com | Alexa | Google Home | WTOP App | 103.5 FM

The San Antonio Spurs are still dealing with a coronavirus outbreak, their state is reeling from the aftereffects of a deadly icy blast that has affected millions of Texans, and one of their best players is mourning the death of a parent.

Given all that, basketball seems secondary to the Spurs right now.

But they were back to work Monday, holding a full-fledged practice for the first time since it was revealed last week that at least four players tested positive for COVID-19. They will be without at least six players when they return to the court Wednesday at Oklahoma City.

“We’ve always had the philosophy that there are all these people, or groups of people, who have it worse than you do,” Popovich said, wearing a cap bearing the logo of the San Antonio Food Bank. “And considering our positions in this world, we are very, very well off.”

The Spurs said five players — Rudy Gay, Keldon Johnson, Devin Vassell, Quinndary Weatherspoon and Derrick White — are away from the team because of health and safety protocols and will not travel with the club to Oklahoma City. Popovich indicated that not all of them have been able to return to San Antonio yet because of NBA rules; the outbreak hit with the Spurs on a road trip last week.

DeMar DeRozan is also out for Wednesday’s game for personal reasons; he revealed late last week that his father died.

“When you lose a parent, it’s a difficult situation,” Popovich said. “But I’ve been in touch with him and he’s very mature, kind man and he’s doing what he needs to do with his family right now.”

When a player is listed as out because of the protocols, that typically means he has tested positive for COVID-19, has a suspected positive test or is out for reasons related to contact tracing. And before any player who has been positive is cleared to return, he first needs to clear several medical exams — which means it’s unclear when any of the five players out for virus-related reasons may return.

There may be one encouraging piece of roster news: LaMarcus Aldridge, who hasn’t played since Feb. 1 because of right hip flexor soreness, may be ready to return. The Spurs plan on making that final determination on Tuesday.

“I’m sure he was probably a little winded,” Popovich said.

The NBA initially said last week that four Spurs players had tested positive for COVID-19, without identifying any by name. They last played Feb. 14, beating Charlotte for their fifth win in six games and improving to 16-11 — five games over the .500 mark for the first time since April 2019.

The news of the four positive tests hit the team not long afterward. Road games against Detroit, Cleveland, New York and Indiana were all postponed, as were a pair of Hornets games in an abundance of caution while contact tracing studies could be completed.

Those postponements lifted the number of games called off for virus-related reasons this season to 29, not including a handful of other games that were rearranged to fill some gaps in the schedule.

The Spurs are the fourth team to have an unplanned break of at least a week this season because of virus-related issues. Boston went seven days between games, Memphis went 12 days and Washington went 13 days.

Then came the storm, which basically crippled much of Texas for days.

“Complaining, or feeling sorry for oneself, that’s not in the picture,” Popovich said. “It’s inappropriate. Not deserved. Only thank yous for what we all have. So, you know, at this time, you just think about all the people that have gone through hell. And as we’ve seen from all the reports, it didn’t have to be that way.” 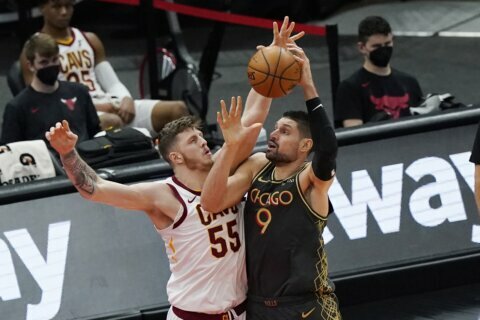