DALLAS (AP) — Kristaps Porzingis had 27 points, 13 rebounds and six blocks, Luka Doncic scored 26 points and the Dallas Mavericks played before home fans for the first time in 11 months and held off the Minnesota Timberwolves 127-122 on Monday night.

Tim Hardaway added 24 points off the bench as the Mavericks won their second straight at home after a six-game skid at the American Airlines Center. They led by 25 in the second quarter before the Timberwolves pulled within 123-120 with 50 seconds left.

Josh Richardson hit a jumper with 27 seconds to go for a five-point lead and Malik Beasley missed a 3-pointer seconds later.

“We’ve got to do a better job of closing out games,” Dallas coach Rick Carlisle said. “This is an experience we’re going to have to learn from. We’re a young team that simply has to learn from these situations.”

Beasley tied a season high with 30 points, 22 in the fourth quarter, and rookie Anthony Edwards added 22 for the Timberwolves, who finished a five-game road trip 1-4.

It was the second straight loss for the Wolves in which they rallied from a huge deficit early and nearly won. On Saturday at Oklahoma City, they came from 23 down to lead in the fourth quarter only to lose by two.

“We’re finding ourselves as a group,” Minnesota coach Ryan Saunders said. “I liked some of the progress.”

The Mavericks led 71-51 at halftime behind 18 points from Hardaway. It was the third straight game in which they have scored at least 70 points in a half to set a franchise record.

Mavericks: It was Doncic’s career-best 11th straight game with at least 25 points. … Last in 3-point percentage going into the game at 33.8%, Dallas hit 6 of 12 3-pointers during the first quarter.

ROAR OF THE CROWD

Monday’s game was the first in which Dallas will invite 1,500 vaccinated frontline and essential workers, including medical professionals, police, firefighters, teachers and food service staffers, to sit in the American Airlines Center’s lower bowl. At halftime, the gathering of “true champions” was saluted in a tribute taped by members of the Mavericks’ 2010-11 NBA championship team.

“It helps bring back a little bit of normalcy,” Carlisle said before the game.

Two-time All-Star center Karl-Anthony Towns missed his 12th consecutive game while in COVID-19 health and safety protocols, but his status on the Wolves’ injury report was upgraded from out to doubtful. Saunders said Towns must show the team certain physical signs, including his lungs being able to handle prolonged on-court work.

Towns also missed seven games earlier this season with a wrist injury and has played in only four games.

Timberwolves: Host the Los Angeles Clippers on Wednesday in their first home game since Jan. 31.

Mavericks: Host Atlanta on Wednesday for the middle game of a seven-game homestand. The Mavericks won at Atlanta 112-106 last Wednesday. 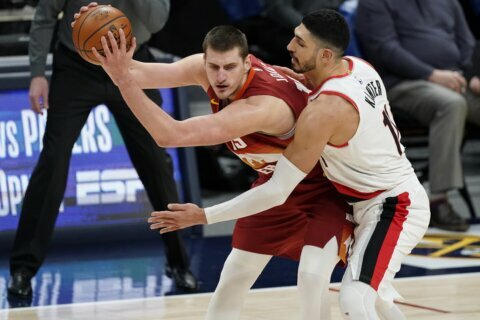 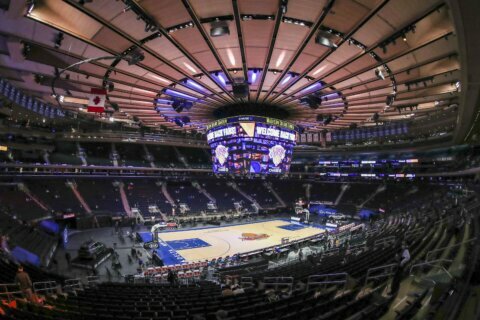 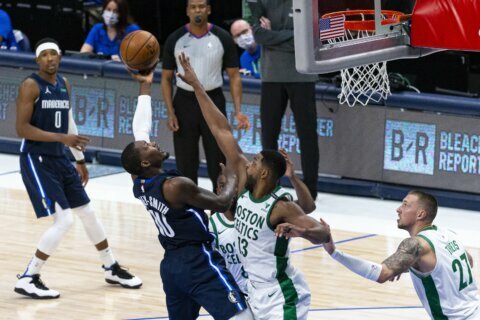