DETROIT (AP) — The Detroit Pistons are taking another step in their rebuilding process, planning to part ways with Blake Griffin.

Detroit plans to keep the star forward out of the lineup while he and the organization work out a decision on his future, a clear sign his days with the team could be numbered.

“After extensive conversation with Blake’s representatives, it has been determined that we will begin working to facilitate a resolution regarding his future with the team that maximizes the interests of both parties,” Pistons general manager Troy Weaver said in a statement Monday. “We respect all the effort Blake has put forth in Detroit and his career and will work to achieve a positive outcome for all involved.”

Griffin, who turns 32 next month, came to Detroit in a trade during the 2017-18 season as part of the franchise’s push to become relevant again.

The Pistons, though, have made only one postseason appearance with him and have spent much of the last year overhauling their roster in earnest. Detroit is 8-19 this season, and Griffin has already missed seven games.

“It’s a situation where we’re rebuilding and retooling and we have to give those minutes to guys like Saddiq (Bey),” coach Dwane Casey said.

If Griffin is traded or leaves via a buyout, it could give the popular veteran a chance to play more meaningful games than what Detroit can offer this season.

“I am grateful to the Pistons for understanding what I want to accomplish in my career and for working together on the best path forward,” Griffin said.

Griffin stayed mostly healthy during a terrific 2018-19 season and averaged a career-high 24.5 points, but he missed two of the four games when Detroit was swept in the first round of the playoffs.

“He carried us that entire year,” Casey said. “He had a career, stats year. He’s a stand-up guy. He will be in the Hall of Fame someday.”

Griffin was one of few holdovers on the roster when this season began, and the Pistons recently traded one of them when they sent Derrick Rose to the New York Knicks. Bey and Isaiah Stewart, both rookies, have contributed enough to give fans some reason for optimism. Jerami Grant has also been a good addition, averaging 23 points per game in his first season after coming to Detroit from Denver.

Bey was named NBA Eastern Conference Player of the Week on Monday after averaging nearly 18 points while helping the Pistons win three of four games. Bey is the second first-year player to win the award for the franchise, joining Kelly Tripucka, who did it in March 14, 1982.

With so many new faces, Griffin has been an afterthought at times, averaging 12.3 points — a career low — but Casey is convinced he can help a lot of NBA teams.

“He can be a piece with a contending team,” he said. 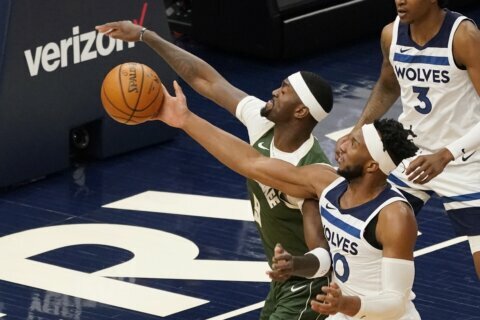