OKLAHOMA CITY (AP) — Jamal Murray continued his hot scoring with 26 points and Nikola Jokic had his eighth triple-double of the season to help the Denver Nuggets rout the Oklahoma City Thunder 126-96 on Saturday night.

Murray, averaging 30.1 points in his previous seven games, made 9 of 15 field goals and Denver shot 55%.

Darius Bazley had 22 points for the Thunder. Ty Jerome and Isaiah Roby added 15 each.

Denver, loser of four of its past six games and six of seven on the road, controlled this one from the outset in beating the Thunder for the third time in three tries this season.

“I felt tonight was Denver Nuggets basketball,” coach Michael Malone said. “We played for each other. I told the guys, we have to get back to being a team that’s hard to guard.”

Oklahoma City had no answers. Porter, who had an 18-10 double-double in a home loss to Washington on Thursday night, made all four of his 3-point shots in the first quarter and scored 14 points as the Nuggets led by as many as 23.

The two-point loss to Washington was painful, as the Nuggets had a 4-on-1 breakaway opportunity in the final seconds but settled for a 3-pointer that missed badly.

“It just shows what kind of team we can be when we’re locked in and focused and all on the same page,” Barton said.

Jokic said that in the NBA, “you need to forget things really quick. The next one is coming so fast you can’t think about it.”

The Thunder’s second unit, led by Jerome and Roby, helped cut the deficit to 47-36 midway through the second quarter. But the Nuggets ended the half on an 18-7 run, including 3-pointers by Porter and Murray, and held the Thunder to one basket in the final 3:45.

“We got off to a rough start, but it’s a long game,” Bazley said. “Defensively we were just trying to figure it out.”

That didn’t happen. Jokic scored nine of his points in the third quarter when Denver pushed the lead beyond 30, which allowed Jokic, Murray and the other starters to take it easy the rest of the way.

“I think we moved the ball really well, we were finding open shots, we were making the shots,” Jokic said. “We had some flow in our offense, so it was really easy to play when you play like that.”

Nuggets: P.J. Dozier, who had missed 15 games with a right hamstring strain, scored nine points. … The Nuggets were again without Paul Millsap, JaMychal Green and Gary Harris, all nursing injuries. … This was the first of a four-game trip before the All-Star break. …

Thunder: The Thunder were 11 of 47 from 3-point range. … The game ended a four-game homestand. The Thunder do not play at home again until March 11, following the All-Star break.

Gilgeous-Alexander came in averaging 23.6 points per game. He had scored a career-high 42 against San Antonio on Wednesday and 24 Friday against Atlanta.

Nuggets: At Chicago on Monday night.

Thunder: At Dallas on Wednesday night. 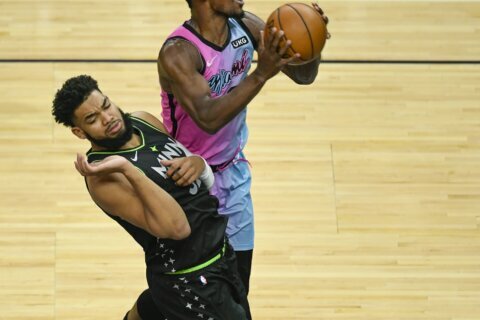 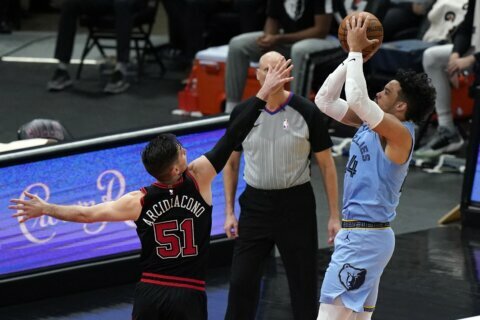