NEW YORK (AP) — Austin Rivers scored 23 points, including 14 straight for the Knicks down the stretch, and Julius Randle had 30 points, 16 rebounds and seven assists as New York won its third straight by beating the Utah Jazz 112-100 on Wednesday night.

The Knicks trailed by 18 in the first half but outplayed the Jazz in the second and won for the fifth time in six games.

“It just shows you our spirit and our growth,” Rivers said. “This is a young team, so for us to do that against a team like this, a top tier-caliber playoff team, that’s pretty impressive.”

“When he gets going like that he’s hard to stop,” Knicks coach Tom Thibodeau said, “and he’s got a lot of toughness to him. Mental toughness, physical toughness, the courage to take those shots, but we had a lot of guys step up in the second half and really fight.”

Elfrid Payton scored 22 points for the Knicks (5-3), who have already won more times under Thibodeau than they did in their first 22 games last season under David Fizdale, who was fired when they were 4-18.

Jordan Clarkson had 19 points and Donovan Mitchell added 18 for the Jazz, who were swept in a back-to-back set of games in New York. The Brooklyn Nets routed them 130-96 on Tuesday, but Mitchell said the Jazz will get things figured out.

It appeared the Jazz would bounce back easily after building a big lead in the second quarter, but the Knicks outscored Utah 68-44 in the second half.

It was tied at 96 with under five minutes to play before Rivers’ surge. He scored five straight points before a basket by Mitchell, then nailed consecutive 3s to give New York a 107-98 lead with 2:22 to go. Mitchell scored again but Rivers answered with another 3 for a 10-point lead with 47 seconds remaining.

Utah coach Quin Snyder said it was hard to have a normal preparation for Wednesday’s game because of the difficulty concentrating on basketball while watching the violence in Washington.

Yet, the Jazz appeared much more ready to play Wednesday than a night earlier, when they trailed 35-14 after one quarter. A 19-5 spurt pushed their lead to 34-20 and they were ahead by as much as 18 later in the period.

But the Knicks outscored the Jazz 34-19 in the third.

Jazz: Rudy Gobert had 14 points, 12 rebounds and five blocks. … Clarkson was credited with a basket in the first quarter when his pass from near the basket was batted by a Knicks defender into the hoop.

Knicks: Former Jazz G Alec Burks missed his fifth straight game with a sprained left ankle. Burks, who made 10 of his 15 3-pointers in a strong start to his Knicks career, underwent further testing and the team said he will be in a walking boot and re-evaluated in a week to 10 days. … Reggie Bullock was in the starting lineup after being listed as questionable earlier in the day with a sore left knee. C Nerlens Noel was out with a sprained left ankle and sore left knee.

The first play of the second quarter was actually the last play of the first. Mitchell Robinson was called for goaltending on Mike Conley’s shot for what appeared to end the first quarter and the teams went to their benches. But after review, referees determined there were still 0.7 seconds left in the first. Because the teams had already started their break, they played the final 0.7 seconds when they returned, and when the horn sounded they remained on the court and quickly began the next quarter. 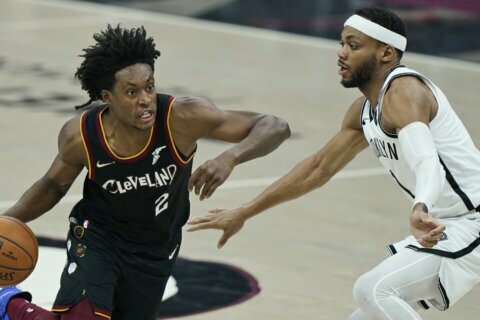 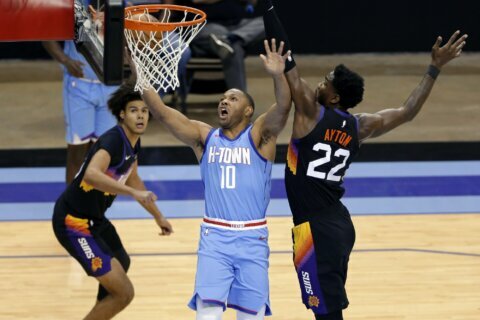 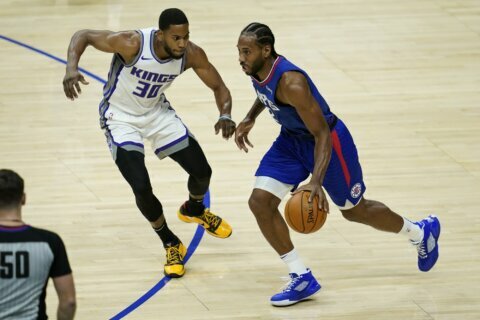