MIAMI (AP) — Udonis Haslem announced Friday that he’s returning for an 18th season with the Miami Heat, and left the door open for extending his career after that.

Only five NBA players have spent a career of that length with one franchise. Dirk Nowitzki spent 21 years with Dallas, Kobe Bryant 20 years with the Los Angeles Lakers, Tim Duncan spent 19 with San Antonio, John Stockton spent 19 with Utah and Reggie Miller spent 18 with Indiana.

Haslem doesn’t play regularly and hasn’t for years: He got into just four games last season and has scored 76 points in the last four seasons combined. His impact on the team comes from what he says and does in the locker room, and that’s why Heat coach Erik Spoelstra lobbied for Haslem to come back.

“He’s just an incredible rock of stability and leadership and mentorship,” Spoelstra said during the NBA Finals last month. “That’s at all levels. It’s not just to our young players. It’s to our veteran players. And he provides just great guidance and mentorship to this head coach as well. I love him.”

So will this be the end?

“Spo told me don’t answer that question,” Haslem said at his announcement, held inside one of the Subway restaurants he owns in South Florida. “Spo said we’ll continue to talk about it.”

Haslem’s next appearance for the Heat will make him the oldest player in franchise history. His final appearance this past season was Aug. 14, at 40 years and 66 days old. That’s three days younger than Juwan Howard was when he played his final Heat game on April 17, 2013.

Haslem was one of three 40-somethings to play in the NBA last season: Vince Carter was 43 when he retired after the season and Jamal Crawford, 40, appeared in one game with the Brooklyn Nets during the NBA restart at Walt Disney World.

Crawford is about 2 1/2 months older than Haslem and is unsigned for next season.

Haslem is Miami’s all-time leading rebounder, ranks second behind only Dwyane Wade in games and minutes played, and is No. 7 on the Heat career scoring list. 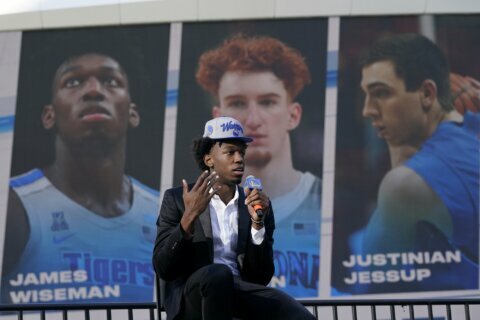