If there’s a silver lining, it’s this: He believes it could have been worse.

Toronto would have ordinarily had home-court advantage in its Eastern Conference semifinal matchup against the Boston Celtics, and for the Raptors to fall into a 2-0 series hole — as they have here — that means they would have dropped two straight games at home and been forced to face a raucous crowd in Boston for Game 3.

But in the bubble, home-court isn’t an issue and Lowry thinks that a win when the series resumes Thursday would be enough to get the Raptors back on track.

“This is not a situation we’d like to be in,” Lowry said. “But it’s not the normal situation in the playoffs where we lost two home games. We just lost two games. We have a chance to get one game. That’s all we have to do, get one game. One game at a time. The Celtics, they’ve been playing extremely well. We have to find a way to get ourselves going.”

The Celtics don’t just lead the series 2-0 — they’re 3-0 against Toronto in the restart bubble at Walt Disney World and are 5-1 against the reigning NBA champions this season.

“We’re going to look at things we did well and things we could do better,” Celtics forward Jayson Tatum said. “No matter the circumstances, up 10, down 10, we’re going to keep playing.”

“The shots are there,” Lowry said. “We’ve got to make them.”

There are two games inside the NBA bubble Thursday, the other being Game 1 of the Western Conference semifinal series between the second-seeded Los Angeles Clippers and third-seeded Denver Nuggets.

A look at Thursday’s Raptors-Celtics game:

— NEED TO KNOW: The Celtics are 6-0 to start a postseason for the second time and are looking to match a franchise record with a seventh consecutive playoff win. The last teams to open a postseason run with seven straight wins were Cleveland and Golden State in 2017.

— KEEP AN EYE ON: Boston has been sloppy with the ball in both games and is still up 2-0. If the Celtics cut down on the turnovers, the Raptors are in even bigger trouble. If Toronto turns more of them into points, then advantage Raptors.

— INJURY WATCH: Lowry sprained his ankle in Round 1; he’s logged big minutes in the first two games of this series, but he’s gone 1 for 12 from 3-point range. It begs the question if he’s getting the same lift he was getting in Round 1, when he shot 35% from beyond the arc.

— PRESSURE IS ON: All on Toronto. The Raptors know nobody has successfully escaped a 3-0 series hole in NBA history. The season won’t end Thursday, no matter what happens, but all reasonable hope of advancing hinges on this game. 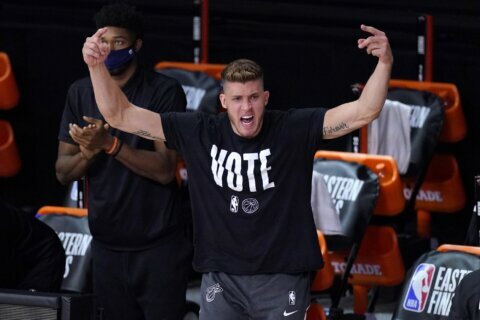