And now he’s out.

Rivers announced in a statement posted to Twitter on Monday that he is not returning as coach. The move comes about two weeks after the Clippers wasted a 3-1 series lead and lost to the Denver Nuggets in the Western Conference semifinals.

“Doc has been a terrific coach for the Clippers, an incredible ambassador, and a pillar of strength during tumultuous times,” Clippers Chairman Steve Ballmer said in a statement. “He won a heck of a lot of games and laid a foundation for this franchise.”

The Clippers said Rivers and Ballmer came to the decision jointly.

Rivers spent seven seasons with the Clippers, making the playoffs in six of them — major success for a once-woebegone franchise. This season’s team, with the summer 2019 additions of Kawhi Leonard and Paul George, was expected to compete for a championship.

But losing three closeout opportunities to the Nuggets cost the Clippers a chance to play the Los Angeles Lakers in the West finals, and likely played a role in Rivers not remaining as coach.

“When I took this job, my goals were to make this a winning basketball program, a free agent destination, and bring a championship to this organization,” Rivers wrote in the statement. “While I was able to accomplish most of my goals, I won’t be able to see them all through.”

Rivers went 356-208 over seven seasons with the Clippers, taking them to the West second round three times. But the franchise has never made the conference finals, and going 0-3 in chance to get there this year was a devastating blow.

Expectations were high, and on the night the season ended, Rivers took responsibility.

“We didn’t meet them. That’s the bottom line,” Rivers said on Sept. 15 after the Game 7 loss. “I’m the coach and I’ll take any blame for it. But we didn’t meet our expectations, clearly.”

This was the third time Rivers saw one of his teams waste a 3-1 series lead. It also happened with eighth-seeded Orlando against top-seeded Detroit in 2003, and with the Clippers against Houston in 2015.

Rivers thanked fans for their support.

“Though it was a disappointing end to our season, you are right there and I know what this team is capable of accomplishing with your support,” Rivers said. “Thank you to all the players, coaches, and staff for helping us get here. Most importantly, thank you to the fans. We went through a lot, and I am grateful for my time here.”

The Clippers’ job becomes the sixth current vacancy in the NBA, along with Houston, Indiana, Philadelphia, Oklahoma City and New Orleans. New York, Brooklyn and Chicago have already filled vacancies in their offseasons.

Rivers’ departure means the league also is down to four Black coaches currently with jobs: Lloyd Pierce in Atlanta, J.B. Bickerstaff in Cleveland, Monty Williams in Phoenix and Dwane Casey in Detroit. Rivers is the third Black coach to either step down or be fired this offseason, joining Nate McMillan in Indiana and Alvin Gentry in New Orleans.

Sam Cassell and Tyronn Lue were both assistants on this Clippers team under Rivers. Lue already has won an NBA title in Cleveland, and Rivers has long said that Cassell is ready to become a head coach. It’s possible they could be among the candidates to take over.

“I am immeasurably grateful to Doc for his commitment and contributions to the Clippers and the city of Los Angeles,” Ballmer said. “I am also extremely confident in our front office and our players. We will find the right coach to lead us forward and help us reach our ultimate goals. We will begin the search and interview process immediately.” 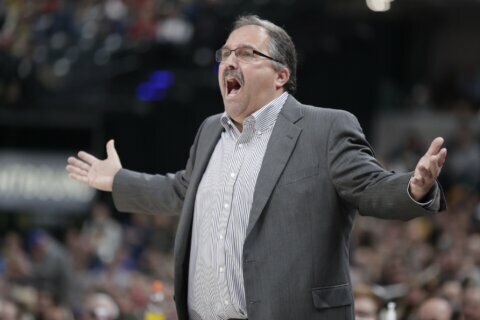