Toughest NBA rival is bubble, where ‘every day is Wednesday’

LAKE BUENA VISTA, Fla. (AP) — In a normal NBA playoff series Mike D’Antoni would be taking his Houston Rockets on the road.

Finished with the first two games, it would be time to switch sites and head to Oklahoma City for the next two.

With the Rockets leading 2-0, he might tell them all they’ve done is win their home games, warn them not to get complacent knowing the Thunder would be dangerous in their own building.

Coaches can’t count on the usual mind tricks in the bubble, where the only thing that seems to change from day to day is what time the rain shower passes through. More than ever, it’s up to players to motivate themselves.

“So, every day is going to be the same — like it is here in the bubble,” D’Antoni said. “Every day is Wednesday, but we have to understand the urgency of today.”

It was actually Thursday. Not that there’s much difference in one day, or even one week.

To walk away with an NBA championship a team has to win 16 games over about two months and numerous factors can derail the quest. Teams have already been at Disney more than six weeks and this postseason, the biggest X-factor is the bubble.

There was a novelty when teams first arrived at Disney. Players were happy to be back together with teammates to finish a season that was suspended in March because of the coronavirus pandemic. They fished, golfed and did other activities, documenting their exploits on social media.

The fun part has worn off. Now, it feels like work.

“For me, one thing I’ll say is that we play a game or we have a practice and obviously we’re in the bubble,” Bucks star and league MVP candidate Giannis Antetokounmpo said. “We don’t get to go home. We don’t get to be away from basketball, even for a few hours.

“If things were normal, we’d be back home playing in our home court and after the game we’d go home. We’d go home and spend time with our family, watch a movie, eat your favorite foods, sleep in your own bed. You’re just comfortable. But now it just feels like we’re always at work. You cannot escape basketball.”

That seemed particularly difficult for Milwaukee, which scuffled through the eight seeding games and then dropped its opener against eighth-seeded Orlando. A team that enjoys its fun, players acting out wrestling moves in the moments before their games, the Bucks didn’t take to the bubble, with guard George Hill calling it “stressful.”

Teams began practicing at Disney on July 9. It’s been a month since they started playing scrimmage games.

Those games didn’t count. They do now, yet when the playoffs began Monday, there was no infusion of energy that made it look different from the previous week.

“They all feel the same,” Lakers All-Star Anthony Davis said. “Obviously we know it’s the playoffs but as far as the environment, the atmosphere, I don’t think anything really changed.”

Before Game 3, the teams will switch “home” and “road” locker rooms and benches, and arrive on the court to see the signage around them has switched to the lower-seeded team’s. That’s about it.

In a season that normally runs from late September through mid-June for teams that reach the NBA Finals, coaches sometimes find the best place to build a team is away from the court. Coach Gregg Popovich has made outings to restaurants for good food and drink an important part of the Spurs organization while winning five championships.

Milwaukee coach Mike Budenholzer was an assistant on Popovich’s staff and took some of those traditions with him when he left to be a head coach, first in Atlanta and now in Milwaukee. The Bucks have had team meals together at Disney, hopeful but uncertain it has the same effect.

“I don’t know if it has the same feeling of going out in a city and getting away, but I think we’ve done some things to try to replicate that, get away from basketball, do some activities,” Budenholzer said. “I think it’s good to have balance in life and the bubble makes that challenging, but I think us along with all the other teams are trying different ways to allow our players some balance and at least mentally maybe think they’re away from basketball.”

Problem is, when players get back on the court, it doesn’t feel like the basketball they know.

Hill compared games in the bubble to playing open gym, when there’s also no crowd. But it’s not just fans in the seats that players are missing. No one is driving to the arena, walking the fashion runway through the back tunnels of facilities, greeting well-wishing ushers and security guards in front of TV cameras, which was part of players’ routines.

Players are still searching for ways to compensate and even coaches can’t help them much. Indiana’s Nate McMillan played in the NBA Finals and coached in the Olympics, but neither is preparation for the bubble.

Things could get easier at the end of the first round, when family members are allowed to come when the bubble is down to just eight teams. But that’s still potentially 10 days away, with Game 7s scheduled for Aug. 30 if necessary.

In the meantime, teams behind in their series now have to figure out how to change the results without a change of scenery.

“In the regular world, you know what I mean, not COVID, not a bubble,” Oklahoma City guard Chris Paul said, “we’d be going back home for two games. Not this.”

It is definitely a whole new game. 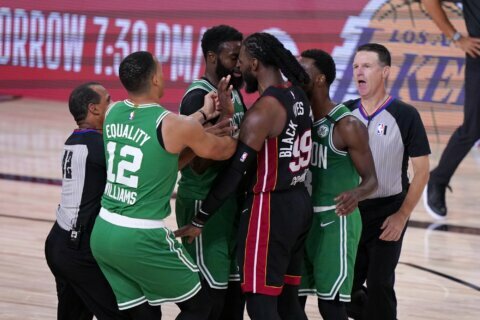