Heat hoping their ‘culture’ pays off at NBA restart

LAKE BUENA VISTA, Fla. (AP) — The Miami Heat like to have sayings, or buzz words, on the shirts that they wear to work every day. And one of the shirts that coach Erik Spoelstra likes the most is printed with a simple one-word message.

The Heat use that word probably more than any team in the NBA, and those shirts are a badge of honor. Ever since Pat Riley arrived in South Florida a quarter-century ago, the Heat mandate has been to be the toughest, hardest-working, best-conditioned team in the league — the taproots of the culture that Riley insists will have them ready for anything.

That’s why this incredibly strange NBA season — halted by a pandemic and now resuming in a bubble at Walt Disney World where everyone is separated from their families, friends and normal lives — is being looked at by the Heat as the ultimate opportunity. The way they see it, the toughest team in these times will end up hoisting the Larry O’Brien Trophy in October.

“You have to talk about it and rely on your structure and your culture and the habits that you’ve already built in terms of mental toughness,” Spoelstra said. “This championship run will require an incredible amount of emotional and mental stamina. There’s no question about it and that challenge, I think, is that is the type of thing, type of challenge that our team and our players really thrive on.”

At 41-24 when the season was halted, with Jimmy Butler taking over as the leader of the team in his first Miami season and with a young core led by the likes of All-Star Bam Adebayo, breakout 3-point marksman Duncan Robinson and with sixth-man award candidate Goran Dragic leading the way off the bench as he thrives in a new role, the Heat thought they were primed for a deep playoff run.

They’re playing for seeding now, with designs on peaking for the start of the playoffs around Aug. 17.

It was far from a certainty that Leonard would have been back for the start of the playoffs because of a nasty left ankle injury that knocked him out of a game against Philadelphia on Feb. 3. But he’s back now, and the Heat — who got starters Adebayo and Kendrick Nunn into the bubble this week after excused absences — expect to be at full strength when the playoffs begin.

Miami actually had a chance to clinch a playoff spot on the last night before the season was suspended, but lost at home to Charlotte. The Heat lost seven of their first nine games without Leonard, though were showing signs of returning to form when play was halted.

Even in a shortened season, Miami will likely set a franchise single-season record for 3-pointers made. The Heat — led by Robinson’s team record of 243 and counting — have already made 868 3’s this season. That’s just 60 shy of matching the team mark set a year ago. The Heat, who have never finished any season leading the NBA in 3-point percentage, are the league’s best so far this season at 38.3%.

Adebayo is a strong Most Improved Player candidate and he’ll get All-NBA votes as well, after a season that included his first All-Star berth and a victory at the Skills Competition at All-Star weekend. He has 19 games this season where he’s made at least two-thirds of his shots from the floor; the Heat are 15-4 in those games.

Miami will finish this season with a winning record, and in Spoelstra’s 12 seasons in charge the Heat have finished below the .500 mark only once. And not that they matter much anymore, this is Miami’s 14th season with a division title; since the Heat won their first in 1996-97, no team in any division has more. 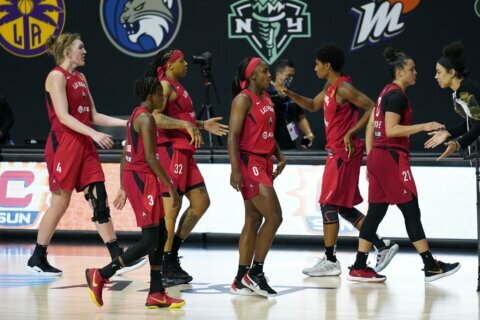