The oddsmakers in Las Vegas usually know what they’re talking about. But even they get things wrong from time to…
Listen now to WTOP News WTOP.com | Alexa | Google Home | WTOP App | 103.5 FM

The oddsmakers in Las Vegas usually know what they’re talking about.

But even they get things wrong from time to time, and this season in the NBA there have been a few notable misses from all those preseason prognostications — specifically, ones made in relation to the Memphis Grizzlies and Oklahoma City Thunder.

The Grizzlies have already topped most preseason projections for their win total. The sports books had them around 27 wins, and the Ja Morant-led club already has 28 wins and is holding down the Western Conference’s No. 8 playoff spot with 28 games left.

“We are just young, very athletic and just get out and run,” said Morant, a clear Rookie of the Year front-runner and probably the favorite at this point. “I feel like we all have something to prove. We just go out with this chip on our shoulder. We keep proving people wrong. But we go out every night and play together.”

And the Thunder, who were expected to freefall after losing Paul George, were slotted by most books as a 32-win team or so. They’re at 33-22, firmly in the West playoff race, led by a resurgent All-Star in Chris Paul.

It’s clear that many thought the Thunder — the supposedly rebuilding Thunder — wouldn’t be a postseason team. Then again, many of those same people probably thought Paul wasn’t still capable of leading the way he has this season.

“For me, it’s always about the journey,” Paul said. “It’s about working hard, and it’s the analytics and the statistics that say at this age you can do this or you can do that. … I think it’s more about competing with yourself and not worry about what everybody else saying.”

There have been a couple other very notable surprises in Miami and Toronto.

The Heat didn’t make the playoffs last year, lost Dwyane Wade to retirement and brought in Jimmy Butler to lead a largely very young, very unproven core this season. And it has worked: The Heat are in the mix for home-court in the first round, and are thinking even bigger than that.

And then there’s the Raptors.

They lost NBA Finals MVP Kawhi Leonard, the MVP of this year’s All-Star Game. They lost Danny Green. They’ve been walloped this year by injuries. Despite it all, they’re No. 2 in the East right now and aren’t just on pace to win more regular-season games than they did in their championship season a year ago — they’re on pace to set a franchise record.

“The journey is the best part about it,” Raptors All-Star guard Kyle Lowry said. “You’ve got to enjoy and have fun with the journey every single day. … The thing that matters to me is that we’re continuing to be a better team every single night.”

It’s worth taking one more look inside some numbers of that wild fourth quarter of Sunday’s All-Star Game, and how the intensity got seriously ramped up with the new target-score, untimed-play format for the last period in Chicago.

To begin, the game wasn’t shorter with the clock being turned off and the teams playing for a score of 157 — it was longer. An Associated Press analysis of the fourth quarter shows the teams were on the floor for about 14:11, more than the customary 12 minutes.

A few other nuggets:

Dunks: There were 50 by the AP count in the first three quarters, including four in a span of 33 seconds. In the fourth quarter, only three dunks.

Fouls: The teams combined for 14 fouls in the first three quarters, then committed 21 in the fourth.

Shooting: Team LeBron was shooting 52% after three quarters, then dipped to 42% in the fourth. But Team Giannis went from sailing to sputtering — 59% in the first three quarters, 26% the rest of the way.

The NBPA had its winter meeting in the Bahamas on Monday. Irving is replacing Pau Gasol, whose three-year term expired.

“At this point in my career, I wanted to join forces with those guys and take a bigger role outside of the basketball court and within our union,” Irving said. “I want to help move the union forward with innovative ideas, not only on social issues but also with business ventures into a new space.”

A short week, but here’s games to watch starting Thursday when the season resumes:

Friday, New Orleans at Portland: A pair of teams looking to get hot and sneak in down the stretch.

Saturday, Cleveland at Miami: The Heat will send Dwyane Wade’s No. 3 jersey to the rafters.

Sunday, Boston at L.A. Lakers: Celtics vs. Lakers, especially when both are good, is always must-watch.

Monday, Memphis at L.A. Clippers: Grizzlies are No. 8 out West, but their remaining schedule is brutal. 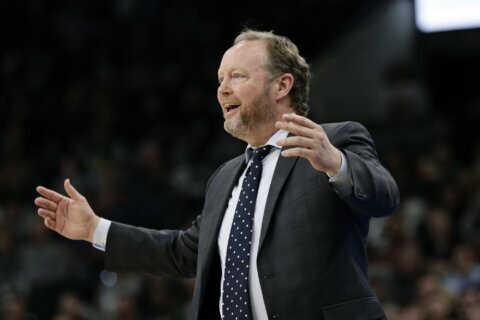 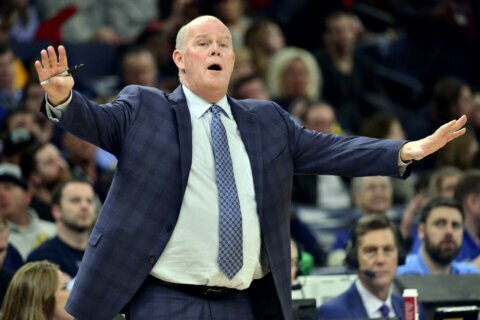