SAN FRANCISCO (AP) — Playing the second half of a back-to-back and without three injured starters, the Denver Nuggets needed…

SAN FRANCISCO (AP) — Playing the second half of a back-to-back and without three injured starters, the Denver Nuggets needed a boost from their bench and pair of late free throws from Malik Beasley to extend Golden State’s longest losing streak in nearly 18 years.

Beasley made two free throws with 8.9 seconds left in overtime, and the short-handed Nuggets handed the Warriors their 10th consecutive loss with a 134-131 victory Thursday night.

Beasley scored 27 points with five 3-pointers, one night after he played only seven minutes in the Nuggets’ win over Charlotte on Wednesday.

“I know it hasn’t been easy for that kid, but he never pouts, never quits,” Denver coach Mike Malone said. “Even on games that he doesn’t play, he’s upstairs working his butt off. Hard work pays off and he deserves it.”

The Nuggets played without injured starters Paul Millsap, Gary Harris and Jamal Murray but got 63 points off the bench. Beasley led the way, while Michael Porter Jr. had 18 points and Mason Plumlee added 15 points and 15 rebounds.

“Guys look forward to an opportunity like this,” Plumlee said. “You’ve got guys out and people need to step up and make shots, make plays. Guys did that. This says that we’re deep.”

Denver trailed by 19 in the first half, but went on a late run to force overtime. The Nuggets then scored eight straight in the extra period, but couldn’t shake Golden State until Beasley’s two free throws.

The Warriors’ Damion Lee missed a 3-pointer at the buzzer.

Alec Burks scored 25 for Golden State, and D’Angelo Russell had 21 points and six assists. It’s the longest slide for the Warriors since they also dropped 10 in a row March 9-24, 2002.

“We came back, just couldn’t quite get over the hump,” Golden State coach Steve Kerr said. “Denver is a hell of a team and they deserve a lot of credit.”

Denver closed the fourth quarter on an 11-5 run. Jokic’s short hook tied the game at 113 after Eric Paschall’s 3-pointer had given the Warriors a two-point lead. Burks missed a 3-pointer at the end of regulation.

Denver lost its poise earlier in the game.

An angry Jokic was whistled for a technical foul in the second quarter and had to be ushered away from officials by Malone. Moments later after Jokic scored on a tip-in, Barton was hit with a technical.

“Every time we thought we stole the game, we gave it back, then we stole it again,” Malone said. “That’s a fun game to watch.”

Golden State star Klay Thompson was on the court in uniform taking shots before the game, a significant and symbolic moment in his recovery from ACL surgery. Thompson has not played this season. The Warriors plan to re-evaluate his situation during the All-Star break.

Nuggets: Plumlee scored five straight in overtime for Denver, four coming on putbacks. … Millsap and Harris continue to be sidelined by knee and groin injuries, respectively. Murray sprained his left ankle during Wednesday’s game with Charlotte.

Warriors: Jacob Evans III suffered a concussion and broken nose during Tuesday’s loss to Dallas. Evans has entered the NBA’s concussion protocol and will wear a protective mask once he is cleared to return.

Nuggets: host the Pacers on Sunday. The Nuggets have a 10-game winning streak at home against Indiana.

Warriors: play the Magic on Saturday at Chase Center. Golden State lost in Orlando earlier this season, but has won six straight at home against the Magic. 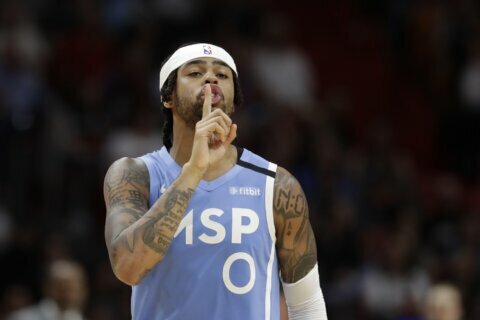 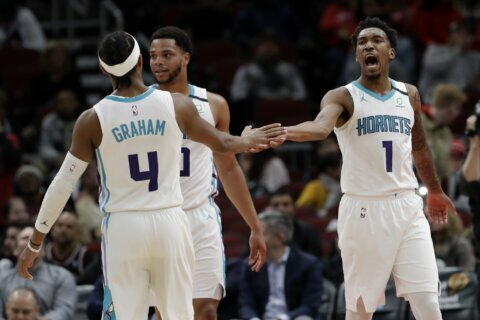