Going primetime: “The Jump” serving as pregame for ABC games

ESPN has gone through many pairings and approaches trying to build a pregame show during its 18 seasons broadcasting the…
Listen now to WTOP News WTOP.com | Alexa | Google Home | WTOP App | 103.5 FM

ESPN has gone through many pairings and approaches trying to build a pregame show during its 18 seasons broadcasting the NBA. This time it’s using a successful daily show.

The Rachel Nichols-led “The Jump” has been a daytime hit since debuting four years ago and is going primetime. It will lead off ABC’s Saturday night package, which begins with the Los Angeles Lakers visiting the Houston Rockets.

“To get the trust of ESPN to do something like this feels good. It’s not just me hosting pregame, but have the whole feeling and ethos of ‘The Jump’ from games,” Nichols said.

Nichols often takes “The Jump” out of its Los Angeles studio for a big game or newsworthy event, including the NBA Finals. The biggest change is the show will be cut from 60 to 30 minutes, but even that is a throwback to its roots as a half-hour program on ESPN2.

Mike Shiffman, head of NBA production for ESPN, said the ability of the show to be nimble and adjust to breaking news was one of the biggest draws to giving it a new platform. The best example of that was on the first day of free agency when “The Jump” was on for five hours.

“They had sort of a plan and then the news was taking it in another direction. It showed everyone’s ability to be able to quickly put everything in context when the entire landscape of the league was shifting,” he said.

“The Jump” built a steady following of fans and players, who watch it during the afternoon and see it as a way to connect either after practice or before games. Even before coming to ESPN for the first time in 2003, Nichols was well known for her contacts throughout the league with The Washington Post.

It also has given ESPN a show that can generate buzz akin to TNT’s “Inside the NBA.” Nichols left ESPN in 2013 and worked at CNN and TNT as an anchor and reporter for three years. She hosted her own show on CNN and got to see how things operate with their NBA coverage.

“Having gotten to learn from the inside has had us do that same thing sometimes on ‘The Jump.’ I learned so much from being around those guys on and off camera as well as the way they would let those discussions evolve,” Nichols said.

One of the bigger differences with “The Jump” is that Nichols’ mix of analysts feature not only former players but journalists and former front office executives. Kendrick Perkins, who is part of the rotating casts of analysts, says the variety has been beneficial.

“The mix gives it a different feel during debates. As a former player I can agree to disagree with a former player or great journalists or people who have been around the league for a long time,” he said.

Scottie Pippen and Paul Pierce have led teams to championships, Perkins had a solid career as a team enforcer and Tracy McGrady was a two-time league scoring champion.

“We can bear down and discuss serious topics but we can also be goofy, silly and lean into the fun of the league,” Nichols said. “The show is a real joy because it taps into my strengths. I have a track record of being a serious journalist and also being a goofball.”

Nichols would like to have some Jump features make it to the pregame show, but also realizes being on the court live could create some other spontaneous moments. During a Christmas Day show before the Lakers-Clippers game, Dwight Howard started talking to Pippen while the show was going on, and LeBron James gave a shoutout to Michael B. Jordan when the actor was being interviewed.

ESPN is also hoping that ratings begin to rebound during the second half of the season. The network is averaging 1.5 million for its broadcasts, which is down 15% from last year due to a rash of injuries.

Shiffman said that despite game ratings being down, digital content numbers are up.

The injuries at Golden State have also made this one of the more wide open title races in recent seasons, which could also increase interest near the playoffs.

“In the past you had a feel of who was going to win the title or be in the finals, certainly the past three years with Golden State,” Nichols said. “I just don’t think this year people would be willing to give blood and say who the two teams are that are going to be in the final. That’s cool.” 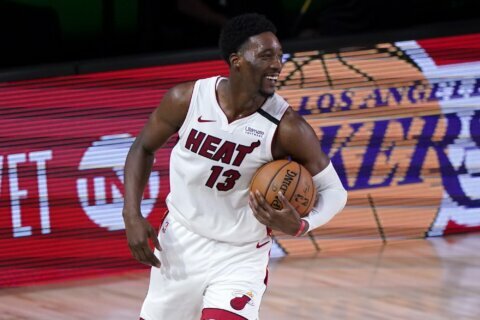 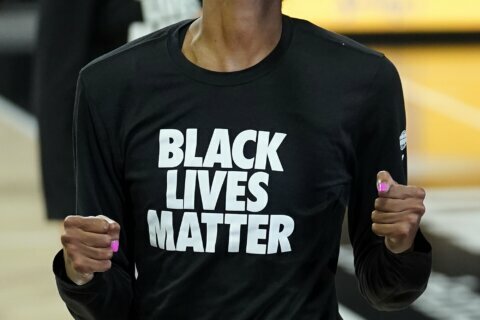