That sort of effort just isn’t paying off in the win column.

Marcus Morris scored a season-high 36 points and the New York Knicks held off Golden State 124-122 in overtime to snap a 10-game losing streak.

Golden State (5-21) trailed by 21 in the second quarter but roared back with a second-half rally. The Warriors still lost for the sixth time in seven games and fell behind the Knicks (5-20) for the NBA’s worst record.

“At halftime we were down 18, and we were sort of lifeless,” Kerr said. “We got back in the game pretty quickly in the third quarter. That’s a good lesson for young players in this league. It’s a really long game and you have to stay with it.”

The Warriors returned from a five-game road trip with optimism, seeing a favorable stretch of schedule ahead that offered seemingly winnable games at home.

Over the past three nights, however, they’ve dropped games to the Knicks and Memphis Grizzlies, who own a combined record of 13-36.

Julius Randle had 24 points and 13 rebounds, and rookie RJ Barrett scored 22 for New York, which fought off the Warriors’ comeback bid and gave Mike Miller his first win as interim coach.

The NBA’s two worst teams staged an entertaining fourth quarter, with D’Angelo Russell hitting a 3-pointer for the Warriors to tie it at 112 with 3.9 seconds left and force overtime.

New York controlled the extra period, with Randle’s 3-pointer snapping a 114-all tie and putting the Knicks in front for good.

The Knicks had their way inside in the first two quarters, shooting 58% and outscoring the Warriors in the paint 32-18.

Golden State’s cold shooting from Monday’s loss to Memphis carried over. Many of those misses came from close range, too, as the Warriors hit just 17 of their 51 shots (33%) in the first half.

Knicks: Miller, three games into his tenure after David Fizdale was fired, said the front office hasn’t given him any indication whether he’ll be leading the team for the rest of the season. “We’re in constant communication. They’ve been really supportive. It’s just been about getting to the next game. I’m fine with that,” Miller said.

Warriors: F Eric Paschall was listed as questionable Wedneday morning with a sore left hip, but he was in the starting lineup for the 19th time in Golden State’s 26 games. He scored only five points in just under 17 minutes and was taken out as a precaution when his hip acted up, Kerr said.

Barrett, the No. 3 pick in the draft who has battled through a shooting slump, watched video of his recent play and turned things around Wednesday, going 8 for 16 from the floor and finishing with 22 points for New York.

“I’m just trying to play basketball,” Barrett said. “Make the right plays and just get my mojo back, really.”

Knicks: At the Sacramento Kings on Friday, the third stop on this four-game road trip.

Warriors: Play on Friday at Utah, where they hung tough in November before losing by four. 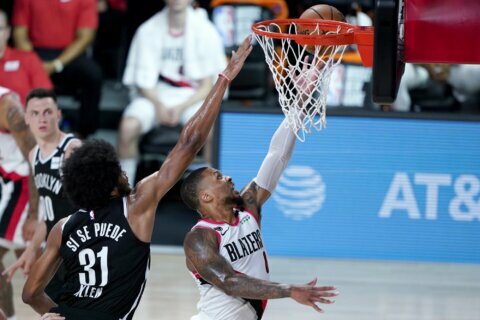 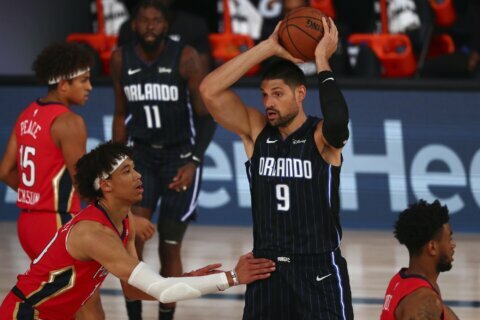 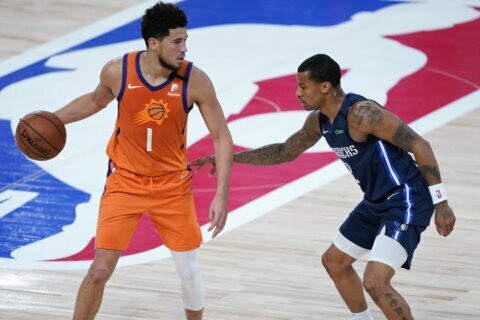 Suns top Mavs to finish 8-0 in bubble, but fail to advance