Analysis: Dwight Howard thriving in his smallest role yet

ORLANDO, Fla. (AP) — There were still a few boos when Dwight Howard checked into the game in Orlando for…

ORLANDO, Fla. (AP) — There were still a few boos when Dwight Howard checked into the game in Orlando for the first time, a few reminders of how every Magic fan still hasn’t forgotten or forgiven him for the way his stint with his first team ended.

There was a time when these things would have bothered him. No more. He just turned 34. He’s in his 16th season. And by all accounts, Howard — in his second stint with the Los Angeles Lakers, his sixth different franchise — has finally seen the light.

“This is a new day. This is a new moment,” Howard said. “I think it’s best if we all get out the past and focus on the moments we have in front of us.”

There’s a maturity to Howard now that frankly hasn’t always been there throughout his career. He’s on a team expected to compete for an NBA title. He’s earned the trust of LeBron James and Anthony Davis, the stars who collaborated in a quest to bring the Lakers back to prominence. He’s a role player, averaging career lows in minutes, points and rebounds.

He’s handled it perfectly. This isn’t his second chance. It’s more like a sixth chance.

“He’s thriving,” James said. “He’s thriving. It’s going to add more years on his career and it’s going to add an ingredient to our team for success because of the role that he’s accepting and he’s just making the most of it every single night. Defending at a high level, rebounding, blocking shots, catching lobs and with zero ego. Zero ego.”

This is Howard’s role now. He played in Orlando for the 10th time as an opponent on Wednesday night, he and the Lakers coming in and beating the Magic 96-87. Howard wasn’t called upon to do much; the Lakers were up 26-9 when he checked in for the first time, and he finished with two points and six rebounds in 18 minutes.

The other 30 minutes he spent on the bench, cheering and coaching. Past versions of Howard wouldn’t have done that.

“I never would have been the person I am today if I would have stayed here,” Howard said, sitting at his locker. “So I’m very thankful that everything that has transpired has transpired and it’s made me the best version of Dwight Howard.”

James and Davis will be the primary focus of this Lakers season, of course. Howard is one of many subplots, but so far, he’s been exactly what the Lakers wanted. He’s not a star anymore; he’s a guy who does dirty work.

“He’s at a place in his career where he had to adjust some things with regard to the role that he’s going to play on a team,” Lakers coach Frank Vogel said. “To me, it really fit what we were looking for. Had a great meeting in the summer. He’s really bought in and (is) bringing a seriousness about his business and his approach.”

Wednesday was a homecoming of sorts for Vogel, too, his first time back in Orlando since the Magic fired him after two seasons where the team had just about as many injuries as wins. Vogel said he hadn’t set foot in the arena since; he’s not bitter, he just turned the page.

Howard is taking the same tact.

The Lakers are his fifth team in five years — Houston, then Atlanta, then Charlotte with current Magic coach Steve Clifford, then Washington for nine games in what became a lost season a year ago, and now back in Los Angeles.

Howard says he’s loved every place where he’s played. And he still has an affinity for Orlando. But he said it took him until this past summer — seven years after his Magic tenure, which some still call ‘the Dwightmare’ ended — to get past the anger of things that were said once he basically forced the team’s hand into a trade.

“I never bashed or talked anything bad about this team,” Howard said. “But I did have a lot of bitterness in my heart towards the organization and even the fans of how they treated me when I came back. But I let it go. I was super bitter, but I let it go. And by letting it go, it just dropped all the weight that I had and it just made me a better person.”

The Lakers are 22-3. No team in the NBA has a better record. They look every bit like a title contender. Howard wanted to win a title in Orlando as a star. He might win one in L.A. as a backup, and is perfectly fine with that notion.

“I’m staying in this moment,” Howard said. “It’s the only moment that matters.” 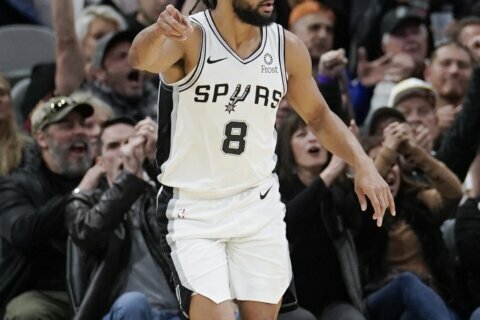