NBA players gathered for a teleconference with officials in the league, making their case about one of the biggest problems in the game: Fan behavior,
Listen now to WTOP News WTOP.com | Alexa | Google Home | WTOP App | 103.5 FM

About a dozen NBA players gathered for a teleconference with officials in the league office this summer, making their case about what they believe is one of the biggest problems in the game.

Fan behavior, they said, is getting worse.

The numbers show they’re right, and if that isn’t troubling enough race only adds to the complexity of the issue: Most NBA players are black, and it seems like most of those in the closest seats are white. Not every incident is racially motivated, though some clearly are.

After high-profile incidents involving Russell Westbrook, DeMarcus Cousins, Kyle Lowry and others last season — including ones involving racist taunts — zero tolerance for abusive or hateful behavior is now to become the NBA’s policy going forward. The league is changing and toughening its code of conduct for fans, especially putting those in closest proximity to the players and the court on alert that anything over the line will lead to ejections and possibly more.

“We’ve added any sexist language or LGBTQ language, any denigrating language in that way, anything that is non-basketball related,” said Jerome Pickett, the NBA’s executive vice president and chief security officer. “So ‘your mother’ comments, talking about your family, talking about test scores, anything non-basketball related, we’ve added that in as well as being something that we will go and pull a fan out of the seat and investigate what happened.”

Westbrook and Cousins were subjected to racist taunts in Salt Lake City and Boston and the fans involved in those incidents were banned by the Jazz and Celtics. Lowry was shoved by a minority partner of the Golden State Warriors’ ownership group, seated courtside during the NBA Finals, and that person was banned from team business for a year by the league.

There were more. Those were just the highest-profile ones. The NBA would not release exact numbers — and the totals are believed to be very low — but Pickett said the ejections of fans in the courtside area still more than doubled last season.

Westbrook declined comment for this story, saying through a Rockets official that he was not comfortable discussing the matter. But the players’ union insists that the problem is getting bigger and bigger.

“Last season, I began to sense even at the games I was attending that there was a certain, I’ll call it absence of civility, that permeated the games,” said Michele Roberts, the executive director of the National Basketball Players Association. “I was seeing more bad-mouthing opposing teams that were not simply ‘you suck,’ which every one of us will tolerate, but really nasty, nasty comments being directed at players.”

The Celtics banned a fan for two years for directing racist chants at Cousins. Westbrook was involved in a pair of incidents in Utah that came to light last season; was offended by a fan during the 2018 playoffs by a fan calling him “boy” before a playoff game, and then last season was involved in a back-and-forth shouting match with another fan.

The Jazz banned both fans for life, and Westbrook was fined $25,000 by the NBA for threatening the fan involved in last season’s incident.

“I try very hard not to have my default answer be, ‘It’s racism.’ I really do because I don’t think that necessarily advances the argument,” Roberts said. “If it’s undoubtedly that, then I’m happy to say it.”

It’s not always racism, either — Roberts also said she’s received complaints from many white players about being the subject of nastiness from fans.

Amira Davis is an assistant professor at Penn State specializing in 20th Century American History with an emphasis on race, gender, sports and politics. She believes fans feel more emboldened now to say whatever they like, without fear of repercussions.

“There have been plenty of sober fans yelling slurs and attacking players in the worst way,” Davis said. “I think it’s a mix of all of those things and when looking at predominantly white spaces like Utah and a largely black labor force, it ratchets it up a little bit more and makes it a lot more intense. Particularly in this political climate in which it’s very easy to project onto high-profile black athletes and pathologies and misconceptions about the black community.”

Fan behavior is not just a concern in the NBA. It is being noted everywhere.

Racist chants and taunts are a major issue in European soccer, including at a Euro 2020 qualifier between Bulgaria and England last week. Green Bay and Philadelphia fans fought in the stands at Lambeau Field last month. The Atlanta Braves had fans stop doing their “tomahawk chop” during the playoffs earlier this month. During the AL Championship Series between Houston and New York, Astros manager A.J. Hinch told umpires that he felt the behavior of fans at Yankee Stadium had crossed the line and that it “was becoming a dangerous situation.”

“There’s no place for that,” Hinch said, referencing matters like debris being thrown from the stands toward players and taunts directed toward some of the Astros. “Both teams will agree. And it’s really hard to stop fans from doing that. But it’s also very dangerous.”

And the athletes are not always just victims, either.

Golfer Bio Kim was suspended by the Korean PGA for three years for making an obscene gesture at the crowd during the final round of a tournament that he won, angry because of noise from a cellphone camera.

In the NBA, the league is expanding the area in arenas most closely monitored when it comes to player-fan interaction. The top-priority area used to be just those seated with feet on the court itself or maybe the first couple rows of courtside seats; now, that area goes several rows deep in every building, plus the areas where teams and referees enter and exit the court.

The fan code of conduct, a standard announcement at every NBA arena for years, is now being shown and promoted more times in each game. Season-ticket holders have been put on notice by teams that they may lose their seats even if they give their tickets to someone who goes over the line and harasses players or officials too vociferously.

Fans believed to have been involved in incidents will be removed from seats while officials investigate; many times, when a security guard asks those in a certain area what just happened, no one would volunteer information with the suspected heckler present.

“I think players are definitely vulnerable,” Golden State’s Draymond Green said after the Lowry incident. “Any time you’re in a situation where you can do no right, like in defending yourself, you’re vulnerable.” 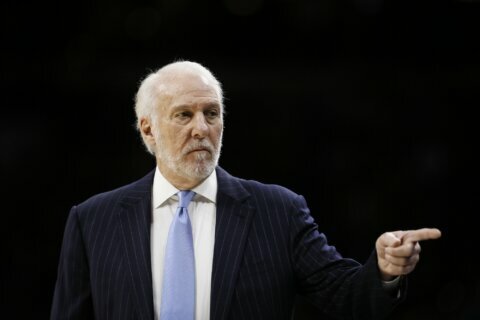 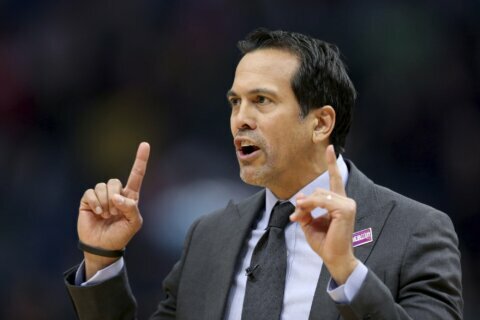 ‘Use our platform’: NBA coaches saying change must occur