For Celtics, USA World Cup camp is a preseason bonus

The Boston Celtics will have at least three and possibly four players on the final 12-man roster that USA Basketball will take to China next week for the FIBA World Cup.

Red, white and blue. The colors of USA Basketball.

Except this summer, green — Celtics green, to be precise — would work on that palette as well.

The Boston Celtics will have at least three and possibly four players on the final 12-man roster that USA Basketball will take to China next week for the FIBA World Cup. So these Team USA practices have been a get-to-know-you bonus of sorts for new Celtics guard Kemba Walker and Boston teammates Jayson Tatum, Jaylen Brown and Marcus Smart.

“It’s pretty cool,” Brown said. “It’s a blessing, of course. I take it very seriously to be able to represent not only your family and Boston but the country. We take it serious, and we come to play basketball.”

Walker, Tatum and Brown seem like locks to make the final U.S. roster. Smart is perhaps a question mark only because of a strained calf that he’s been dealing with since the first week of training camp in Las Vegas earlier this month. He’s expected to play Thursday when the Americans play a pre-World Cup exhibition against Australia in Melbourne — with a crowd of about 50,000 expected.

The U.S.-Australia game is at Marvel Stadium, the third-biggest stadium in the Australian Football League. Ed Sheeran packed a total of more than a quarter-million people in there for a series of four concerts last year, about 45,000 fans were there for a FIFA World Cup qualifier in 2013 and now another massive crowd is coming for a FIBA World Cup warmup.

“This definitely will be the most amount of people I’ve ever played in front of,” Milwaukee’s Khris Middleton said. “So I’m excited about it.”

For the Celtics, getting this time together before training camp in October is a clear perk — especially since Walker, who will take over for Kyrie Irving at point guard in Boston, could obviously benefit from extra time around his new teammates who all just happen to be very big parts of Celtics coach Brad Stevens’ game plans on a nightly basis.

But when USA is across their chest, they’re not thinking about what’ll be happening in Boston.

The non-Celtics teammates have made a bit of a running joke about Boston bonds being formed in USA camp, talking about how when they see multiple Celtics together they immediately send someone over to break them up. The reality, of course, is that Brown, Tatum and Smart were close already.

And Walker feels like he has the personality to fit in with anyone.

The games against Australia — the teams will meet again in Melbourne on Saturday — even get the Celtics a chance to face some former Celtics. Aron Baynes, a key player for Boston over the last two seasons before getting traded to Phoenix on draft night, is expected to be in the lineup for the Aussies.

“I played with Aron Baynes for two years with the Celtics and he was one of my favorite guys to play with, favorite people,” Tatum said. “So I’m excited to play against him, for a change.”

There will be other familiar ties during the U.S.-Australia games.

Among them: U.S. guard Donovan Mitchell and Australia guard Joe Ingles are teammates with the Utah Jazz, Australian center Andrew Bogut has been coached by U.S. assistant Steve Kerr when they’re together with Golden State, and U.S. coach Gregg Popovich will likely be seeing one of his longtime San Antonio players Patty Mills in uniform for the Australians.

Popovich sees these games as serious tests for the Americans.

“They are one of the teams that can win the whole thing, without a doubt,” Popovich said when asked about Australia’s World Cup chances. “I’m not saying that because I’m here. It’s just a fact.”

The Americans are taking these games seriously. Time is running out to get ready for their Sept. 1 World Cup opener in Shanghai against the Czech Republic, and Walker knows there’s much left to be done.

“Right now, we are just focused on getting our stuff down pat, the things we work on in practice, our plays, our defensive schemes, rotations, things like that,” Walker said. “We’re trying to clean those things up. Of course, we want to win. Both teams want to win. We’ll go out there and battle as much as we can, but the main goal right now is to get better game-by-game, day-by-day, practice-by-practice, leading up to China.” 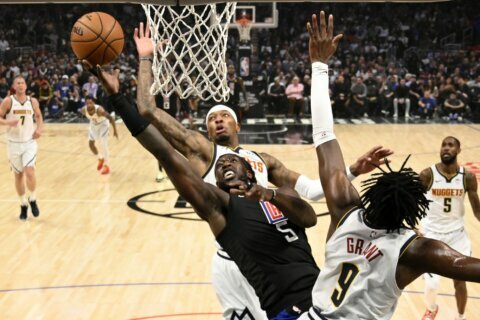 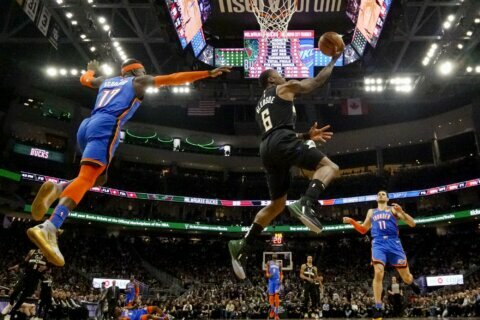 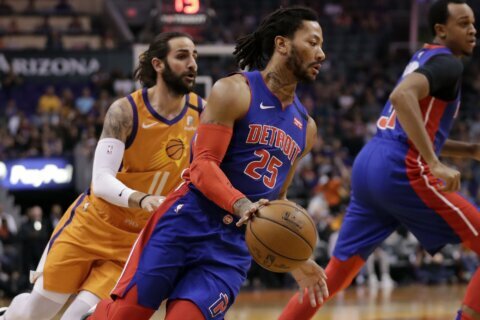