Time’s Up to halt operations, shift resources to legal fund

NEW YORK (AP) — The Golden Globes carpet typically glitters with crystal-studded gowns in pastel hues, but it looked different in January 2018: The ballgowns were black, and the night’s key accessory was a pin that read “Time’s Up.” Onstage, Oprah Winfrey brought guests to their feet with a warning to powerful abusers: “Their time is up!”

Five years later, Time’s Up — the now-embattled anti-harassment organization founded with fanfare during the early days of the #MeToo reckoning against sexual misconduct — is ceasing operations, at least in its current form.

A year after pledging a “major reset” following a scandal involving its leaders’ dealings with then-Gov. Andrew Cuomo amid sexual harassment allegations, the group tells The Associated Press that Time’s Up is shifting remaining funds to the independently administered Time’s Up Legal Defense Fund, and stopping other operations.

The decision, which board chair Gabrielle Sulzberger said takes effect by the end of January, caps a tumultuous period for an organization that made a splashy public entrance on Jan. 1, 2018, with newspaper ads running an open letter signed by hundreds of Hollywood movie stars, producers and agents.

Following the highly visible show of support days later at the Globes, donations large and small flowed into a GoFundMe to the tune of $24 million, earmarked for the nascent Time’s Up Legal Defense Fund. The following months saw the formation of the rest of Time’s Up, which promised a house-cleaning of an industry rocked by the stunning allegations against mogul Harvey Weinstein.

By January 2023, Time’s Up looked very different after a radical house-cleaning of its own — sparked by a damaging internal report — with only a skeleton crew and three remaining board members. Remaining funds now total about $1.7 million, Sulzberger said; the millions from the early donations already went to the legal fund.

“It was not an easy decision, but the board was unanimous that it’s the right decision and the most impactful way we get to move forward,” Sulzberger told the AP.

She and the remaining board members — Colleen DeCourcy and Ashley Judd, the actor and one of the most powerful early Weinstein accusers — will step down as Time’s Up Now and the Time’s Up Foundation, the two groups that formed what is commonly known as Time’s Up, shut down.

“Very simply, the Legal Defense Fund really reflects who we were not only at our inception but really at our core,” Sulzberger said. “We really just decided that at the end of the day, we needed to go back to our roots. (The fund) was the first initiative that we formed and funded, and remains at the heart of everything we stood for.”

The fund is administered by the National Women’s Law Center in Washington and provides legal and administrative help to workers, most of them identifying as low-income and 40% as people of color. Time’s Up Now and the Time’s Up Foundation had focused on policy and advocacy work.

Uma Iyer, vice president of marketing and communications at the law center, says the fund has helped connect more than 4,700 workers with legal services, and funded or committed funding to 350 cases out of just over 500 that applied.

Employment and civil rights lawyer Debra Katz, long among the nation’s most prominent attorneys dealing with sexual harassment cases, called the fund a crucial resource for survivors and their advocates.

“They understand these issues and they’ve always been completely survivor-centric and respectful of survivors,” Katz said of the National Women’s Law Center, with which she’s worked for decades.

But Katz, who represented key Cuomo accuser Charlotte Bennett, was highly critical of the Time’s Up organization, specifically former CEO Tina Tchen and former board chair Roberta Kaplan’s dealings with the Cuomo administration. Both resigned in August 2021 amid uproar over revelations they had offered advice after Cuomo was accused of misconduct and that Tchen initially discouraged other Time’s Up leaders from commenting publicly on allegations by accuser Lindsey Boylan.

“You cannot backchannel to corporations and entities and believe you were providing strategic advice when you’re also suing those entities because they’ve engaged in serious wrongdoing,” Katz said. “That’s what they attempted to do. It just erodes trust with survivors.”

Current Time’s Up leaders make a point of noting that the organization was instrumental in the fight for legislation increasing protections for workers, including extending the statute of limitations on rape in 15 states, and working toward achieving pay equity in women’s soccer. The group also worked on issues involving working families impacted by COVID-19, such as emergency sick leave.

“I have two adult daughters, and the kinds of issues that I faced as a young woman in the workplace, I feel Time’s Up has made a huge difference in moving that needle,” Sulzberger said.

Fatima Goss Graves, president and CEO of the National Women’s Law Center, paid tribute to “those bold and brave individuals who banded together in 2017,” saying they disrupted a power balance that was allowing abuse to continue.

“It is never easy to create something new,” said Graves, who also co-founded the Time’s Up Legal Defense Fund, “and their vision fueled a beacon for justice that we can all be proud of.”

Despite early fundraising success, Time’s Up was plagued by issues from the start, often accused of being too aligned with Hollywood’s rich and powerful — a theme of the early #MeToo movement overall. The group had leadership problems, too. In February 2019, CEO Lisa Borders resigned over sexual harassment allegations against her son. A bit more than two years later came Tchen’s and Kaplan’s departures.

Announcing its “reset” in November 2021, the organization made public a report prepared by an outside consultant that listed numerous deficiencies. Among them: confusion over purpose and mission, ineffective communication internally and externally, the appearance of being politically partisan, and seeming too connected with Hollywood.

Part of the problem, the report said, was how fast the organization grew, ramping up “like a jet plane to a rocket ship overnight.”

The staff was reduced to a skeleton crew and the few remaining board members spent a year, according to Sulzberger, listening to the group’s many stakeholders before making a decision.

Katz said it would be wrong to see the travails of Time’s Up — or any organization, for that matter — as a sign of weakness of the overall #MeToo movement. Quite the opposite, she said: It shows the movement’s resilience.

“As movements progress and become more mature they go through phases. But if anything, this shows the power of this movement because victims of sexual violence came forward and said, ‘We’re not going to countenance this (conflict) within our organization,’” Katz said. “It shows the power of individuals demanding clarity in their organizations and leaders.” 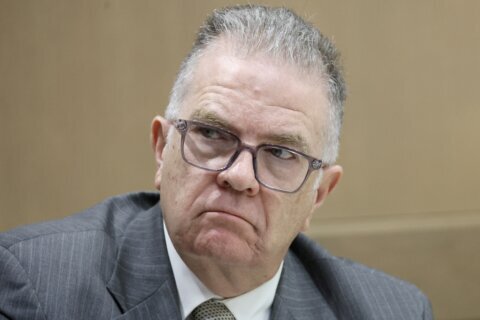