Annual tributes and commemorations of the life and legacy of the Rev. Martin Luther King Jr., which began nationwide Friday, typically include a mix of politics, faith and community service.

For this year’s observance, the 38th since its federal recognition in 1986, a descendant of King hopes to spur progress by helping more Americans personalize the ongoing struggle for racial equity and harmony. Bernice King, daughter of the late civil rights icon, said people must move beyond platitudes and deepen their own commitments to the needed progress.

“We need to change our thinking,” said King, who is CEO of The King Center in Atlanta.

Under the theme “It Starts With Me,” the center launched its slate of Martin Luther King Jr. Day events on Thursday with youth and adult summits to educate the public on ways to transform unjust systems in the U.S.

The summits were streamed online and are available for replay on the center’s social media accounts.

“It seems like we’re going through these cycles, because we’re trying to approach everything with the same mindset that all of this (racial inequity) was created,” King told The Associated Press.

“Change can be very small,” she said, “but transformation means that now we changed the character, form, and nature of something. That’s something we have not seen yet.”

King holiday weekend events include a statue unveiling Friday in Boston, a symposium on police brutality in Akron, Ohio, and community service projects in many U.S. cities. The holiday kicks off another year of advocacy on a racial justice agenda — from police reforms and strengthening voting rights to solutions on economic and educational disparities — that has been stymied by culture wars and partisan gridlock in Washington and nationwide.

Residents of Selma, Alabama, which played a central role in King’s legacy, woke up to extensive damage Friday from a deadly storm system that spawned tornadoes across the South. The city became a flashpoint of the civil rights movement when state troopers viciously attacked Black people who marched nonviolently for voting rights across the Edmund Pettus Bridge on March 7, 1965.

King wasn’t present for the march known as “Bloody Sunday,” but he joined a subsequent procession that successfully crossed the bridge toward the Capitol in Montgomery. The Pettus Bridge was unscathed by Thursday’s storm.

On Sunday morning, President Joe Biden is due to speak at a commemorative service at Ebenezer Baptist Church, the historic Atlanta house of worship where King preached from 1960 until his assassination in 1968. The church is pastored by the Rev. Sen. Raphael Warnock, who recently won election to a full term as Georgia’s first Black U.S. senator.

And on Monday, the federal observance of the King holiday, commemorations continue in Atlanta, as well as in the nation’s capital and beyond.

The Rev. Al Sharpton, who got his start as a civil rights organizer in his teens as youth director of an anti-poverty project of King’s Southern Christian Leadership Conference, will hold his annual King holiday events in Washington, D.C., and New York on Monday.

Sharpton announced Friday that Biden will deliver the keynote address at his breakfast gala in Washington. Martin Luther King III is expected to attend the event with his wife, Drum Major Institute President Arndrea Waters King, who will be honored alongside former House Speaker Nancy Pelosi.

Monday afternoon in New York City, Sharpton, the founder and president of the National Action Network, is scheduled to convene more than 30 prominent state and local elected officials for a public policy forum at the House of Justice, his organization’s headquarters in Harlem.

In the decades since its establishment, the King holiday has become an opportunity for elected officials and candidates seeking office to establish their civil rights and social justice credentials. Bernice King said partisanship among politicians has been a major obstacle to legislative solutions on civil rights.

Overcoming that is “going to require elevating to a place where your loyalty is to humanity, not to party,” she said.

“If we don’t find humane ways to create policies and implement practices out of those policies, we’re going to continue in this vicious cycle of a downward spiral towards destruction and chaos.”

Outside of establishment politics, many King holiday weekend events are opportunities for Americans to give back, reflect on the civil rights icon’s legacy or deal locally with racial discrimination in their own communities.

A massive monument to Martin Luther King Jr. was dedicated Friday in Boston, where the leader first met his wife, Coretta Scott King. In the early 1950s, he was a doctoral student in theology at Boston University and she was studying at the New England Conservatory of Music.

The $10 million sculpture called “The Embrace” consisting of four intertwined arms was inspired by a photo of the Kings embracing when King Jr. learned he had won the Nobel Peace Prize in 1964. It was designed by Hank Willis Thomas and MASS Design Group and was selected out of 126 proposals.

“They both loved this city because of its proud heritage as a hotbed of the abolitionist movement and its unique intellectual and educational resources,” their son, Martin Luther King III, said during the dedication. “And indeed, Boston became a place where they forged a partnership that would change America and make a powerful contribution to the Black freedom struggle. That’s what I see in this beautiful monument.”

Yolanda Renee King, who never met her grandparents, said she and everyone else are challenged to “carry forward” the couple’s “unfinished work.”

“This is the spirt we must keep as we commemorate (the King holiday),” the 14-year-old said, as those in attendance cheered. “Let’s make it a great day of community service; a day of brotherhood, a day of sisterhood; a day of using your platform for good; a day of love and healing in the spirt of this wonderful monument.”

Imari Paris Jeffries, executive director of EmbraceBoston, the organization behind the memorial, noted the significance of the sculpture’s placement at the Boston Common, America’s oldest public park and a high traffic area with millions of city residents and visitors walking its paths every year.

“I think Boston has this reputation of being this city of heroes and abolitionists, like W.E.B. Du Bois and Frederick Douglass, simultaneously with this reputation of not being friendly and in some cases being described as racist. So there’s this tension between these two images of Boston. Having the memorial there is part of our intention to transform our city’s perspective.”

In Akron, Ohio, the family of Jayland Walker, a 25-year-old Black man killed after police officers shot at him 46 times as he fled last July, will hold a symposium on public safety and mental health with local civil rights leaders on Saturday. Walker’s case received widespread attention from activists, including from the King family.

And for the seventh year, the W.K. Kellogg Foundation will mark a post-King holiday National Day of Racial Healing. On Tuesday, communities nationwide are scheduled to hold town halls to continue dialogue on healing that the foundation says is needed to achieve racial equity.

“Regardless of who you are, there’s a journey of healing that everyone must consider,” said La June Montgomery Tabron, CEO of the Kellogg Foundation. “We’ve all been impacted by racism.”

Associated Press writer Mark Pratt in Boston contributed to this report. Aaron Morrison is a New York City-based member of the AP’s Race and Ethnicity team. Follow him on Twitter: https://www.twitter.com/aaronlmorrison.

This story has been corrected to show that this year’s observance of the King holiday will be the 38th since its federal recognition, not the 37th. 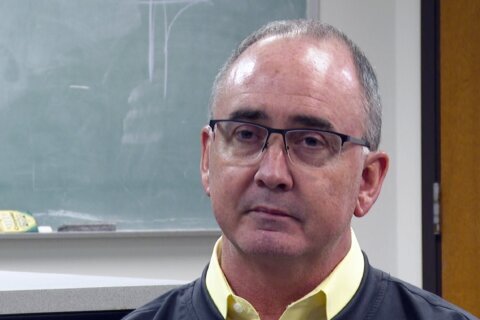