ST. ANTHONY, Idaho (AP) — An Idaho judge says a couple accused in a bizarre triple murder case will not be allowed to meet face-to-face to talk about strategy before they stand trial in April.

The judge refused some of the motions, like delaying the trial, and he said he would issue written rulings later on the others, EastIdahoNews.com reported.

Prosecutors say the couple used doomsday-focused religious beliefs to further a plan to kill her two children and his previous wife as part of a plot to steal social security funds and insurance money.

Lori Vallow Daybell and Chad Daybell have pleaded not guilty to murder, conspiracy and grand theft charges in connection with the deaths of 7-year-old Joshua “JJ” Vallow, and Tylee Ryan, who was last seen a few days before her 17th birthday. They are also charged in connection with the October 2019 death of Chad Daybell’s late wife, Tammy Daybell. They could face the death penalty if convicted.

A trial in the case is set to begin April 3 and last up to 10 weeks.

During Thursday’s hearing, Madison County’s prosecuting attorney Rachel Smith asked the judge to sequester the jury during the trial, keeping them isolated so that they are not influenced by outside information or opinions about the case. Smith said sequestration is hard but necessary given the widespread attention the case has garnered.

“This case involves the death of two children and the death of a mother of multiple children,” she said. “If there are no safeguards provided to jurors, given the attention of some of the citizen journalists on this case, we have real concerns about the integrity of this case.”

Lori Vallow Daybell’s attorney Jim Archibald and Chad Daybell’s attorney John Prior both objected to isolating the jurors, suggesting it would narrow the pool of those willing to serve and that local law enforcement could provide jurors with adequate security.

Boyce said he understood the positions of both sides but denied the request to sequester.

“I believe adequate steps can be put into place to not require sequestration during the course of the trial, and the court will take those steps very seriously,” Boyce said.

Chad Daybell’s attorney also asked that the trial be delayed, saying he is still waiting for potential DNA evidence to be returned from the Idaho State Lab. The current schedule doesn’t give the defense enough time to do their own DNA testing, Prior said.

“If I don’t get that evidence, Mr. Daybell is going to file an ineffective counsel against me. And as much as I like Chad, he’s going to do it, and he won’t hesitate to do it,” Prior said. “Then this case will be turned over because I was not provided an opportunity to adequately prepare.”

But the judge refused to change the date, saying his hands were tied because the two defendants are being tried in one case, and Lori Vallow Daybell has not waived her right to a speedy trial. Chad Daybell has waived that right.

Still, Boyce said he would not “force” Chad Daybell into a trial if he and Prior have not had enough time to review evidence that would help their case.

“If we are on the eve of trial and the state has exculpatory evidence and did not provide Mr. Prior enough time, at that point, the cases may be severed,” Boyce said.

The judge also rejected a request from Lori Vallow Daybell’s attorneys that she and her husband be allowed to meet in person and on the phone to discuss strategies and settlement options.

Fremont County Prosecuting Attorney Lindsey Blake said she had significant concerns about the idea, suggesting that if one defendant said something incriminating in front of the other defendants’ attorneys, the attorneys would become witnesses in the case.

Boyce said the meeting request was “an idea full of pitfalls,” and denied the motion.

Idaho law enforcement officers started investigating the couple in November 2019 after extended family members reported that the children were missing. During that period, police said the couple lied about the children’s whereabouts. Their bodies were found buried later on Chad Daybell’s property in rural Idaho.

Vallow Daybell is also separately charged with conspiracy to commit murder in Arizona in connection with the July 2019 death of her previous husband, Charles Vallow. He was shot and killed by Vallow Daybell’s brother, Alex Cox, who claimed it was self-defense.

The Arizona legal proceedings are on hold while the Idaho case is underway. 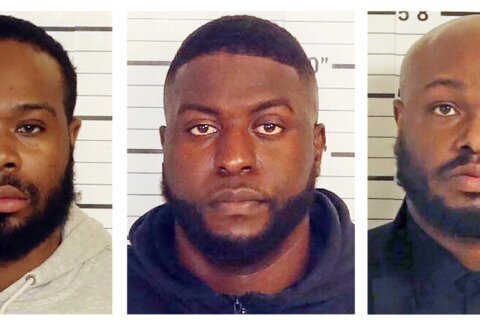