BUFFALO, N.Y. (AP) — Buffalo Mayor Byron Brown asked for a moment of silence on New Year’s Eve to remember those lost to tragedy in 2022. It was a year that had heaped miseries on the city, including a racist mass shooting in the spring, a deadly blizzard the weekend of Christmas and, just that morning, a house fire that killed five children.

Then, looking ahead to what he hoped would be a better 2023, Brown predicted a Super Bowl victory for the hometown Bills.

Football and the winning Bills had been a reliable bright spot for Buffalonians through their recent travails — until Monday night, when team safety Damar Hamlin suffered a cardiac arrest after making a hard tackle during a nationally televised game in Cincinnati.

Suddenly, a team that had been a beacon of good news became another source of despair.

The anguish on the faces of Bills players as they watched medical workers restart Hamlin’s heart was mirrored by legions of fans in a city still recovering from the catastrophic Christmas storm that trapped people in cars, left them freezing in powerless homes and killed more than 40 people.

Many in western New York had been looking forward to the game as a release after a week of trauma.

“The Bills are often like that warm hug,” said Del Reid, who owns a local apparel business and is a well-known team booster. “This hit the thing that is what gives us so much joy.”

The bond between Bills fans and their team grew particularly strong in the 1990s, as the region struggled with economic and population declines. That hardship coincided with the team’s heartbreaking heyday — a period when the Bills made it to four consecutive Super Bowls, only to lose them all.

The team’s recent run of success — they’ve clinched their fourth consecutive playoff berth — is reminiscent of that period, and expectations had been running sky-high before Hamlin’s frightening injury.

As Hamlin remained hospitalized in critical condition Tuesday, Buffalo found itself rallying behind a team that had sought to be a source of resiliency for its community.

After the white supremacist supermarket attack that killed 10 Black people in May, Buffalo Bills players and staff — along with those from the Sabres hockey team — arrived on buses to deliver meals, handshakes and hugs to the grieving neighborhood.

When as much as six feet of snow fell on some parts of the Buffalo region during a November storm, Bills players became the center of a feel-good story when they took to social media with accounts of neighbors digging them out so they could leave town to play – and win – their relocated home game against Cleveland in Detroit.

“This team has embedded themselves in this city,” Tom Calderone, chief executive and president of Buffalo/Toronto Public Media, which operates public radio and television stations in western New York and Canada.

While the NFL deliberates whether to reschedule the Bills-Bengals game, Bills supporters are focused on Hamlin’s health and looking for ways to honor the team.

Mayor Brown announced the dome of City Hall would be lit in red and blue Tuesday, the Bills colors “to signify our collective prayers for Damar Hamlin, his family, the Bills organization and his complete recovery.”

Canada’s Niagara Parks announced that nearby Niagara Falls also would be illuminated in blue.

Fans gathered outside the Bills stadium in Orchard Park twice Tuesday for prayer services, including one organized by the wife of retired Bills quarterback Jim Kelly.

“Within the last year, we’ve been through so much together, it’s just unimaginable,” one person said at the evening vigil, where others voiced similar messages.

“There’s an emotional connection to the city from our team,” general manager Kevyn Adams said.

Mary Friona-Celani, who founded the Totally Buffalo website and stores to celebrate the region, said she’s been inundated with requests for a No. 3 T-shirt from fans who want to show support.

“Sports is our relief from politics and tragedy and death and destruction and so we turn to it. And when this happened it’s just a sucker punch,” she said, “and then to see these big, strong guys crying and just so heartsick, how could you not be affected by that?”

People have also been donating in droves to a charitable fundraiser started by Hamlin, giving millions of dollars the day after his injury.

Calderone said that kind of generosity doesn’t surprise him.

“That’s what we do here,” he said of Buffalo.

After the deadly supermarket shooting in May, millions of dollars in donations poured in for the victims’ families and, for weeks, memorials swelled with flowers, candles and condolence notes. During the recent blizzard, residents in and around Buffalo supported strained first responders by rescuing neighbors stuck in the snow, taking them into homes, and donating vast amounts of food.

“The story is not, Oh, darn, all this stuff happens to Buffalo,” said Reid. “The story is, when something happens, Buffalo addresses it and does good. Buffalo comes through.” 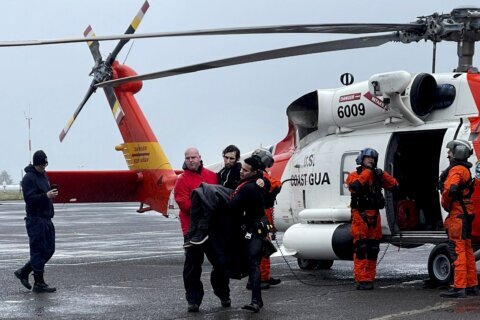