A special grand jury investigating whether then-President Donald Trump and his allies illegally tried to overturn his defeat in the 2020 election in Georgia appears to be wrapping up its work, but many questions remain.
Listen now to WTOP News WTOP.com | Alexa | Google Home | WTOP App | 103.5 FM

ATLANTA (AP) — A special grand jury investigating whether then-President Donald Trump and his allies illegally tried to overturn his defeat in the 2020 election in Georgia appears to be wrapping up its work, but many questions remain.

The investigation is one of several that could result in criminal charges against the former president as he asks voters to return him to the White House in 2024.

Fulton County District Attorney Fani Willis, who began investigating nearly two years ago, has said she will go where the facts lead. It would be an extraordinary step if she chooses to bring charges against Trump himself.

“Even if he’s acquitted by a jury, for him to face trial and to have a public trial with evidence on the record would be an epic thing for American history,” Georgia State University law professor Clark Cunningham said.

Here’s what we know as the special grand jury appears to be winding down:

Over about six months, the grand jurors have considered evidence and heard testimony from dozens of witnesses, including high-profile Trump associates and top state officials. A prosecutor on Willis’ team said during a hearing in November that they had few witnesses left and didn’t anticipate the special grand jury continuing much longer.

The grand jurors are expected to produce a final report with recommendations on potential further action. Fulton County Superior Court Judge Robert McBurney, who’s supervising the panel, will review the report and recommend to the court’s chief judge that the special grand jury be dissolved. The judges of the county Superior Court will then vote on whether to let the special grand jurors go or whether more investigation is necessary.

The special grand jury cannot issue indictments. Willis will decide whether to go to a regular grand jury to pursue criminal charges.

WHAT HAVE WE LEARNED ABOUT THE INVESTIGATION?

For more than a year after opening the investigation, Willis revealed little. But, ironically, once the special grand jury began meeting in June, its proceedings shrouded in mandatory secrecy, hints about where the investigation was headed began to come out.

That’s because whenever Willis wanted to compel the testimony of someone who lives outside Georgia, she had to file paperwork in a public court docket explaining why that person was a “necessary and material witness.” Additionally, anyone fighting a summons had to do so in public court filings and hearings.

In the paperwork Willis filed seeking to compel testimony from some Trump associates, she said she wanted to know about their communications with the Trump campaign and others “involved in the multi-state, coordinated efforts to influence the results of the November 2020 election in Georgia and elsewhere.”

“We learned from the identity of the witnesses that this is a far-ranging conspiracy that she’s looking at,” said Norm Eisen, who served as special counsel to the House Judiciary Committee during the first Trump impeachment and co-wrote a Brookings Institution report analyzing the “reported facts and applicable law” in the Fulton County investigation.

HAVE THERE BEEN SETBACKS?

A number of Trump advisers and allies fought Willis’ attempts to bring them in for testimony, but Willis prevailed in most cases.

“I think that augurs well for the pretrial skirmishing to come if she charges,” Eisen said.

Willis had a notable misstep when she hosted a fundraiser for a Democratic candidate for lieutenant governor even as her investigation zeroed in on the state’s fake electors, including Burt Jones, the Republican nominee for lieutenant governor. McBurney said that created “a plain — and actual and untenable — conflict” and ruled that Willis could not question or pursue charges against Jones, who won election in November.

WHAT’S BEEN THE FOCUS OF THE INVESTIGATION?

The information that has come out publicly has indicated that Willis was looking at the following:

— The abrupt resignation of the U.S. attorney in Atlanta in January 2021

WHAT ABOUT THAT INFAMOUS PHONE CALL?

In a Jan. 2, 2021, phone call between Trump and Georgia Secretary of State Brad Raffensperger, the president suggested that the state’s top elections official, a fellow Republican, could “find” the votes needed to overturn his narrow loss in the state to Democrat Joe Biden.

A month later, Willis sent letters to Raffensperger and other top state officials instructing them to retain records because she was investigating “attempts to influence the administration of the 2020 Georgia General Election.”

Trump told Raffensperger he needed 11,780 votes, one more than Biden won. That was a mistake, Cunningham said, because the specific and transactional nature of that comment makes it hard to say he was just generally urging Raffensperger to look into alleged fraud.

But other legal experts have said prosecutors could struggle to prove criminal intent, which requires showing that actions were taken purposely, knowingly, recklessly or negligently.

In her February 2021 letters to state leaders, Willis said she was looking into potential crimes that included “solicitation of election fraud, the making of false statements to state and local governmental bodies, conspiracy, racketeering, violation of oath of office and any involvement in violence or threats related to the election’s administration.”

Many believe Willis will pursue charges under the state Racketeer Influenced and Corrupt Organizations statute, commonly known as RICO. In a high-profile prosecution when she was an assistant district attorney, she used that law successfully to secure charges against Atlanta educators in a test cheating scandal. She has also used it more recently to target alleged gang activity.

The state RICO law, which is broader than the federal version, requires prosecutors to prove a pattern of criminal activity by an enterprise, which could be a single person or a group of associated individuals. It allows prosecutors to assert involvement in a pattern of criminality without having to prove that each person participated in every act.

Eisen said RICO seems “most commensurate with the nature of the people testifying and the questions that she wanted to ask.”

As the special grand jury was working, Willis informed some people that they were targets of the investigation, including Giuliani and the state’s 16 fake electors. It’s possible others received similar notifications but haven’t disclosed that publicly.

WHAT HAS TRUMP SAID?

The former president has consistently called his phone call with Raffensperger “perfect” and has dismissed the Fulton County investigation as a witch hunt.

Sheriff: 2 deputies who appeared at scene of Tyre Nichols beating have been relieved of duty pending internal probe 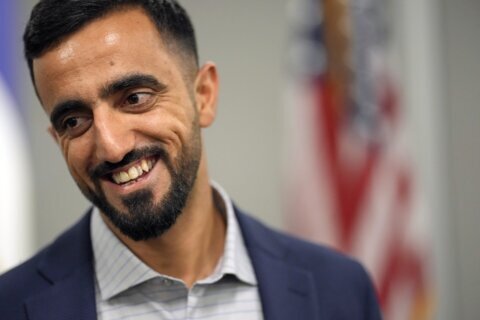